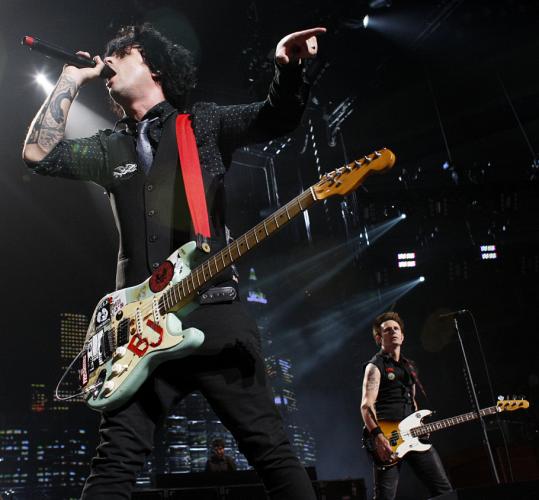 If anyone walked out of the newly rechristened TD Garden last night disappointed, it was not for lack of effort on Billie Joe Armstrong’s part.

The Green Day frontman was a tireless, one-man spirit machine. Over the course of a long, but rarely flagging, two-hours-and-10-minute show by the acclaimed pop punk trio, Armstrong successfully urged the sold-out crowd of 13,380 to jump, sing, wave, dance, and, much to security’s chagrin, flood the part of the floor that was general admission.

Before, during, and after each in the litany of hit songs contrasting political rage and personal angst, he exhorted the all-ages audience to seize the energy of the moment, many of which were punctuated by explosions and pyro bursts.

Some of those fans were seized themselves as Armstrong hauled a parade of folks onstage. There was a trio who each shouted through vintage hit “Longview.’’ A game young boy, willing to be “saved’’ during “East Jesus Nowhere,’’ executed a theatrical collapse. And, most impressively, one fan played guitar on the epic, twisting, “Jesus of Suburbia.’’

Most took a running dive off the central runway into the crowd’s embrace.

Armstrong’s bandmates, drummer Tre Cool and bassist Mike Dirnt - along with three sidemen who added welcome brawn, texture, and harmonies - contributed their own manic goodness to the proceedings with their tightly locked rhythms.

The group ricocheted from the staccato "Brain Stew" to the antic swing of “Welcome to Paradise’’ to the slips and slides of “Before the Lobotomy’’ to the arena rock anthem “21 Guns’’ with heart, skill, and surprising grace.

The group still radiates giddiness in the presence of its adoring audience and its ability to play in such large spaces. That they chose to indulge in some needless arena shtick - T-shirt cannons, audience volume wars - didn’t detract from the overall musical mission.

But the odd soul revival injection into “King for a Day,’’ which included “Stand By Me,’’ “Shout,’’ and a snippet of the Jackson 5’s “I’ll Be There’’ started to feel windy - and curious in juxtaposition with the more serious tunes from their recent “21st Century Breakdown’’ album.

The band played a half-dozen tunes from “Breakdown’’ and the audience lapped them up. The songs may have gotten longer and in some ways the imagery more elaborate, but at their core it’s the same bubblegum in a bullet casing that Green Day has always produced so craftily.

Openers the Bravery got a warm reception for their Cure-meets-disco yowl and shimmy.

Sarah Rodman can be reached at srodman@globe.com

Correction: Because of a reporting error, the review of the Green Day concert in Tuesday’s Metro section misidentified the song “Brain Stew.’’

Green Day at the Garden

Green Day with the Bravery At: TD Garden, last night