Young listeners tune out radio in search for new music 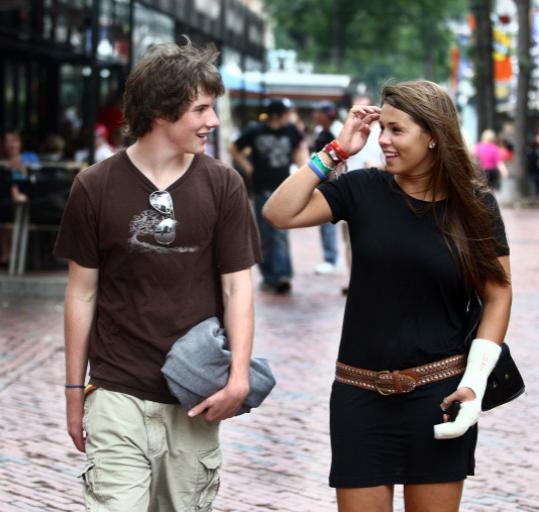 Browsing through new releases at a downtown record store, Chet Mohr of Somerville admitted that commercial radio is far down his source list for finding new music. Where precisely does radio rank? Somewhere between irrelevant and are-you-kidding-me, Mohr indicated.

“I’m into local bands and record labels, and they don’t get played on the radio much,’’ said Mohr, a 23-year-old guitar enthusiast and bank employee who hopes to form his own rock band. To broaden his musical palate, Mohr relies on bloggers, Internet message boards, web publications, friends, and social networking sites.

Sam Davies, 16, a student at Needham High School, searches for new iPod tunes on sites like Pandora Radio, an Internet service that streams customized play lists. Turn on the car radio? “Almost never,’’ Davies said. “I plug in my iPod. It’s got 6,000 songs on it.’’

For music-oriented terrestrial radio stations, comments like these have a distinctly funereal ring. Other than Radio Disney, KISS-108, and other stations appealing to grade-school and preteen tastes, or college radio stations with weak broadcast signals and niche audiences, the medium’s message can be summed up this way: change happens. And among its biggest consequences is the changing way younger people find new music they love - and love to share.

Has commercial music radio become so moribund it no longer serves as pop tastemaker whatsoever? Or does it just seem that way in light of last week’s announcement that WBCN-FM, once the agenda setter for an entire region of hip rock fans and record buyers, is switching to a sports-talk format? Is satellite radio, ad-free and genre-specific, the last, best hope for drawing trend-setting younger listeners to the radio dial?

In short, is music on the radio a lost cause?

While its viability hasn’t yet reached endangered species status, music radio does face many of the same challenges other mass media - including newspapers, magazines, and network television - are up against. New technologies and delivery options, more choices tailored to individual consumers, fragmented audiences that can find music they enjoy while bypassing glib-talking DJs and annoying commercials - all are factors driving programmers and station owners to retool themselves for the digital media age.

The trend toward more talk and less music on commercial radio isn’t exactly new, but it is accelerating, said Sean Ross, vice president of music and programming at Edison Research, which follows the radio industry.

“I have sat in many board rooms where the general sales manager says, ‘Let’s just put sports talk on the FM. I know I can sell that,’ and sometimes that’s what happened,’’ said Ross. He notes, however, that radio’s reach is still much broader than most people realize. “Radio still has the largest piece of music discovery, at least for all listeners. It’s like network television: It’s diminished, but it’s still bigger than anything else.’’

“Obviously people don’t need radio to provide them with music anymore. They’ve got other sources that can meet their individual needs much better,’’ Fybush says. “Odds are good that there will be even more of those sources in the future.’’

But radio still has advantages, Fybush maintains. “For anything that depends on reaching a mass audience - whether it’s a Red Sox play-by-play or good old-fashioned Top 40 radio - there’s still a very legitimate place for radio . . .

“There’s a middle ground between what the doomsayers are saying and the reality [of the situation]. If you give people in their teens and 20s a reason to listen, I think they will still tune in. It’s not like they don’t know what radio is.’’

Perhaps not. Nevertheless, the past five years have been busy when it comes to station format swaps, many entailing a switch from music to talk as the old commercial-radio model continues to lose power.

During one month in 2005 alone, for instance, four major-market Top 40 stations (in Washington, D.C., Philadelphia, San Diego, and Indianapolis) disappeared. More such transformations have followed. A Southern California station dropped its adults-standard music programming for talk aimed at women. Chicago’s flagship public radio station replaced most of its music programming with talk. One St. Louis station converted from dance music to sports talk, while a South Florida classical station dumped Beethoven concertos for public-affairs chatter following a survey showing that two-thirds of its audience preferred the latter. A Portland, Ore., station recently converted from hip-hop to sports talk.

Bradley Searles, founder of the Boston-based audioblog www.bradleysalmanac.com, says something has been lost during this period of change. “It always surprises me that radio stations had this direct feedback on who’s listening, whether through callers to their shows or events they stage or even ratings,’’ Searles says. Yet the sense of community once fostered by stations like ‘BCN has been diluted, he says, one result being a lack of breakout bands like U2. “I can’t remember the last massive culturally pervasive album,’’ he says.

For Kristopher Arcand, 24, who works for a Watertown marketing firm, finding Internet radio - his favorite site is www.last.fm - makes up for anything lost by tuning out commercial radio and its preset play lists. Arcand plugged into Net radio as a Boston University student and uses it to discover new artists whose work he then purchases on or iTunes.

“I’m not sure how relevant commercial radio will be to people of my generation in years to come,’’ says Arcand, calling this new media environment “the world we now live in.’’