Finding the keys to the heart of Jordan Hall 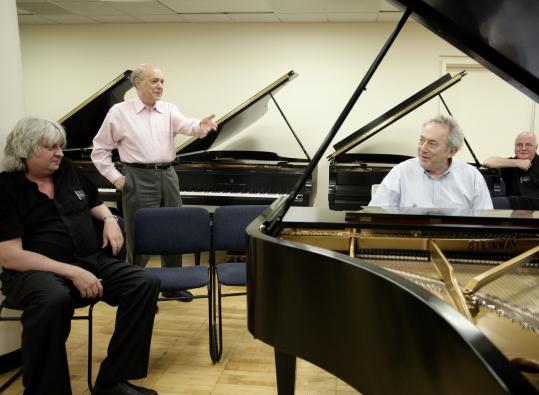 Victor Rosenbaum (second from left) and Gabriel Chodos (at piano), members of the piano faculty at the New England Conservatory, tried out instruments in Long Island City, N.Y. (Jennifer Taylor for The Boston Globe)
By Joan Anderman Globe Staff / May 24, 2009
Text size – +

ASTORIA, N.Y. - The brides-to-be wore black, were very well-tempered, and weighed in at a sleek 990 pounds. The question was which to fall for.

Everybody likes a looker, but character is what really matters. Does the instrument exude warmth and balance, and thrill with its brilliance? And what about depth? Does it seem made for a long-term relationship or better-suited for a fling?

Bottom line: You can't have it all. But when that piano is going to cost upwards of $100,000 and its keys will be tinkled by some of the finest pianists in the world, you have to try.

And so the conservatory team set to work, their afternoon unfolding like a weirdly provocative reality show set to Chopin and Philip Glass: six wildly different suitors trying to settle on The One.

Even the banter in the instrument-filled Selection Room seemed steeped in the language of romance.

"Piano Two has a sustaining quality that makes you want to linger, even though the sound is not physically as beautiful as some of the others," said department chairman Bruce Brubaker, a contemporary music champion.

"This one laughs. It smiles!" gushed Veronica Jochum, a convivial grande dame who could have been describing herself.

Victor Rosenbaum, who specializes in 19th century Viennese composers, noted that "Four has power, but also warmth. It has a soul."

"Piano One is for a fling," pronounced Gabriel Chodos, an imposing figure with a ferocious keyboard attack. "Four is for marriage."

Nobody much cared for Three and Five. Still, between lunch and dinner, everyone spent time with each of these 9-foot beauties.

The pianists circulated from instrument to instrument, playing passages both tender and forceful, taking breaks to pow-wow with their colleagues, query the technicians, and consider context, priorities, and potential. Most were seduced early on by one or another distinctive quality: a burnished tone, a responsive touch. And then they changed their minds.

For added drama, Russell Sherman, the conservatory's distinguished artist-in-residence , and his wife, Wha Kyung Byun - who is also on the faculty - missed their plane and had to drive down. The pair arrived at the factory - tired and testy - after closing time.

"This is very different from choosing a piano for yourself or for a particular concert," said Brubaker.

"I started to believe at the end of the day that one's own response to playing the instruments may have been less important than what you get hearing everyone else playing."

Each of the faculty members - esteemed concert pianists all - went into the process with personal agendas: Chodos is drawn to a brilliant sound, Byun insists on evenly balanced keys, and Rosenbaum went in looking for roundness and warmth. The other three had their own clear preferences.

But the collective task was to find a piano that would best serve the hundreds of artists who perform in Jordan Hall each year, and whose repertoires span the aesthetic spectrum. Versatility had to be the instrument's defining characteristic.

By midafternoon, the group had zeroed in on two instruments. Everyone seemed pleased, with the exception of Jochum, who had bonded with a different piano.

"My poor Number two," she moaned.

A pair of Steinway technicians rolled both pianos (the casters alone cost $3,000) away from the wall and into the center of the room, where the sound would more closely approximate that of a concert hall.

In fact, whichever piano they choose will sound dramatically different in the 1,000-seat venue where it's headed, which is why the New England Conservatory sent along its own piano technician, John Von Rohr, to assess the instruments.

In his estimation, one piano was too bright and raucous for Jordan Hall and the other was too dark and muted. But with voicing and regulation - adjustments to the piano's hammers and keys to heighten or dampen particular qualities - Von Rohr could, he said, make either one work.

Amazingly, everything changed with the pianos' new placement. A minute earlier, Rosenbaum had felt he could push for consensus ("perhaps we can all agree on Number Four?"), and then it shifted.

Sherman and Byun, meanwhile, were stuck on the Triborough Bridge.

"This one has a little acidity," she said.

And so it went, until Sherman stood up and announced the end of a strange day. Jochum and Rosenbaum were long gone, Chodos had left the room, and if you weren't paying close attention you might easily have missed the decisive moment, when Brubaker, standing next to the first in a line of five exquisite pianos with five remarkably distinct personalities, quietly said: "I think this is the one."

Jordan Hall's new grand piano will make its debut this fall. With hard use and the stresses of New England weather, it has an expected life span of 10 to 15 years. And it will have some good company: a $180,000 German Steinway, to be selected when Brubaker leads a small delegation to the Hamburg factory this summer. (It's nice, he says, to offer touring artists a choice, and European pianists often prefer a more familiar instrument.)

Yet for all the care and thought that goes into the selection of these instruments, there is also an element of faith. Like people, they develop and change over time.

"You go with your best gut about what you can live with over the long haul," said Rosenbaum, "but it's ironic to think about how quickly a piano can turn from the beloved new thing in your life to, 'How soon can we get rid of this?' "