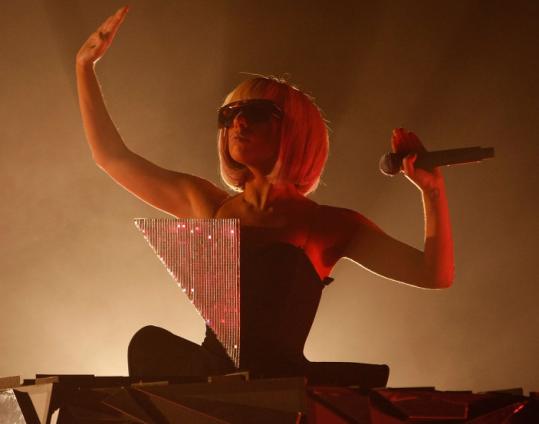 It seems impossible after just two hit singles that 23-year-old Lady GaGa is already a fully formed pop persona. Just a year ago she was in the embryonic stage of star development, desperately trying to get her songs played on US radio. Now she has women bravely replicating her wanton look - not easy on a chilly Monday night - and the requisite gay male groupies lustily mouthing the words to her songs. As she aptly demonstrated on Monday night during her sold-out Boston show at the House of Blues, she's not just the Gwen Stefani-esque electro-pop singer behind the hits "Poker Face" and "Just Dance." She's already a brand.

Opening her show as Candy Warhol in a short, over-the-top art film that segued into "Paparazzi," Lady GaGa (nee Stefani Joanne Angelina Germanotta) was not shy about showing her influences. Put Deborah Harry, Stephen Sprouse, Kylie Minogue, Donatella Versace, and Andy Warhol in a blender and you have something close to Lady GaGa. Wigs, choreography, and fashion - especially fashion - are just as important as the music.

She employs the requisite dance music tools of sexuality, fame, and disco torch songs to propel her message. But for GaGa, it all looks like well-planned art. She is playing a character, and playing it well. "People say some really terrible things about me," she huskily purred. "I've thought about it, and they're mostly true."

Lady GaGa made no effort to disguise the fact that she was singing along to tracks. During her encore, she even put down the mike to better focus on her dancing. She didn't bother with the pretense of bringing a band; she was accompanied onstage by a DJ and a trio of male dancers. But midway through the evening she arrived onstage in a knock-off Hussein Chalayan bubble dress, sat down at the piano, and belted out "Poker Face" in fine a cappella voice. It was about as vulnerable as she got. She stayed acoustic at the piano for a bawdy new song ("Future Love") before slipping back into full dance mode.

The combination of song and spectacle was crowd-pleasing and exhilarating. Her club-ready songs were delivered by a woman who is clearly studied, intelligent, and talented. It was more than could be said for her opening act. The White Tie Affair played a dreadful set that encompassed just about every rock cliche imaginable. Once-local band Chester French started the night with a charming and energetic combination of originals and covers such as "Remember (Walking in the Sand)."

LADY GAGA With the White Tie Affair and Chester French

At: the House of Blues, Monday night