In his hands, ukulele is more than a novelty 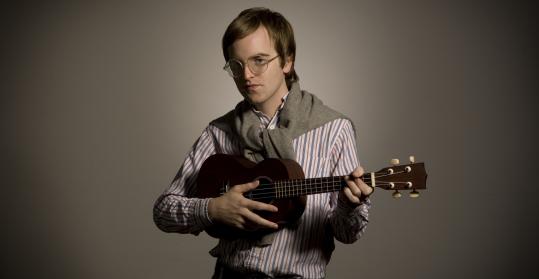 ''There are people who dismiss me completely because they're so angry that I play ukulele,'' says Dent May. ''I kind of enjoy polarizing people.''
By James Reed Globe Staff / March 11, 2009
Text size – +

Dent May knows that when you take the ukulele seriously, chances are most people won't take you seriously. And when you sing like a droll dandy - a swinging hybrid of Morrissey and Bing Crosby - and wear smoking jackets and Coke-bottle glasses that bring to mind Truman Capote after a hipster makeover, then you're really appealing to a niche audience.

"Definitely there are people who dismiss me completely because they're so angry that I play ukulele," May, 23, said last week from Rock Island, Ill., where he and his band had just finished recording a session for Daytrotter.com. "There's obviously this novelty to the instrument, but I like that aspect at the same time. I kind of enjoy polarizing people."

May's musical persona isn't as much of a put-on as his aesthetic would suggest, though. "My visual style is a little kitschy," May concedes, "but my record is super sincere and personal."

Indeed, his new debut, "The Good Feeling Music of Dent May & His Magnificent Ukulele," is a swinging-'60s valentine to underdogs, wallflowers, nostalgia, and misadventures in love.

It turns out May, who opens for A.C. Newman at the Paradise Rock Club on Saturday, has a soft spot for the down and out. He champions people like the protagonist of his song "Howard," a washed-up rock 'n' roll singer who's ready to live again. "Howard's going bald now/ He feels like a hack/ He thought that he was burned out/ But he's back." Over a breezy beat and tambourine taps, May sings and performs with such glee that it's impossible to feel sorry for the song's sad sack.

Other times May's social commentary can cut a little deeper, until you don't know if he's undermining or defending his characters. On "College Town Boy," a cheeky ode to the poor guy who's full of excuses about why he hasn't left, he does both: "College town boy/ How does it feel to be nothing?/ Since graduation day he feels like a fraud/ He still regrets he never studied abroad/ He's never been to Paris, never to Prague/ Oh, my god."

May had the idea for his debut long before he had the music. The album's title refers to the first CD he ever bought: "The Good-Feeling Music of the Big Chill Generation." It was essentially a knock-off of the soundtrack for "The Big Chill," an oldies compilation of harmony-drenched groups, like the Mamas and the Papas, that would later influence May's sound.

The Mississippi native remembers feeling a creative itch at an early age - singing in his church's youth choir, performing in school plays, taking voice lessons. He picked up his first ukulele, a toy version lying around the house, when he was about 7 years old, and the first song he ever learned, a cover of the Four Preps' "26 Miles (Santa Catalina)," appears on his debut.

Initially, May was drawn to the ukulele for its compact size - perfect for lugging around on trains rolling through the European countryside, of course. After he had graduated from college - and yes, he can relate just a little to that "College Town Boy" he lampoons in song - he bought a proper ukulele and started to play it in earnest.

"Immediately when I bought it, I knew that I was going to make a record on it," he says, adding that he also plays guitar and composes music on the computer. "I don't really play anything particularly well, though. I consider myself more of a songwriter than a musical-instrument guru."

He played with a few different groups before striking out solo, nothing too memorable, he says, though he did have a psychedelic country band called Cowboy Maloney's Electric City. True to his wild imagination, May once even dreamed up a concept album - about a 14-year-old fallen star of the rodeo.

But it was his ukulele project that got him attention, perhaps most notably from the members of Animal Collective. May befriended the band members when they were recording their latest album in Oxford, Miss., where May was living at the time. They caught one of May's shows and later signed him to their label, Paw Tracks.

May says he's open to new sounds and ideas - maybe a detour into R&B or electronic music, he says - but for now, he'll keep playing ukulele until people realize it's not a joke.

"I do think the ukulele deserves to be taken more seriously," he says. "It's misunderstood, but that's one of the reasons I wanted to play it in the first place."

DENT MAY & HIS MAGNIFICENT UKULELE

With A.C. Newman at the Paradise Rock Club on Saturday at 9 p.m. Tickets are $15; www.livenation.com.