Dresden orchestra takes note of the past 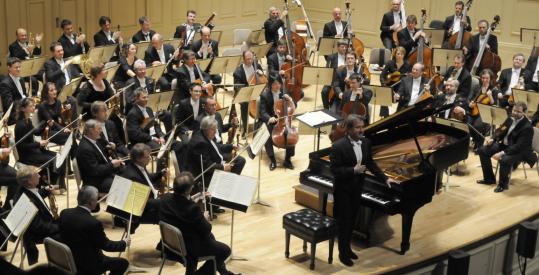 For the Dresden Staatskapelle, the past is a glorious place. Few orchestras can match its illustrious history and venerable sense of tradition. Founded in 1548, it counts Heinrich Schütz, Carl Maria von Weber, and Richard Wagner among its former music directors.

For its first visit to Boston under its current director, Fabio Luisi, the Staatskapelle brought a program that was also a nod to the past. Indeed you would be hard pressed to find a more conservative lineup: Beethoven's First Piano Concerto and Brahms's Fourth Symphony. There's nothing wrong with hearing familiar works, of course, as long as the performers can infuse them with new energy or throw unexpected light on them. On that score, however, the concert left a decidedly mixed impression.

The Viennese pianist Rudolf Buchbinder was the soloist in the Beethoven. He played in straightforward, strongly etched lines and with an understated sense of poetry. His boldest moments came in a surprisingly extroverted first-movement cadenza of his own creation.

The chief virtues of the performance were its lucidity and tight coordination between soloist and conductor. That said, their reading had little sense of adventure or rediscovery, and on the whole came off as rather square.

The Brahms - which the Staatskapelle played on its last visit to Boston, in 2005 - got off to a similarly uninspiring start. Beginning with a sloppy first phrase in the violins, the orchestra and Luisi seemed to meander through the first movement with little sense of forward momentum or overall shape.

Happily, things improved as the piece went on. A graceful slow movement offered a chance to appreciate the mellow, old-world sound of the winds, and the scherzo had a bracing edge. Most successful was the finale, written in the Baroque form of a passacaglia, a series of variations over a recurrent bass line. Luisi's grasp of the architecture of this difficult creation was sure, allowing each variation breathing room without losing the shape of the whole. The Staatskapelle's playing was dynamic and beautifully blended.

Perhaps the orchestra's clearest nod to its traditions came in the encore: the overture to Weber's "Oberon." The next time this orchestra visits, though, it would be nice to see them move out of history and a little further into the present.