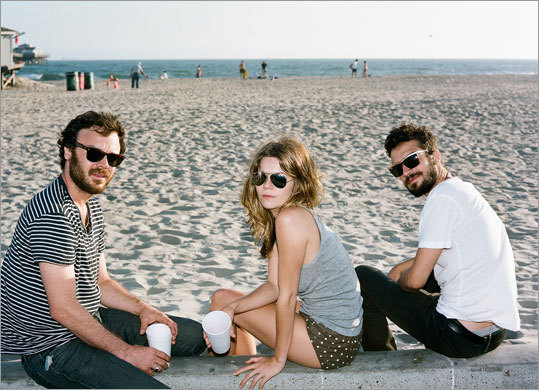 Fabrizio Moretti, last seen and heard pummeling the drums in the Strokes, has gone back to the basics, one road sign at a time.

"Wait. Guys, is everything OK?" he asks his bandmates, breaking away from his cellphone. "Are we going the right way?"

He's calling from a stop in Detroit, after a 35-hour van drive split among three people, and it's amusing to hear him talk about life on the road as a regular Joe. This time out he's not on a Strokes tour, where a driver - instead of a disembodied GPS voice - would figure out where the band needs to be.

"I got spoiled there for a second, man," he says. "And now it's back to the beginnings. It's actually kind of fun."

Moretti is a member - note: not the leader - of a new band called Little Joy. It's the second side project from a Strokes member since the band took an unofficial break two years ago, but it's the first one that really sounds like a departure. Strokes guitarist Albert Hammond Jr. has used his downtime to release two excellent solo albums, both of which share DNA with his most fa mous band.

Little Joy, which makes its Boston debut at T.T. the Bear's (just as Hammond did in 2006) on Sunday, is a foreign affair, literally. Moretti has teamed up with Binki Shapiro, who previously had no formal music experience aside from writing some songs for herself, and Brazilian musician Rodrigo Amarante, whose band, Los Hermanos, conveniently went on hiatus last year.

Together, they've made a charming, tenderhearted debut full of whimsical bossa nova and twinkling indie pop. For those ready to rock, look elsewhere. Little Joy is the sound of three friends casually making it up as they go along; you'd expect nothing less from a trio that takes its name from a neighborhood bar in sunny Los Angeles.

Moretti met Amarante at a music festival in Portugal two years ago when the Strokes were touring behind their latest album, "First Impressions of Earth." Amarante was there with his band, too, and when he introduced himself to Moretti, they realized they were mutual admirers.

Within a few months, Moretti and Amarante, who lives in Rio de Janeiro, were hanging out in LA and working on music with Shapiro.

"It was pretty mellow, kind of born of friendship more than some premeditated thing," Moretti says of their album. "We didn't go in and say, 'Let's make a record.' While the friendship between the three of us was growing, we were writing music. It was kind of like the songs were vehicles for us to get to know each other."

That they did. Moretti and Shapiro - "she was a friend of a friend who became the friend," Moretti says sweetly - started dating soon after they began to make music together. "We always kind of liked each other. We were secretly in love but never really wanting to tell each other."

The group's intimacy threads throughout Little Joy's self-titled album, with the three taking turns writing the lyrics and music and singing lead. A few guest cameos, from Devendra Banhart and Adam Green, crop up, but mostly three's company. A showcase for Shapiro, "Don't Watch Me Dancing" has an after-hours, Velvet Underground sensibility ("I'm Sticking With You" by way of "Pale Blue Eyes"). Amarante gets his due on the bare-bones bossa nova "Evaporar," sung entirely in Portuguese with just an acoustic guitar.

Coincidentally Moretti, who was born in Brazil and stayed there until he was 3, connected with the country's music, which he didn't really know but felt he should.

"When Rodrigo came over, he knew all these different chords that blew my mind," he says. "I was like, 'Wait a second. You don't have to just use power chords?' "

That could be a sly reference to the Strokes' brand of angular indie rock, but Moretti is too good-natured to slight his bandmates. Still, it brings up a good point. When you play in arguably one of the most popular bands of the past 10 years, adjusting to a smaller spotlight is part of the deal.

"Last night, we played to very few people, and it was a nice experience," Moretti says. "We invited everyone to bring their stools closer because they were all sitting in the peripherals. People seem to be enjoying it, which is cool, more than I had ever hoped for."

Mike Cummings, lead singer and guitarist for onetime Boston rockers the Dead Trees, has toured with both Little Joy and Hammond Jr. and has noticed the different reactions to the two bands.

"I think we were all anticipating super Strokes fans coming out to these shows, and I feel like Albert's music was a little more tangible for them," Cummings says. "But I find that some people don't know what to expect from Little Joy. I mean, the band is mostly Brazilian and has a lot of Tropicalia influences. A lot of people don't see that coming, and I think it's way more fun than people expect it to be."

If, as Moretti claims, it's not hard to be in a band with his girlfriend, does he at least feel pressure as the highest-profile member of Little Joy?

"No, not at all. There's no real ego in this band, but they're proud of me for my past," he says. "Let's be frank: There are some things that wouldn't be as readily available to us had I not been in the Strokes."

Moretti confirms the Strokes are meeting up in February with the idea of starting a new album. "I'm excited," he says. "I feel like I haven't seen those guys in forever and a day."

At T.T. the Bear's, 10 Brookline St., Cambridge, on Sunday, with the Dead Trees and Buttercup opening at 9 p.m. Tickets are $10 at www.ticketweb.com.