Hanley in the middle

Miley Cyrus gets tour support from an unlikely new friend 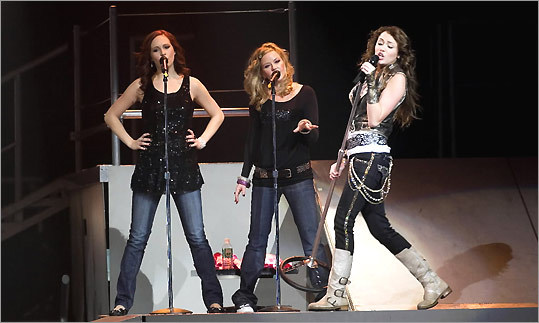 HARTFORD - Kay Hanley is scurrying down the aisle in the Hartford Civic Center, 10 minutes late for a 4 o'clock sound check. She shoves in her ear pieces, secures her remote monitor, and whips around.

"You are gonna laugh so hard when you see what I'm doing in my new employment," she says. "Choreography."

Hanley, who fronted the '90s Boston rock band Letters to Cleo, has a new job: backup singer on the Hannah Montana concert tour. Actually, it's the "Hannah Montana and Miley Cyrus: Best of Both Worlds Tour," an offshoot of the wildly popular Disney Channel show about an awkward teenager (Miley) who moonlights as an awesome pop star (Hannah). The tour, which rolls into the DCU Center in Worcester for sold-out shows tonight and tomorrow afternoon, has taken the nation by storm - or at least the slice of it between the ages of 8 and 14 and, critically, their parents, some of whom have ponied up $2,000 for tickets.

It may know how to build a tween juggernaut, but even the well-oiled Disney machine has no power over weather and traffic. The caravan of 14 tour buses has arrived later than expected, and Miley - the 15-year-old daughter of country star Billy Ray Cyrus - is missing sound check today. There are meet-and-greets with contest winners to get to and television spots to tape in the arena's media room - which happens to be next to the band's dressing room, where Hanley holes up after test-driving her microphone. It's time to transform herself into a glittering, ringleted, rosy-cheeked cog in the Hannah Montana machine. Occasional choruses of blood-curdling screams seep through the walls; Miley has materialized in a roomful of girls. Security comes in to shush us; TV cameras are rolling.

Hanley has other concerns - namely, her hair. It's 4:30, and the singer's blond locks appear to have just come out of the toaster, which might be the perfect look on stage at the Paradise Rock Club, but the jumbo video screens on the Hannah Montana tour tell a different story.

"I'm a disaster," Hanley pronounces. "Not for long, though. Miley's hair guy gave us his super-duper curling iron."

One by one, various band members arrive in the dressing room. Stacy Jones, who played drums in Letters to Cleo and fronted American Hi-Fi, is this tour's musical director and drummer. Now an LA-based producer and musician, Jones hired Hanley for the job; he also recruited American Hi-Fi guitarist Jamie Arentzen, to play in the band. One after the other they look for the bathroom. There isn't one. There is: an electric kettle, tea, honey, Emergen-C, Life Savers, and several packs of Bubblicious gum neatly laid out on a table. "We didn't get our rider together," Kay cracks.

The band's stage clothes hang on a rack. Jones chooses a Motorhead T-shirt. Hanley and the other backup singer, Candice Accola, have to wear the same thing every night: a white top, jeans, and silver flats during the Hannah Montana set; a black top, jeans, and dark flats during the Miley Cyrus set. Hanley has agreed to wear long sleeves to hide the tattoos on her forearms: "Zoe Mabel" and "Henry Aaron." Zoe and Henry's mother had seen every episode of "Hannah Montana" before being hired to sing with her.

After two months on the road, Hanley hasn't yet mastered the art of the curl. She shows off a nasty burn on her neck - this is a riskier gig than it seems - and bravely plugs in the iron. "Now you will see what I do with my life every day."

At 5, midway through the hair-curling marathon, we duck out to the commissary for coffee and food, which Hanley will eat with one hand while curling with the other. There is: fried chicken, prime rib, red snapper, rice, zucchini, asparagus, and salad. Adjacent to the buffet is a sumptuous array of meds, from Sudafed and DayQuil to B-12 vitamins and Alka-Seltzer. Everyone's been fighting a bug.

"This is the best gig I've ever done," says Jones. "If you're sick, they bring in a doctor. A real doctor, not a rock doc, who shows up and gives you whatever drugs you want."

At 5:30, with a pile of miraculous curls on top of her head, Hanley heads out to the cavernous garage for a cigarette, but the Jonas Brothers' bus is pulling in and she doesn't want the clean-living siblings to see her smoking. The clueless reporter is shocked to see that they all wear wedding bands, even the 15-year-old. "They're purity rings," Hanley whispers. "Nice sweater, Kevin," she tells the eldest Jonas, giving him a hug. Hanley seems to hug every one of the 121 people on this tour over the course of an afternoon.

At 6:30, while Hanley is putting on more makeup in one application than she wore during the entire 39 years of her pre-Hannah Montana life, Miley is spotted riding piggyback into the commissary. Moments later, Harry Connick Jr., his wife (and ex-Victoria's Secret model) Jill Goodacre, and their three daughters are whisked in through the service entrance for a private audience. This concert is a hot ticket for celebrities with kids; Hanley has seen Troy Aikman, Chris O'Donnell, Reese Witherspoon, and Faith Hill, broods in tow, in various front rows.

The Jonas Brothers open the show at 7, and the screaming begins in earnest. The band changes clothes (the girls face the wall to slip into their shirts) and start to stretch their voices and limbs. A guy pokes his head in to give 30-minute, 15-minute, 4-minute, and 1-minute warnings. At 7:45, the band and dancers traipse from their dressing rooms and gather under the stage.

Miley-as-Hannah arrives last, a willowy vision in her blond wig, mirrored tunic, and colossal smile, to lead the group in "the circle," which looks a lot like a high school pep rally. They whoop and yell and jump. They hold hands, shuffle en masse into the center, and shuffle back out. Miley starts chanting and everyone joins in: "Hartford! Hartford! Hartford!"

The show is, in a word, sparkling. The microphone stands sparkle. The costumes sparkle. Hanley, who busts her synchronized moves with nothing short of vim, sparkles. By contrast, Miley's 7-year-old sister, Noah, perched on a cabinet between the sound man and her mom, looks a little bored. The Cyrus girls' mother, Leticia, quietly sings along, while 15,000 or so young girls yell the words to the songs, frantically waving homemade posters and cellphones.

And then it's over. The band, soaked in sweat, hasn't been back in the dressing room for more than five minutes before the road manager shows up: "I was hoping you'd be on the bus by now," he says. Hanley scrambles for her coat - she and Miley bought matching Marc Jacobs jackets on a day off in Seattle.

"I miss my family like crazy," Hanley says. "But compared to my regular life? This is like being on vacation."

Joan Anderman can be reached at anderman@globe.com. For more on music, go to boston.com/ae/ music/blog.