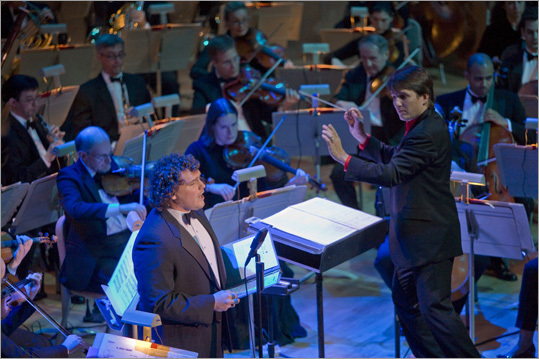 Like some sort of Yuletide bat-signal, the giant snowflake on the roof of Symphony Hall means that Holiday Pops has returned: conductor Keith Lockhart and the Boston Pops, along with the Tanglewood Festival Chorus and a few guests, kicked off this year's run on Monday.

The main work in the classically-oriented first half was the rich, sometimes moody tapestry of Ralph Vaughan Williams's 1912 "Fantasia on Christmas Carols." Kyle Ferrill sang the solo part with a smooth baritone, and the chorus made hauntingly beautiful sounds, but the music rose towards a grandeur that never arrived. Throughout most of the evening, Lockhart conducted with staccato gestures, giving the orchestra a mark to hit rather than a path to follow. Anything with a strong rhythmic drive was sharp, but where the life of the phrase was between the beats, the intensity often flagged.

Whether it was the addition of a rhythm section or the generally looser demeanor of the material, Lockhart and the ensemble showed more flexibility and flair in the second half, kicked off with a snazzy Don Sebesky carol medley that turned the opening of Handel's "Hallelujah" into a funky horn riff.

Among much familiar, jazzy ground, two Pops novelties debuted. The token Hanukkah number, an arrangement of Peter, Paul, and Mary's stultifyingly banal "Light One Candle," may safely be added to the long list of indignities suffered by the Jews throughout history. But David Chase's choral-showpiece reworking of "The Twelve Days of Christmas" was the evening's biggest crowd-pleaser. Each day's gifts are grafted onto a musical quotation: "five gold rings" to Beethoven's 5th, "seven swans a-swimming" to Saint-Saëns' "The Swan," etc. (Most of the appropriated pieces were fairly predictable, but "Bohemian Rhapsody" was a pleasantly surreal surprise.)

Leroy Anderson's "Sleigh Ride" was a shade too fast to really swing, but it again proved an indisputable masterpiece of 20th-century music. Santa made his entrance on the heels of a fine Darmon Meader-arranged medley (although hearing a full choir sing "Santa Baby" is rather like being seduced by a pro wrestler). A sing-along and a couple of encores — including a downy "White Christmas" that featured perhaps the night's best playing — sent everyone home with fizzy good cheer. In its 35th season, Holiday Pops is as indestructable as ever.