Refrain of the nerds

In this hip-hop universe, science - not violence - is what they rap about

Hip-hop's evolution from genre to brand has included just about everything: clothing lines, movie roles, even NASCAR endorsements. It's easy to forget its origins are rooted in sharing a message, a lifestyle, and a story.

Under the guise of MC Hawking, Ken Leavitt-Lawrence has a story, too. The 36-year-old Web developer from Gloucester is a self described geek with a penchant for "Star Wars" and Led Zeppelin. More important, he is part of a growing crop of "nerdcore" hip-hop artists garnering buzz for rapping about computer science, video games, and comic books.

Coined in 2000 by movement pioneer Damian Hess, a.k.a. MC Frontalot, who opens his fall tour with a show in Providence Thursday and then comes to Harpers Ferry in Allston Friday, nerdcore includes artists who have earned degrees from Ivy League schools, as well as those who haven't even graduated high school.

What connects them is a DIY approach and an underdog's passion for self-expression - whether to share the struggle of being bullied or of studying for PhD exams.

As MC Hawking, Leavitt-Lawrence uses a text-to-speech program to imitate researcher Stephen Hawking's digitized voice. He mixes self-produced beats and live instrumentation that he records at a studio a few miles away from his duplex. While he acknowledges a certain amount of parody to what he does, it's a craft he takes seriously. He says he spends hours researching such concepts as entropy and natural law to use for his rhymes.

In one song, Leavitt-Lawrence takes on creationists with the lyrical jab "upon blind faith they place reliance/ What we need more of is science."

With a sharp delivery, MC Hawking has skill behind the mike, but it's unlikely that will translate to Top 40 radio success. Because Leavitt-Lawrence's Hawking persona is confined to a wheelchair, he can't even take his act on the road. It's that idea - Stephen Hawking rapping - that reveals the genre's narrow if quirky appeal.

At 33, Hess is a nerdcore veteran - and among the rappers with the most crossover appeal. Marketing and releasing his music independently, Hess has sold about 7,000 albums in fewer than two years, just enough to pay for groceries and rent. With percussion-heavy beats and a confident flow, his music tackles everything from homophobia and the indie-music scene to getting older.

"The whole nerd narrative is alienation and powerlessness," he says from Brooklyn.

Hess recognizes nerdcore's potential - and also its limitations. "If [nerdcore was] to make record-company money, it'd have to become 15 or 20 times bigger if they marketed it carefully," he says. "When you're coming up through the Internet, you're not following the traditional model for music. For me, I just sat by a computer to see who would bite. I didn't do any touring until there were lots of fans e-mailing me all the time."

What may surprise many listeners is not where nerdcore differs from mainstream hip-hop, but where the two converge. In nerdcore, rap rivalries, a staple of mainstream hip-hop, are fought on message boards like rhyme torrents.com instead of face to face. Threats are also refracted through a nerd prism. "[In nerdcore], it's all about 'I can find your Social Security number; I'll find out where you live,' " says Dan Lamoureux, director of the upcoming documentary "Nerdcore for Life," which chronicles the stories of several nerdcore rappers.

Another similarity bolsters nerdcore's cred: Some artists have rap sheets. Bryce Case Jr., who performs as YTCracker, is a 25-year-old high school dropout from Colorado Springs who was investigated by multiple federal agencies for hacking into a NASA website - at age 17.

"I was a 17-year-old kid with some spare time," Case says on the phone from Colorado Springs, where he runs an independent record label, Nerdy South Records. "The legitimacy of the genre is determined by the people in it."

Lamoureux recalls a memorable time when he was filming at the Consumer Electronics Show in Las Vegas in 2006, at which many nerdcore rappers, Case among them, performed.

Dan Maynes-Aminzade, 28, who records as Monzy, had famously been embroiled in a public rivalry with MC Plus Plus, both so-called CS rappers, named for their backgrounds in computer science.

"I don't think either one of us ever took it seriously," he says. "The rivalry was a fun focusing point."

Most artists do get along, and Maynes-Aminzade says rivalries contradict one of the core tenets of nerdcore: acceptance. "The good thing about nerds is when you're at the bottom of the social hierarchy, you're not really in a position to judge," he says jokingly.

Maynes-Aminzade, who holds a master's degree from Massachusetts Institute of Technology and is now earning his PhD at Stanford University, mines lyrical inspiration from studying for exams, writing papers, and taking classes. A YouTube video showing him rapping for a crowd at Stanford last summer has received more than 200,000 hits.

Despite the exposure, Maynes-Aminzade sometimes questions the nerdcore narrative of struggle, noting that "nerds lacking a voice is a very old and a very classic scenario - just look at 'Revenge of the Nerds' or 'Superbad.'

"I don't feel terribly oppressed," he adds. "All the people around me are nerds, but they are going to get good jobs and be successful. . . . But I can see why my nerdcore resonates with some people [because] I'm not going to hold you up to the standards of what's cool."

"People doing nerdcore have a lot of voices, a lot of avenues to express themselves. . . . That's an important distinction between early hip-hop and early nerdcore."

Still, there's criticism that nerdcore is too much parody and not enough substance. Some argue that because most nerdcore rappers are white, the genre could even be construed as racist. "I think there's definitely a strong potential for a major backlash from mainstream hip-hop fans," Lamoureux says. "I can easily see how people can take the wrong point away from the whole thing."

Since so many of the artists have backgrounds rooted in the suburban middle class, critics say that they are afforded other avenues to express themselves. But Maynes-Aminzade says even though he can't relate to mainstream hip-hop culture, it's a pursuit worth continuing.

"I've always looked at it as an homage," Maynes-Aminzade says. "For me, I've always thought, 'Wow, wish I was as cool as these rappers I've listened to.' At the same time, the struggles that they write about don't really resonate with me or my life. . . . To me, it's about spinning [hip-hop] to something that's meaningful to you."

But some are not happy with nerdcore's growing buzz. Chris Ward, 32, who performs as MC Chris, is attempting to distance himself from a genre some say he helped pioneer. He had a stint on this summer's Warped Tour, and his music is among nerdcore's most accessible, featuring his slightly high-pitched voice and Kanye-like beats.

"It's kind of one of those things that perpetuates itself where the only people in the audience are the people making the music. . . . I'm afraid of being demoted by comparison, [of being] lumped into this group that's kind of dismissible," he said recently before his sold-out show at the Roxy.

Some of Ward's earlier work includes "Geek," a song about a victim of bullying who enacts revenge by bringing a gun to school. "Stop pickin' on me/ Because I'm a geek/ I'm strange to you/ You're strange to me/ Well, one of these days, I'm gonna pack heat" goes the chorus.

Not all nerdcore artists are concerned with such heavy material. Andrew Robert Nielsen, who performs as MC Lars, has a sound that's more pop-punk and less hip-hop. Despite criticism of nerdcore, Nielsen fiercely defends his craft. He runs an independent label that has a distribution deal with and counts Public Enemy and KRS-One as influences. He says most rappers within the nerdcore community are serious hip-hop fans with a deep respect for the culture.

"There's so much unspoken history just by picking up a mike and rhyming over a break beat," he says. "And it's a history that can't be ignored." 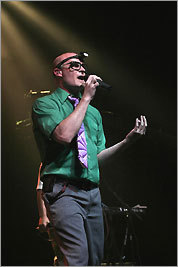 MC Frontalot is one of nerdcore hip hop's figureheads, having coined the genre in 2005. (Tom Mathews)

MC Frontalot performs at Harpers Ferry on Nov. 11 at 8.