Documentary shorts are all worthy choices 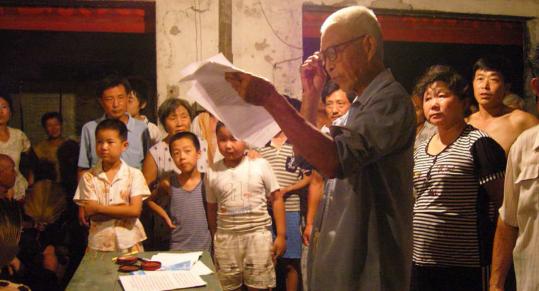 Screening the five 2011 Oscar nominees for best documentary short one after the other may have an unintended consequence: compassion fatigue. The quintet of 40-minute films, unspooling in two programs at the Coolidge starting today, tackles hard real-world issues and calls attention to desperate situations and individuals, and while your heart may be wrenched and your outrage stirred, they’re also spread thin. These are all worthy films about worthy struggles, and this probably isn’t the best way to see them.

That said, Program A has the three strongest works. Jed Rothstein’s “Killing in the Name’’ focuses on Muslims who are speaking up against international terrorism, specifically Jordan’s Ashraf al-Khaled, who, after losing 27 relatives when his wedding reception was bombed in 2005, has become a globe-trotting force for truth. If the non-discussion between him and an Al Qaeda recruiter (who won’t meet with al-Khaled in person) is a frustrating display of fanatic’s logic, an encounter at an Indonesian madrassa offers some hope.

“Sun Come Up,’’ directed by Jennifer Redfearn, ponders what happens to a people when their homeland vanishes. The thousand or so natives of the Carteret Islands in the South Pacific are among the world’s first casualties of climate change, forced to relocate as the ocean engulfs their tropical paradise. The film becomes a “brother’s keeper’’ test of humanity as an advance team of islanders go from village to village in nearby Bougainville hoping to buy land and settle. The film opens up gnawing questions of belonging, identity, and planetary consequence.

The drama in “The Warriors of Qiugang’’ lies in watching illiterate Chinese villagers find the strength of voice to fight against the chemical plants that are poisoning their lives. Filmmaker Ruby Yang spent three years documenting the growth of a committed environmental movement, and her cameras capture farmer Zhang Gongli as he becomes a shy but insistent leader in a culture wary of leading. “You are not an ordinary villager anymore,’’ Zhang is told after successfully pressuring the factories to relocate, and you can see the pride and panic on his face.

The two shorts in Program B are only marginally less compelling. Newton native Sara Nesson’s “Poster Girl’’ puts us right there with ex-Army gunner Robynn Murray as she flounders in agonies of post-traumatic stress disorder after her tours in Iraq. It’s a close-up portrait that could use a slightly wider frame of reference. “Strangers No More’’ is a slickly shot year in the life of a Tel Aviv public school that accepts refugees of all faiths from around the world; the committed hard work of both students and teachers is offset by a glib optimism on the part of filmmakers Karen Goodman and Kirk Simon that feels disingenuous at times (and, really, it would have been nice to meet at least one of the school’s Arab Israeli kids). Still, of the five movies, it’s the one least convinced we’re going to hell in a handbasket, and it shows us not in words but inspiring, sleeves-rolled-up deeds.