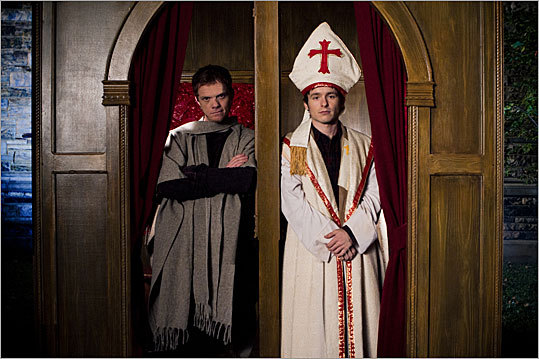 Because it’s primarily about doubt, “Blue Like Jazz” is an interesting anomaly in the faith-based genre of Christian movies. Instead of pounding the pulpit, the movie follows its young, idealistic hero as he pounds books, beers, and secular humanism at Reed College in Portland, Ore. The outcome rarely seems out of God’s hands, and the filmmaking is low-budget-earnest to the point of drabness — it’s not a movie to make converts. But it does give believers and those tottering on the edge something to chew on, and it steadfastly refuses to demonize everybody else.

The film is based on Donald Miller’s best-selling memoirs, in which the author confronted his own youthful crisis of faith. The son of an evangelical mother (Jenny Littleton) and an atheist, Coltrane-loving father (Eric Lange), Don (Marshall Allman) is pushed away from his Texas church by the revelation that mom’s sleeping with the local youth pastor. Holy hypocrisy! Don takes dad’s offer of a scholarship at Reed and heads north to hang with the heretics.

They’re a lively bunch, if awfully overdrawn — is there at least one student at Reed who isn’t a lesbian Marxist anti-corporate activist raver majoring in advanced Derrida? “Blue Like Jazz” doesn’t condemn the students but instead watches with curiosity as Don tries to become them, burying his true self beneath what he thinks is a trendy shell of cynicism. What he fails to notice is that they all care, deeply, about one thing or another, and especially about each other. Even the prankster dressed as the pope (Justin Welborn) is passionate about his anti-clerical stunts.

The script makes sure to give that character a tormented reason for his worldview, though; he can’t have come by his unbelief honestly. “Blue Like Jazz” takes a well-written book and turns it into an overwritten movie, with a cast of game young unknowns trying hard to make their roles more than signposts on the way to redemption. Will McKinney is especially touching as Don’s hometown friend, a party dude who comes to the church via the back door.

But Claire Holt, as the dewy blonde protester/love interest who hides a secret (shhh, she’s a Christian) never musters the energy to make her role more than a contrivance. And as the conflicted hero, Allman just doesn’t have the charisma necessary to make us care for his plight. The character seems like such a twerp that you wonder why his friends put up with him.

The point, of course, is many people go through a twerpish time before discovering who they are — or, in this movie’s case, who He is. “Blue Like Jazz” is engagingly busy on the surface and facile underneath, though, and it never conveys a genuine sense of yearning, spiritual or otherwise. There’s plenty of Ecstasy here, but not nearly enough agony.

Written by: Steve Taylor, Ben Pearson, and Donald Miller, based on

the book by Miller