The Ballad of Genesis and Lady Jaye

A film as unconventional as its subjects 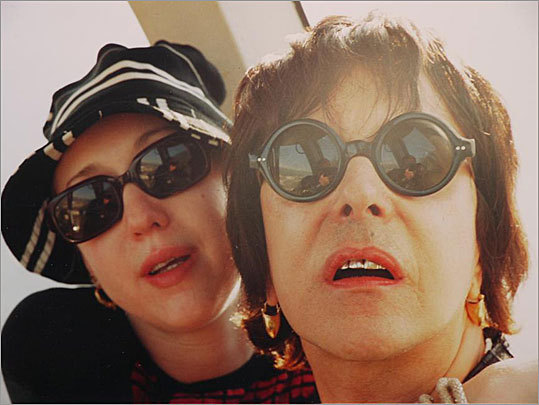 There are the gender explorations of Eddie Izzard, Barry Humphries, Martin Lawrence, and Tyler Perry. Then there’s Neil Megson, whose ideas of gender go far beyond garden-variety drag. He’s in his 60s now, and in the early 1970s, Megson began practicing performance art under the nom d’avant garde Genesis P-Orridge. His art collective, COUM Transmissions, took off and he founded the proto-industrial band Throbbing Gristle, then another outfit called Psychic TV.

But I imagine he’d say his masterpiece was the project he started with his younger, late second wife, Jacqueline Breyer, who played in a revamped Psychic TV and took the name Lady Jaye P-Orridge. Together, they pursued corporeal sameness by surgically altering their very different appearances until they appeared to be radically less different. Their goal was the creation of a new, third gender - the pandrogyne, which, according to the narration Megson provides for Marie Losier’s documentary, “The Ballad of Genesis and Lady Jaye,’’ is a “cry for survival,’’ a damnation of our tired old two-gender system. The body, Breyer has said, is a flesh suitcase.

The truth is they didn’t look that much alike (Genesis is round, Lady Jaye longer and leaner), but the movie argues that resemblance wasn’t the only point: This, too, was love, sublimated, made subversive, and biblical (from Genesis 2:24: “Shall a man leave his father and his mother, and shall cleave unto his wife: and they shall be one flesh’’). But the movie doesn’t exactly argue anything. It’s mostly a collection of scenes and footage, directed by Losier in plumes of abstraction and unified by Megson’s voice-over.

Losier spent seven years with her camera on Genesis and Lady Jaye. Intimacy dominates the resulting film, her first at feature length. Losier works as a film curator at the Alliance Française in New York, is steeped in the world of galleries and museums, and has made small, felicitous movies either with or about such iconoclasts as Guy Maddin and Richard Foreman. So it’s probably not an accident if the new film, in its 16mm observations (Genesis standing at a stove in what might otherwise serve as nightclub attire; Genesis in a leather skirt, matching top, and Hitler mustache), reminds you of Maddin or Kenneth Anger’s cinematic fantasias or Foreman’s theatrical mutations. Also not an accident, perhaps: any similarity to public-access television.

With its jump cuts and random, shabby beauty, Losier’s art wants to honor the P-Orridges’. Often, her movie is fighting to be as unconventional as its subjects. Sometimes it’s willfully pedestrian: shots of the couple tooling around the East Village together, hanging out, that sort of thing. Genesis says, languidly, that when he dresses up to do housework, he pretends that he’s cooking and cleaning in front of a fetish audience, which makes it all the sexier. There’s some hide-and-seek among their basement art archive, which produces a montage of his record collection and cassette tapes. There are clips of Throbbing Gristle onstage in San Francisco and of Megson urinating into a bottle in 1967. One of his young daughters is shown banging a gong and being prompted to recite the lyrics to “Are You Experienced?’’

Later, Losier goes backstage at a P-Orridge concert he mounted with Peaches and Gibby Haynes of Butthole Surfers and Nick Zinner of the Yeah Yeah Yeahs doing some of Genesis’s favorite music from the 1960s. There are also shots of him playing electric violin and sitting behind a drum kit on the street and a reenactment of one seminal childhood moment. The movie concludes with Genesis remembering the erogenous upside of Lady Jaye’s demise (she died of cancer in 2007). This is a manic, overmedicated, and remembered elegy. It’s also private, personal, and obscure, a ballad meant more for its subjects’ eyes and ears than ours.

THE BALLAD OF GENESIS AND LADY JAYE Directed by: Marie Losier

Unrated (language, urination, and pursuit of a third gender)