‘Battle Royale’ hasn’t lost any of its impact 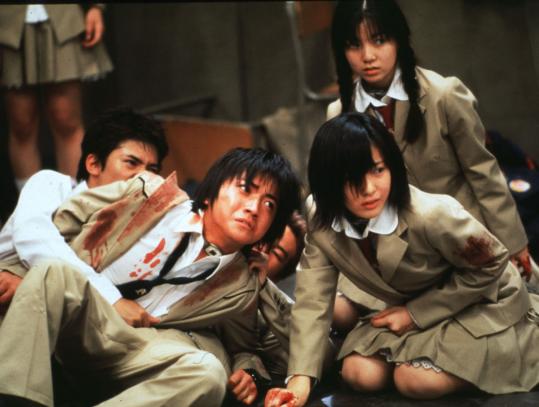 “Battle Royale’’ debuted 12 years ago and became a classic in Japan and a cult classic just about everywhere else. It presented Japan slumped in an economic and social dystopia at the turn of the millennium, and the country’s kids surprisingly ready to murder.

Forty-two high-school kids are shipped to an island and given three days to kill each other as part of a government-sanctioned massacre. Only one can win. It’s a surreal movie: a farce of state-control and adolescence that never apologizes for its high energy, cynical smirk, and mandatory underage body count.

The Brattle Theatre is showing the film this weekend (in March, it justly becomes one of the theater’s midnight movies). Seeing it all these years later is nerve-racking. The thing you worry about is that our tolerance for certain types of violence, even when conducted in the name of satire, is even stronger. You worry that we’ve caught up to the mayhem, that the shooting and stabbing no longer hurt, that all the tasering doesn’t really shock you anymore. It’s a relief to report that it still does.

The dread that hangs over “Battle Royale’’ hasn’t dissipated. It’s still a great time at the movies without the movie being exactly great itself. The characters are essentially teenage cartoons, and while you never doubt that director Kinji Fukasaku is serious (he means almost every death), it’s a horror-comedy whose ideas about totalitarianism resonate more vividly in the much creepier novel, by Koushun Takami, that Fukasaku adapted with his son Kenta.

Still, Fukasaku, who died in 2003, was always at his best when he was blunt, and “Battle Royale’’ has a poetic bluntness. After every cluster of murders, the name and game number of each dead student pops on screen followed by a helpful reminder of who’s left (“31 to go,’’ and so on). The real disturbance is how easy the killing appears to be. The collection of feral, hyper-ventilating performances - there’s never been a bigger, more game-for-everything cast of little martyrs than this one - actually insulates against outrage. Every dead body appears to have been in on Fukasaku’s sick joke. In part, the gag is that even with the guarantee of death, we’re still prisoners of our hormones and jealousies. If the movie is aiming for social tragedy, you have to squint to feel it.

Japan has its own pop-cultural history of kids in rebellion and the authorities who fear and oppress them. Yet, it’s possible to see this film as communing with, say, Nagisa Oshima’s “Cruel Story of Youth,’’ from 1960, “Heathers,’’ and any version of “Lord of the Flies.’’ Quentin Tarantino saw Chiaki Kuriyama in “Battle Royale’’ and gave her a mace to swing at Uma Thurman in the first installment of “Kill Bill.’’ Tarantino supervised a lot of killing in those two movies, but it was guided by a movie love that mostly liberated him from moral concerns.

The real heir to “Battle Royale’’ might actually be “The Hunger Games,’’ the first part of Suzanne Collins’s best-selling young-adult trilogy that opens next month and features 24 kids picked to kill one another as part of a reality television series. (Fans of Takami’s novel swear Collins stole her book from his. She says she’d never heard of it.) In any case, the MPAA has yet to offer a rating for “Hunger Games.’’ The book’s severed limbs and arrows to the throat might not please the ratings board, but they’re grisly social commentary that would make Fukasaku’s day.