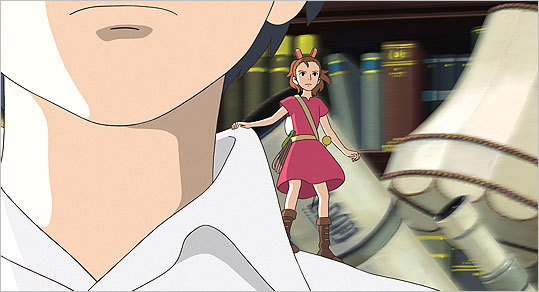 "The Secret World of Arrietty’’ offers a curious and mostly congenial case of cinematic fusion cuisine. Based on Mary Norton’s 1952 children’s classic “The Borrowers’’ - already the foundation for several TV series and a 1997 live-action movie - it has been taken up by Japan’s Studio Ghibli, with a screenplay by the legendary animation god Hayao Miyazaki. Since he didn’t direct (former Ghibli key animator Hiromasa Yonebayashi did), the movie is lesser Miyazaki, but not by terribly much.

Three inches tall, the title character (voiced by Bridgit Mendler of the Disney Channel sitcom “Good Luck Charlie’’) lives beneath a house in the countryside with her fretful mother and terse father (comedians and real-life husband and wife Amy Poehler and Will Arnett). At night they sneak out to scavenge household items and steer clear of cats and crows. The arrival of a sickly, young, normal-size human named Shawn (David Henrie) gives Arrietty her first real friend, but any sighting by a “Bean’’ means the little folk have to move on. But move to where? There may not be any other of their kind left.

Complicating matters is a nosy housekeeper (voiced by Carol Burnett) who hopes to capture a Borrower and who’s the source of some noisy slapstick in the second half of the movie. Until then, “The Secret World of Arrietty’’ plays out with a mixture of wonderment and hush. Seen from the Borrowers’ point of view, the human world is a fantastic, perilous landscape, where pins become swords and crossing a nighttime kitchen involves serious parkour skills. (Some smaller audience members may relate.)

The environment outside the house is no less daunting, with its wide, impossibly green fields of grass, scary/cute insects, and those Miyazaki clouds that float serenely above everything. A gentle surrealism washes through the film, along with a sense of melancholy that positions it between the fairy-tale beauty of “My Neighbor Totoro’’ and the whimsy of “Kiki’s Delivery Service’’ (and well short of the sometimes frightening intensity of “Spirited Away’’). Loss is just beyond the horizon here, with Shawn fearing his upcoming heart operation and Arrietty facing the extinction of her people.

Sounds like Ingmar Bergman for kiddies, but it’s hardly that, since the Ghibli wizards instinctively know how to balance darkness and light and there are laughs here. At the technical level, “The Secret World of Arrietty’’ isn’t as ambitious as the studio’s finest work, and the animation is stronger on texture than detail. But the film flatters young moviegoers’ awareness of deeper matters while delivering just enough enchantment to beguile both them and their parents.

The US English-language dubbing job (written by Karey Kirkpatrick and directed by Gary Rydstrom) is a cut above, too, although purists will hold out for a subtitled original and some of us are curious about a British-produced dub that casts “Atonement’’ star Saoirse Ronan as Arrietty. Still, no matter the language and even in less masterful hands, Miyazaki’s art aches loud and clear.

THE SECRET WORLD OF ARRIETTY

Written by: Hayao Miyazaki, Keiko Niwa, Karey Kirkpatrick, based on “The Borrowers””

Starring: the voices of

of dying and mortality)