Fallout shelter drama ‘Divide’ is a bomb in its own right 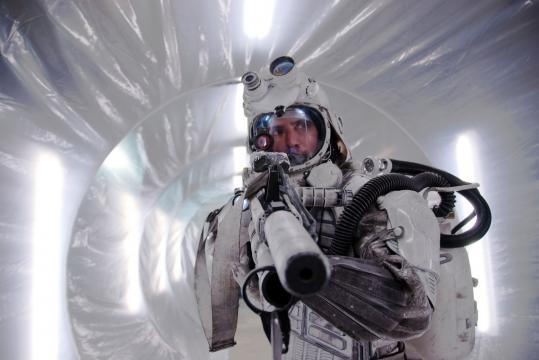 In “The Divide,’’ a handful of strangers flee into a fallout shelter after a nuclear attack. They all live in the same New York high-rise. Their host is the building super (Michael Biehn), who’s taken it upon himself to turn his basement dwelling into a bunker. Eventually, the sitting and wondering about exposure to radiation starts to make the men do increasingly crazy things such as turn one of the women into their sex slave. It’s doom that we’re meant to feel here. And repulsion. I hate to say, but I shrugged.

The director Xavier Gens knows how to draw a bloodbath. He did as much with his previous films - the Hollywood shoot-em-up “Hitman’’ and a grisly but not stupid French cannibalism slog called “Frontier(s).’’ The tub here doesn’t overflow. That should be a mercy, but you can sense that Gens, a Frenchman, is stuck with a script - by Karl Mueller and Eron Sheean - that simply won’t let him take the beatings and assaults and ax-wielding as far over the top as he might like to go. What you’re left with is a movie increasingly occupied by bad boys - played by Milo Ventimiglia and Ashton Holmes - and the gradual heroine (Lauren German), a pretty woman not-so-innocently named Eva.

Most of “The Divide’’ saddens and bores since it often seems rigged only for shock. The provocations, ideas, and scenarios all belong to other movies - “Alien’’ and “Fight Club’’ and “Straw Dogs,’’ for starters - and existential theater. And after two films, I’m comfortable asserting that Gens is a director interested in the dramatic and intellectual possibilities of subtext. He’s capable of being smart and appalling. I would not point to this new movie as a productive example of those interests.

But some of the people eating the super’s canned beans are played by good actors - Courtney B. Vance and Rosanna Arquette. Arquette is the most interesting thing here - “thing’’ because that’s the tiresome manner in which the movie treats her. She’s a howling, moaning, bleary mess. But, as ever, she’s a director’s actor. When required to spend a film in duct tape and on all-fours, all she seems to say is “yes.’’