An illuminating look at the subject of light pollution 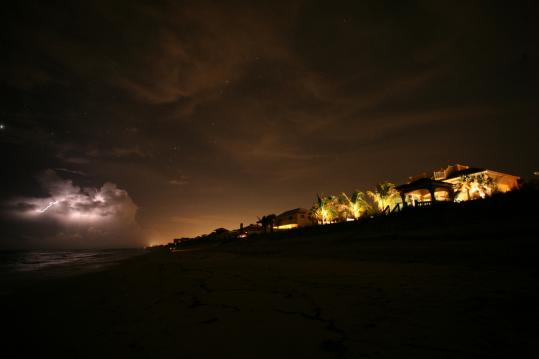 Growing up in rural Maine, Ian Cheney made his own telescope, attended astronomy camp, invented imaginary constellations. The nighttime sky excited his imagination as a baseball diamond or circus ring might have excited another boy. It was a field of dreams.

Cheney now lives in Brooklyn, N.Y., where the nighttime sky is rather less accessible. As a Staten Island-based astronomer tells him in “The City Dark,’’ he’s been able to see the Milky Way only twice - both times during blackouts.

“To live in New York these days,’’ Cheney tells us, “is to live under a kind of illuminated tent, a dome of light.’’ That’s true of a lot more places than New York. It’s been estimated that two-thirds of all humans live under light-polluted nighttime skies.

“The City Dark’’ examines how light pollution harms our souls much as air and water pollution harm our bodies. The effects of light, or its absence, can harm our bodies, too. Cheney takes time to look at how the incidence of breast cancer has been shown to rise for night workers or how artificial light can diminish melatonin levels. He also notes the harmful effects of massive man-made light on migrating birds and hatching sea turtles.

The documentary is at its best when focused on the nighttime sky. “What do we lose when we lose the night?’’ Cheney wonders. It’s a haunting question. He doesn’t try to answer it head on (how could he?). Instead, he peers at it from unexpected angles.

Cheney takes light readings in Central Park. He interviews a Manhattan scout troop (their camping trips let them see a lot more stars than they’re used to at home). He visits a New Jersey store that stocks 75,000 light bulbs. He goes to an observatory on Maui that sits above the clouds at an altitude of 14,000 feet; and to Sky Village, in Arizona, whose minimal nocturnal light draws astrophotographers.

“The Milky Way when it rises here looks like a thunderstorm coming toward you,’’ one of the Sky Villagers says. “You think, oh, my God, it’s going to cloud over, and it’s not. It’s the Milky Way rising, the edge of our galaxy coming up.’’ Cheney lets us see what he means.

Cheney mourns the effects of light pollution, but “The City Dark’’ is no diatribe. He acknowledges our species’ passion for light - and distrust of darkness. He also admits mankind’s unintentional mimicking of the stars above, and how beautiful “constellations of cities glowing below’’ can look when seen from an airplane - “like someone has taken the night sky and flipped it upside down.’’

Wonder, open-mindedness, and curiosity are the best things about “The City Dark’’ (the title’s very good, too). The documentary tries to take on too much, but Cheney’s enthusiasm for the subject makes that understandable. That same enthusiasm presumably accounts for the cutesy animations and over-reliance on time-lapse photography.

The most memorable statement in the movie comes from Chris Impey, a University of Arizona cosmologist. “Once you’ve known what a truly dark sky is,’’ he says, “it’s like you’ve smoked the very best kind of weed or had the very best single malt whiskey. You know, you can’t really go back.’’ “The City Dark’’ gives us a real whiff of why he feels that way.

Written and directed by: Ian Cheney

At: Museum of Fine Arts, today through Sunday