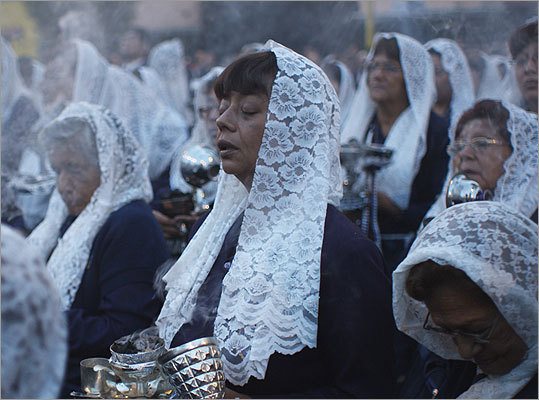 ‘Octubre’’ is a quick, quiet movie that distills Lima, Peru, to a downtrodden version of its more dynamic current self. Its guiding image is Christ’s crucifixion in the famous “Lord of Miracles’’ painting.

The film itself is set during the annual three-day pageant that brings hundreds of thousands of people to Lima toward the end of October. You can see in the crush of the crowd, the communal singing, the parading float - in all that piously serene energy - how Daniel and Diego Vega might have been inspired to make a movie, their first. They’ve also watched the films of Carlos Reygadas, the Mexican whose grimmer, greater, more intentionally disruptive work - “Japón’’ (2002), “Battle in Heaven’’ (2005) - is an obvious touchstone.

“Octubre’’ proceeds along similar emotional lowlands. It employs almost as much deliberately static framing and as many squatly built amateur actors as Reygadas does. The Vegas just take a less fraught, less violent road to what passes for grace.

Their most expressive character is the wailing infant someone leaves in the house of a humorless pawnbroker named Clemente (Bruno Odar). The mother might be a prostitute he used to see who has vanished. Where some might see a miracle, he sees a nuisance and hires Sofia (Gabriela Velasquez), a “Lord of Miracles’’ worshipper, to be the baby’s nanny. Clemente is pitiless with his indigent clients. With the prostitute he’s seeing at the moment (Maria Carbajal), he’s a shell. The baby does nothing for him. She’s delivered in a biblical basket that he swings to calm her cries. Another character, ancient Don Fico (Carlos Gassols), a friend of Clemente and Sofia, has been saving up with Clemente so he can remove his seemingly comatose girlfriend from a hospital and leave Lima forever.

The Vegas work without conventional sentiment. They use only natural sound and slightly less natural emotion. Odar and Gassols are well known in Peru. Still, they and the rest of the cast seem to be exactly who they are. And unlike Reygadas, the Vegas don’t give you the sense that getting characters to submit to emotional monochromatics is a turn-on. Velasquez, for one thing, emits a campfire’s warmth.

The brothers also have a sense of visual humor. Clemente and his clients sit at opposite sides of a table in his small, dingy apartment. When they stand, the framing renders them headless.

Most of the transactions here are monetary. The purest - there’s really only one - is hard to miss and feels like something from the Bible. At the risk of overstating the influence of Reygadas on this film, it’s worth noting that he turned a corner a few years ago with a transcendent love story called “Silent Light,’’ and around that corner was incandescent spiritualism. The Vegas are much less melodramatic believers. Without any great cinematic fanfare, they’ve come up with characters who know there’s a God, and that he’s good.

Written and directed by: Daniel and Diego Vega