Making her own magic

Anne Hathaway approached 'One Day' as she approaches every day: in command 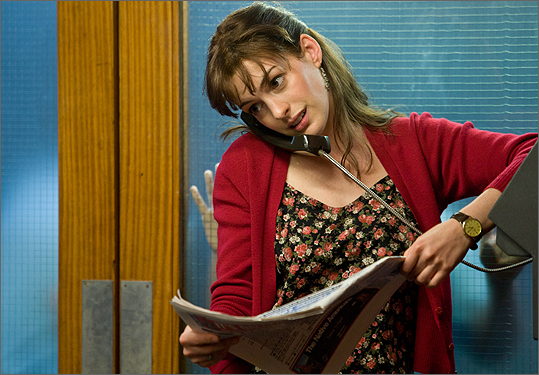 Midway through a sentence, she abruptly pauses and lunges toward the coffee table in front of her. Without explanation, she picks up a magazine from the middle of a pile and slams it, face down, on the other side of the table.

Sure enough, a June edition of Harper’s Bazaar, featuring Hathaway on the cover, has been placed in her Waldorf Astoria suite. The magazine shows her posing with outstretched arms and wearing a ruffled red top that reveals deep cleavage. Though she doesn’t usually mind seeing her image in print, she says it’s difficult to focus on the business at hand while staring back at her own face (and armpit).

When the offending periodical is properly banished, Hathaway flashes her trademark smile and rolls her eyes. At last, she regains her train of thought and continues to explain why she was eager to win the role of Emma in “One Day,’’ which is directed by Lone Scherfig (“An Education’’) and opens Friday.

The film, which also stars Jim Sturgess, follows the story of Emma and Dexter, who spend the day after their college graduation - July 15th - together. Over the next two decades, they meet on many July 15ths, sharing intimacy, friendship, and heartbreak as they struggle to learn the meaning of love.

“I loved the idea of getting to explore a relationship that blossoms over real time,’’ says Hathaway, whose career got a jumpstart at age 19 when she starred in “The Princess Diaries’’ (2001) and its sequel (2004). “Because movies - particularly some of the movies I’ve made - make it seem like you can find your soul mate and get everything worked out in 6.4 days. I like the idea that these people had to work a few things out for themselves before they could find love.

“It’s not surprising I’m drawn to stories about later bloomers,’’ she adds. “I think women get more confident as they get older and become happier.’’

That’s what drew her to the character of Emma, an English girl from a working-class background, whose initial vulnerability gives way to her underlying strength. It’s also why the actress says her performance in “Rachel Getting Married’’ (2008) is her favorite. In that film, directed by Jonathan Demme, she plays Kym, a drug addicted young woman who returns home for a family wedding and embarks on a rocky journey toward healing and forgiveness.

From the moment Hathaway read the “One Day’’ script by David Nicholls, who also wrote the same-titled 2009 novel from which the film was adapted, she was intent on winning the part. But she knew it would be a challenge because Scherfig was planning to cast British actors as the leads.

“I was sent the script with a note that said, ‘Don’t fall in love, she might not be meeting with American girls.’ ’’ Hathaway says. “So that made it all the more titillating.’’

Scherfig concedes that she did not plan for an American to play Emma, but was willing to reconsider when she learned Hathaway wanted to get involved. The actress is not a classic beauty. But her face, with its expansive mouth and wide-set eyes, is a wildly expressive tool for a filmmaker.

“It’s a very strong part of her talent to have a face that is so readable,’’ says the no-nonsense Danish director. “I prefer working with experienced actors, rather than amateurs or people who are chosen for their looks, which is very common.’’

But Hathaway’s non-British stature did pose some obstacles for the 28-year-old Brooklyn-born, New Jersey-bred actress, despite having played an Englishwoman in 2007’s “Becoming Jane.’’ “Sooo challenging,’’ Hathaway says, with another roll of her large brown eyes. “And I felt like there was a lot of pressure to get it right because it would be distracting if I didn’t.’’

She was particularly worried about shortchanging fans of the best-selling novel, which has been translated into 37 languages and has developed a cult following.

“I felt an allegiance with, and a debt to, the book’s many, many, many, many fans. I didn’t want to let them down with Emma,’’ she says. “I definitely felt the pressure. But I had a lot of support from a dialect coach; a strong, fearless director; and a beautiful costar.’’

By all accounts, Hathaway approaches her career with an unwavering sense of professionalism and an unimpeachable work ethic. Yet, despite her drive, or perhaps because of it, she seems to approach life with a lighthearted lilt and an ironic sense of humor.

Taking things too seriously is pointless, Hathaway explains, sitting back on a couch, wearing a short, three-colored ’60s-style dress. Instead, she approaches things out of interest and to gain experience. It was this attitude, she says, that led her to host the Academy Awards this year with James Franco. And despite the fact that their performance was widely panned by critics - Franco’s in particular - Hathaway says she has no regrets.

“I thought it was an absolute delight. I had a whale of a good time,’’ she says.

So would she do it again, if asked?

“No!’’ she says, lapsing into long, hearty laugh. “No, I wouldn’t. Curiosity led me to it and my curiosity has been sated.’’

While she confesses that she would have preferred a better critical response to her hosting debut, the lack of media love did not really trouble her because she has kept perspective.

“It’s never fun to put yourself out there and have it be received in a way that’s less than positive. But, although I didn’t plan it, my life conspired to keep me grounded - within a few days of hosting the Oscars, I was in the slums of Nairobi. It’s pretty hard to feel bad about getting bad reviews when you’re talking to 14-year-old girls who have two children each.’’

Another thing that keeps Hathaway grounded these days is her boyfriend of three years, Adam Schulman. She met Schulman shortly after her longtime boyfriend, Raffaello Follieri, was arrested on charges of financial crimes (he later pled guilty). When that relationship fell apart, Hathaway says she was planning to take a break from love.

“It’s a healthy thing to hit your reset button every now and then. But I fell in love with a boy,’’ she says tilting her head in mock-shyness. “I fell in love with a keeper, so I kept him. He was smart enough to know I still had a lot of demons to battle and gave me my own time and space.’’

Despite being in a loving, stable relationship, Hathaway says she’s in no hurry to move on to the next phase of her life. Although she always imagined she’d start a family before she turned 30, Hathaway, who will be 29 in November, says she doesn’t see it happening.

“I thought I’d have kids by now and I’m not ready,’’ she says. “I thought I’d be ready. I thought being a younger mother was really important to me. But now I feel like I have plenty of time.’’

A few other before-30 goals have not been hit, including a dazzling Broadway career.

This is New York, she is reminded. Arrogance is currency.

Reassured, she confesses. “I thought I would have been nominated for a Tony [Award] by now,’’ she finally spits out. “That was one of my dreams and it’s probably not going to happen before I’m 30.’’

She did receive positive reviews for her portrayal of Viola in a Shakespeare in the Park production of “Twelfth Night’’ two years ago. But for now she contents herself with screen projects. She will play Catwoman in “The Dark Knight Rises,’’ the third installment of director Christopher Nolan’s Batman series, which is scheduled for release next year. In addition, she is slated to play Judy Garland in a biopic about the “Wizard of Oz’’ star. Though the project is still in development, Hathaway says it’s “inching closer to being a real film.’’

These days, she’s enjoying her success and sharing its perks with people she loves, including her parents and two brothers. They’re big boosters of her career. But she admits they’re less enthusiastic about her decision to appear in nude scenes, including her starring role in last year’s “Love & Other Drugs’’ with Jake Gyllenhaal.

“They’ve always been enormously respectful of what I do for a living,’’ she says. “While letting me know they prefer me to keep my behind covered in films, they’ve never made me feel ashamed.’’