THIS STORY HAS BEEN FORMATTED FOR EASY PRINTING
Scene Here 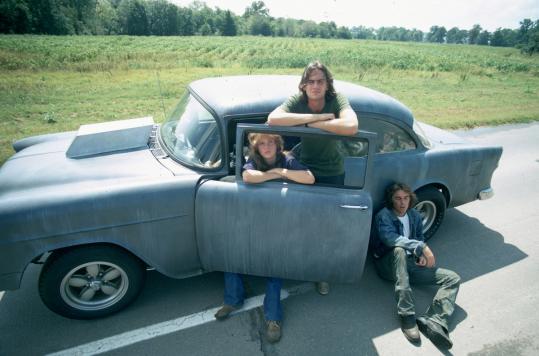 Director Monte Hellman (below) will have several of his movies screened at the HFA, including 1971’s “Two-Lane Blacktop’’ (above) starring Laurie Bird, James Taylor, and Dennis Wilson. (Michal Cizek/AFP/Getty Images (Below))
By Loren King Globe Correspondent / July 31, 2011

Filmmaker Monte Hellman - best known for 1971’s “Two-Lane Blacktop’’ and regarded as an influential maverick during the post-studio era in American cinema - will visit the Harvard Film Archive next Saturday and Sunday for the HFA’s retrospective “All Roads Lead to Nowhere: The Films of Monte Hellman,’’ running from Aug. 5-15.

“Two-Lane Blacktop’’ kicks off the series Friday at 7 p.m. Starring singer James Taylor and Warren Oates, one of Hellman’s favorite actors, “Two-Lane Blacktop’’ is considered by many to be one of the great American films in the last gasp of ’60s counterculture. It’s followed at 9 p.m. by Hellman’s dark and brooding 1965 existential western, “Ride in the Whirlwind,’’ starring Millie Perkins and Jack Nicholson, another of Hellman’s frequent leading men. Two years later, Hellman reunited Nicholson and Perkins with Oates for “The Shooting’’ (next Sunday, at 7 p.m.), a grim western that’s considered one of Hellman’s masterpieces. The director will engage in a question-and-answer session after this screening.

Hellman may be regarded as an underappreciated auteur, but his career is far from over. The HFA describes his 2010 film “Road to Nowhere’’ (Saturday, at 7 p.m.) as a “moody neo-noir that revolves simultaneously around an unsolved murder mystery and a daring film-within-a-film mirror game.’’ Hellman also will be on hand to discuss the film after the screening. “China 9, Liberty 37’’ (a week from Monday, at 7 p.m.), Hellman’s final western, from 1978, was also his last film with Oates. It’s among his most personal works and includes a memorable cameo by Hellman’s longtime hero, Sam Peckinpah.

Notions of masculinity figure in many Hellman films, none more obviously or tragically than 1974’s “Cockfighter,’’ with Oates as a man who has staked his reputation on regaining the title of champion cockfighter. Costarring Harry Dean Stanton and shot by the great Almendros, the film, according to the HFA, “offers a richly authentic vision of the South and of cockfighting subculture that compares to the far West world of street racing captured so memorably in ‘Two-Lane Blacktop.’ ’’

Vineyard viewing Director Joshua Atesh Litle’s lively documentary “The Furious Force of Rhymes’’ explores how hip-hop has become a form of universal protest around the world. From African-Americans to East German skinheads, Israeli Jews to Palestinian Arabs to West African feminists, subcultures use this common musical language to confront diverse (and sometimes clashing) social issues. Litle presented his film at two screenings yesterday at the Roxbury International Film Festival, but audiences who missed it can catch it a week from Saturday at the 9th annual Martha’s Vineyard African American Film Festival, with Litle in attendance. The MVAAFF, launched by New York-based film production company Run and Shoot Filmworks to garner exposure for filmmakers of color, runs Aug. 9-13. It’s not the only film festival on the Vineyard. The Martha’s Vineyard International Film Festival runs Sept. 8-11. Meanwhile the busy Martha’s Vineyard Film Society is the island’s only year-round venue for independent films. Its next screening is the documentary “Cape Spin,’’ on Tuesday, with director Robbie Gemmel present. “Cape Spin’’ examines the battle over the country’s first offshore wind farm, proposed for Nantucket Sound. Screening is at 8 p.m. at Union Chapel, in Oak Bluffs.

Go to www.mvfilmsociety.com for more information.

Preserve and protect The Brattle Theatre hosts a return engagement of Boston native Paul Mariano’s documentary “These Amazing Shadows.’’ It runs Friday through next Sunday. A film buff’s delight, the documentary unspools hundreds of film clips as it chronicles the creation in 1989 of the Library of Congress’s National Film Registry and ongoing efforts to protect the country’s film history. Talking heads in the film include Jay Carr, former Boston Globe film critic; Robin Blaetz, professor of film studies at Mount Holyoke College; and George Willeman, nitrate film vault manager at the Library of Congress. Willeman is credited with discovering the uncensored version of the 1933 pre-Code classic “Baby Face,’’ starring Barbara Stanwyck. The Brattle will screen the uncut, restored print of “Baby Face’’ next Sunday.

Go to www.brattlefilm.org for more information.

Under the stars “The Trotsky,’’ shown last year at the Boston Jewish Film Festival, returns for a free “under the stars’’ screening at sunset at the Liberty Hotel a week from Monday. Co-presented by the BJFF, it’s a comedy about odd high schooler Leon Bronstein, who claims to be the reincarnation of Soviet Red Army hero Leon Trotsky. The seated screening will begin about 8:15 p.m.; rain date is Aug. 15.