On watch at Woods Hole for 20 years 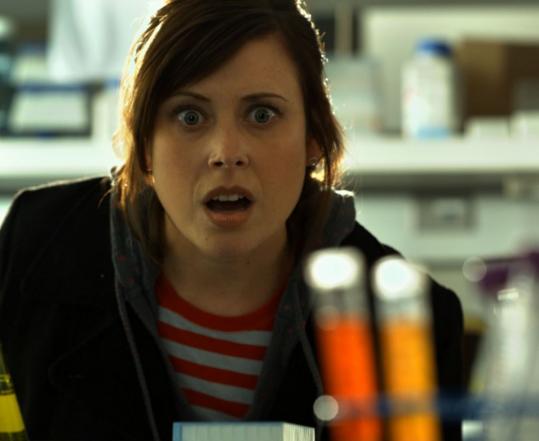 Maybe there will never be a day when Woods Hole is as synonymous with films and filmmaking as it is with oceans and oceanography. But for two decades now, the picturesque little town on Cape Cod has been staging a film event that prides itself on thinking big, and in creating a cinematic community whose connections are capable of producing a ripple effect.

“We’re a small festival, but we aim high,’’ says Woods Hole Film Festival founder Judy Laster. “You don’t have to be Sundance to have an impact.’’

As the WHFF celebrates its 20th anniversary year with a varied program that kicks off Saturday, Laster says the goal is the same as it ever was, only more so. “We want our community to have an experience that can’t be replicated someplace else. It’s our responsibility to maintain a high level of programming so that we help energize independent filmmakers. We want to empower them and allow them to be heard.’’

One of those filmmakers is Justin Lerner, whose feature debut, “Girlfriend’’ (screening Aug. 5), was shot entirely in Wayland. The film drew favorable notices at last year’s Toronto International Film Festival and is expected to see limited theatrical release this fall. In the meantime, it’s getting its Massachusetts premiere at an event that has some history of showcasing the Lerner family. In 2009, Justin Lerner’s father, Richard, a professor at Tufts University, joined actor-director Joe Pantoliano for a WHFF panel discussion about Pantoliano’s documentary on mental illness, “No Kidding, Me Too!’’ which prominently features the elder Lerner.

“My dad’s been at Woods Hole more than me,’’ Lerner says with a laugh. “My connection to the festival grew out of that.’’

This year, the young Lerner will have the spotlight all to himself, with his parents in attendance. “Girlfriend’’ is about Evan (South Shore resident Evan Sneider), a young man with Down syndrome who unexpectedly comes into a large amount of money. He decides to use his new wealth to pursue Candy (Shannon Woodward), a local girl he’s been in love with since high school. Lerner first worked with Sneider in 2007 on a short film, “The Replacement Child,’’ and wrote “Girlfriend’’ with him in mind. Sneider will attend the screening, along with other members of the cast and crew.

Running July 30 to Aug. 6, WHFF presents eight days of features, documentaries, shorts, panels, master classes, and a few parties, geared to both its loyal audience and to filmmakers. Nothing pleases Laster more than to see a young director debut a film at the festival and then return with another film years later. “It’s still difficult for independent filmmakers to get out there. The community we’re in embraces the festival and the films. We’re visible all over the world now because of filmmakers who’ve been at our festival,’’ she says.

Take Valerie Weiss, who met Laster in 2006 when her short “Transgressions’’ screened at WHFF. This year, Weiss is back with her debut feature, “Losing Control’’ (Aug. 4), a romantic comedy that, like her short film, combines Weiss’s “love of science and love of film.’’

“Losing Control’’ stars Miranda Kent (of the TV series “Campus Ladies’’) as a scientist in search of proof that her boyfriend is “the one.’’ Weiss, who now lives in Los Angeles, drew on her experiences while a student at Harvard Medical School where she received her doctorate in biochemistry in 2001. “I love the romantic comedy genre, but it’s usually formulaic with female characters who fall into caricature. I don’t relate to them,’’ says Weiss, who founded the Dudley Film Program at Harvard. Weiss shot “Losing Control’’ at Harvard and around Boston and Somerville. “It captures the Ivy League science world and the culture of Boston in an authentic way. Los Angeles is the opposite. In a club [in LA], for instance, it’s very sexual, with people wearing little clothing. In Boston, you’d find academics in suits,’’ she says.

Laster says master classes and panel talks are central to WHFF’s mission to educate filmmakers and provide opportunities to form connections. For the past five years, WHFF has offered a Filmmaker in Residence program. This year, that title belongs to Heidi Ewing, who will conduct a master class in documentary filmmaking on Aug. 1. Ewing and directing partner Rachel Grady were nominated for an Academy Award in 2007 for best documentary feature for “Jesus Camp,’’ a candid look at Pentecostal children in the United States. WHFF screens “Jesus Camp’’ on Aug. 1 and Ewing and Grady’s 2010 documentary, “12th & Delaware,’’ about the raging abortion battle in this country, on Aug. 2.

Gordon Quinn, who has produced and directed more than 30 documentaries including the seminal “Hoop Dreams’’ in 1994, will also host a master class on “Fair Use in Documentary Film,’’ teaching about material in the public domain (Aug. 6). His latest documentary, “A Good Man’’ (Aug. 5), follows renowned modern dance choreographer Bill T. Jones as he and his company create an original dance-theater piece in honor of Abraham Lincoln’s bicentennial.

Laster says she has little doubt about what keeps the 40 year-round volunteers, herself included, passionate about WHFF as it heads into its third decade. “It’s the electricity in the air. Yes, it’s about the films, but it’s also about the filmmakers and the audience,’’ she says. “The ones that come back every year make us want to be the best that we can be.’’