Judy Moody and the Not Bummer Summer

This ‘Judy’ is more bratty than moody 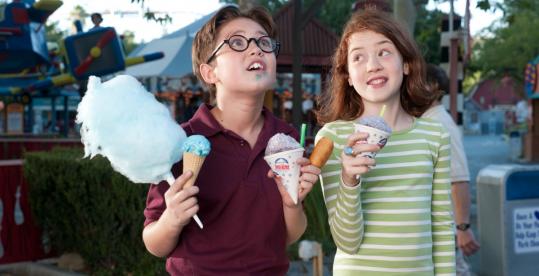 Some movies make you remember being a child. Some movies treat you like one. “Judy Moody and the Not Bummer Summer’’ does both. This is good news for the 8-year-olds who’ve read Megan McDonald’s books, which began to arrive in 2000. They might not mind the movie’s relentless determination to be both an arts-and-crafts project and dessert. The percussive shakers on the soundtrack evoke nothing less than an industrial-strength sifter dumping powdered sugar on everything. Song lyrics and choice bits of synonymous dialogue (“Poop!’’ “Scat!’’) attack the screen like gnats.

This tale appears to have been concocted independent of McDonald’s books but made to embody their spirit. (McDonald and Kathy Waugh are the screenwriters.) The result is funky — and not only because Judy (Jordana Beatty), a fourth-grader-to-be, has orange hair that might be dreadlocking on its own or because her blond, crew-cut, Bigfoot-obsessed brother’s name is Stink (Parris Mosteller) or because she and Stink almost eat a turd sandwich. What reeks is Judy’s way of the world. The only way she can enjoy her school vacation is by quantifying and commodifying fun. To keep track of her adventures and those of her friends, she whips up a chart that assigns point values to such tasks as freeze-dancing.

The chart’s urgency intensifies after Judy discovers that her pals will be farther flung than she’ll be and that her severely hippy-dippy Aunt Opal (Heather Graham) has arrived to watch her and Stink while mom and dad visit grandma. She and Stink may as well have been left alone. Judy is beyond discipline, shame, self-awareness, collaboration, or compromise. A new friend calls Judy sick, and Judy offers a clarification: “Sick awesome!’’ When her long-suffering best buddy, Frank (Preston Bailey), calls her a fun sponge, she calls him a fun mop. Anything that deviates from Judy’s wishes is a buzz kill and warrants a retaliatory tantrum. She’s the mutant version of Beverly Cleary’s Ramona.

John Schultz directed “Judy Moody,’’ and his instructions to Beatty, appear to have been: “No. Way brattier!’’ Luckily, despite her obnoxious energy, she has a twinkle of wonder, mostly when she gazes at Jaleel White, who plays Judy’s teacher. She looks TV-star-struck: “You. Were. Urkel.’’ But if you asked Judy who her favorite actress is, she’d probably say Miley Cyrus. Schultz’s advice for the other children is “OK, run and scream,’’ and by children I might also mean Graham. It’s nice to see her working with actors her own age.

Mosteller might be the movie’s real discovery. He twists his lisp and slurry speech around the dialogue in a way that exudes far less attitude than the kids. He’s spunky but hasn’t been corrupted by the slanguage the way his pre-tween costars have. There’s still something authentic and authentically manic about him. McDonald also wrote a bunch of books about Stink. At the risk of being careless about what I wish for, I’d rather watch a movie of those.

JUDY MOODY AND THE NOT BUMMER SUMMER