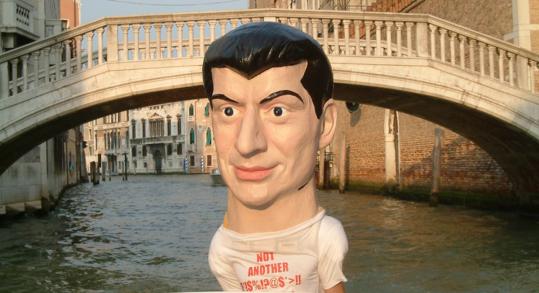 Conceived as a series of short films introducing individual contemporary artists to a wider public, Ben Lewis’s “Art Safari’’ is a hoot. It’s also one of the most intelligent treatments of contemporary art ever to hit the screen.

Lewis, its young presenter, is the source of its success. Fluent in at least three languages, he’s bright, curious, inquisitive. He’s also an odd — and entirely salutary — mix of enthusiasm and skepticism.

The skepticism is light, not heavy. It is directed at conceptualism — the theory-based mode of making and talking about art that prevails in the art world today — and at the mechanisms of the art market.

But rather than shy away from these regions and focus, for instance, on traditional portraiture or landscape painting, Lewis chooses artists who are deeply engaged in this terrain.

The Museum of Fine Arts has chosen to screen together three documentaries from the “Art Safari’’ series. The first, about the Italian jokester Maurizio Cattelan, is given life by Lewis’s genuine perplexity: Is Cattelan, who specializes in humiliating his dealers and making hyper-real sculptures of, for instance, Pope John Paul II struck down by a meteorite, a one-trick pony? Or is he a brilliant satirist?

When Lewis made the film, several years ago, Cattelan was still declining interviews (he has since eased up on this self-imposed rule). He often sent proxies in his stead.

Lewis gets in the spirit of things by sending his own proxy to take on Cattelan’s proxy: Thus we’re treated to the spectacle of an old woman folded up in a refrigerator interviewing a curator about the absent artist’s intentions. (Cattelan once installed a wax reproduction of this very woman — an English collector’s aging mother — in the fridge of the collector’s kitchen. Lewis tracked her down and somehow persuaded her to take part in his scheme.)

Lewis goes the extra mile. He will cross continents to be in the right location — a gallery, a collector’s home, a demilitarized zone — and his unassuming, mildly amused manner tends to win him the trust of his subjects.

The piece on Matthew Barney sees him trying, with touching sincerity, to fathom Barney’s involved and convoluted “Cremaster’’ works. All in all, he does a great job. He spends time with people who starred in and helped produce the “Cremaster’’ films. He scales the Chrysler Building and spirals up the Guggenheim Museum (both buildings feature heavily in the films). And he interviews Barney himself at length. The two visit a football stadium together, since Barney’s past as a football player figures hugely in his work. There’s a poignant moment at the end when Barney lapses into pensive silence, and it’s somehow the most eloquent part of the film.

Some documentaries about contemporary art try to hold up a neutral mirror to the artists they address, a sign of (often exaggerated) respect. Lewis’s more personal and skeptical approach works better — not only because his presence is so attractive, but because his subjects are themselves pushing at all kinds of boundaries. Lewis — without ever being a brat about it — is prepared to push back.