THIS STORY HAS BEEN FORMATTED FOR EASY PRINTING
Scene Here | Local films, festivals, and faces

Making a film about a man who makes peace 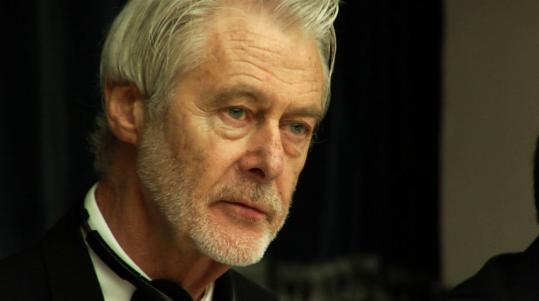 Padraig O’Malley is the subject of Jim Demo’s documentary “The Peacemaker.’’
By Loren King Globe Correspondent / May 22, 2011

Boston filmmaker Jim Demo is in Northern Ireland, continuing production on his documentary “The Peacemaker.’’ It’s about Dublin-born, Cambridge-based Padraig O’Malley, professor of international peace and reconciliation at the John W. McCormack Graduate School of Policy Studies at the University of Massachusetts Boston. Demo will film the second annual Forum for Cities in Transition conference in Derry/Londonderry this week with delegates from four continents and 12 divided cities. Launched by O’Malley, the inaugural conference was held at UMass Boston in April 2009.

Demo describes his documentary as a portrait of O’Malley’s life, work, and philosophy. He says the project began in an unlikely, though some might say perfect, spot: the Plough and Stars pub, in Cambridge, the local watering hole that O’Malley has owned since the 1970s. “I thought it was just a fish tale at the bar. But as I researched him, I discovered he was involved in high-level peace processes in Iraq, South Africa, Northern Ireland, and other war-torn regions,’’ says Demo, a former lawyer who formed Central Square Films in 2006. His first film was the 2009 comic short “First Time Long Time,’’ starring John Savage, Amanda Plummer, and Karen Black.

Demo and a crew began following O’Malley around Boston and to the areas of conflict where he tries to broker peace. It’s brought the filmmaker face to face with the risks that come with the job. “While we were filming last year in Mitrovica, Kosovo, a riot on a bridge erupted between former Albanian [Kosovo Liberation Army members] and Serb nationalists, as a reaction to parallel elections the Serbian government called,’’ Demo says. “NATO troops had to be called in and at one point there was AK-47 fire. There were no life-threatening injuries, but it really demonstrated well the atmosphere in which O’Malley does his work.’’

After the current visit to Northern Ireland, Demo expects two more trips abroad as he continues to raise money for “The Peacemaker.’’ “It’s difficult with this type of documentary, because there’s no strict schedule; we film on the fly and produce a lot of footage,’’ he says. “It’s a strong international story. I’m planning for a global release and a strong festival run.’’ Demo is a Long Island, N.Y., native who “fell in love with Boston’’ when he moved here, in 2000. Filmmaking was his dream for many years. In 2006, he says, “the technology was to the point where I could ease into the process. I bought a high-definition camera and editing system and read everything written about filmmaking. I taught myself and I’ve never looked back.’’

For more information on “The Peacemaker’’: www.kickstarter.com.

Brattle hosts Dallaire Another international human rights figure, Roméo Dallaire, the subject of two powerful documentaries, will discuss his new book, “They Fight Like Soldiers, They Die Like Children: The Global Quest to Eradicate the Use of Child Soldiers,’’ on Wednesday at 6 p.m. at the Brattle Theatre, in Cambridge. A retired Canadian general, Dallaire was the subject of Steven Silver’s “The Last Just Man,’’ featured in the 2002 Human Rights Watch International Film Festival, which played in Boston. Peter Raymont’s acclaimed “Shake Hands With the Devil: The Journey of Roméo Dallaire’’ (2004) documents Dallaire’s efforts in 1993 as head of the United Nations peacekeeping forces in Rwanda to take action shortly before 800,000 people were systematically killed in just 100 days. For more information: www.brattlefilm.org.

Malick’s worlds In anticipation of Terrence Malick’s new film, “The Tree of Life,’’ which famously divided audiences at its first screening in Cannes last week, ArtsEmerson continues its program “Terrence Malick’s Worlds’’ with a screening today at 7 p.m. of Malick’s fourth film, “The New World’’ (2005). Starring Colin Farrell, Q’orianka Kilcher, Christopher Plummer, and Christian Bale, the film revisits the legend of Pocahontas and John Smith as it explores the mythology of America’s colonization. Films are screened in the Bright Family Screening Room, at Emerson College’s Paramount Center. For more information: www.artsemerson.org.