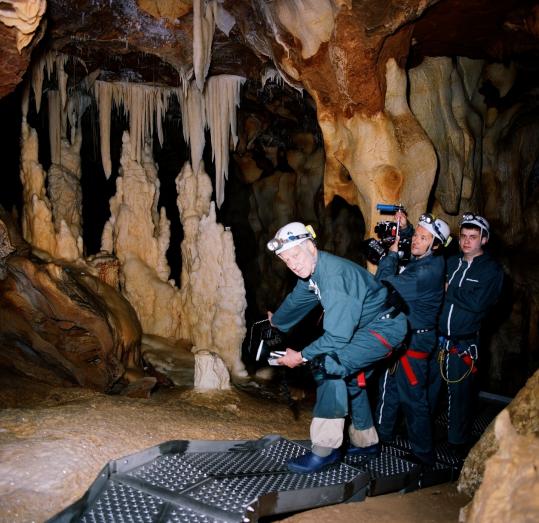 Werner Herzog (white hat) and his crew film in the Chauvet-Pont-d’Arc cave in southern France, site of the oldest Paleolithic cave paintings ever found. They were allowed to film for only six days, and for only four hours each day. (Marc Valesella/Sundance Selects)
By Christopher Wallenberg Globe Correspondent / May 6, 2011

NEW YORK — As a boy growing up in Germany, filmmaker Werner Herzog remembers spying a picture book of the famed Lascaux cave in southwestern France in the display window of a bookstore. On its cover was a cave painting of a horse. Herzog became mesmerized by the image just beyond his reach, daydreaming about what other ancient cave art lurked inside the pages of the book. To save the money to buy it, he worked as a ball boy at the local tennis courts and did other odd jobs, and every week he would pass by the store window to make sure no one had snatched it up.

Months later, Herzog had earned enough to purchase the book, and he will never forget the frisson of excitement when he first opened it up. “This moment of awe has never left me,’’ Herzog says, looking nostalgic. “It was the very first independent awakening of my own intellectual and spiritual quests. The book made such a deep impression on me that I immediately knew I was the one who had to make this film.’’

The film in question is Herzog’s new documentary, “Cave of Forgotten Dreams,’’ which opens in Boston today and provides a 3-D glimpse inside the remarkable Chauvet-Pont-d’Arc cave in southern France.

The long-hidden cavern, which had been sealed for nearly 20,000 years when a rock face collapsed in front of its entrance, contains hundreds of pristinely preserved paintings of horses, bison, cave bears, and other animals, some dating an estimated 32,000 years (there is debate among archeologists) to the time of the Neanderthals. That would make them the oldest Paleolithic cave paintings ever found — a remarkable 15,000 years older than the ones at Lascaux.

While the cave was discovered in 1994, few people outside a select group of scientists have been allowed access to it. Herzog and his crew, 3-D cameras in tow, were granted entry by the French Ministry of Culture, and when they first stepped inside it was another moment of awe-inspiring wonder, surpassing even the thrill he felt as a young reader flipping pages.

“Entering Chauvet was a step way, way beyond that,’’ says Herzog, in his German-accented English. “The most stunning thing about Chauvet is that it’s as if the painters had done it yesterday. It’s so fresh. And it’s not ‘primitive’ scribbled little sketches, like children who do it. It’s completely, absolutely accomplished art — never got better in any phase of human culture. And where does it come from? How does it burst on the scene? It’s totally mysterious and yet also understandably us. It’s a modern human soul.’’

The Chauvet cave paintings stand as some of the oldest known art in the world, a window into the lives of the earliest prehistoric humans. The ancient cave painters used the undulating limestone walls, giving a sense of movement to the images of galloping horses, roaring lions, and menacing bears, and the 3-D format underlines that dynamic quality to great effect. “It’s a wild drama of formations inside the cave. Never a flat area. It’s all bulges and niches and pendants of rock,’’ Herzog explains. He calls a series of charcoal horse paintings “proto-cinema’’ for the way they suggest motion.

Access to Chauvet cave has been severely restricted since its discovery, due in part to the irrevocable damage that thousands of visitors unwittingly inflicted on the Lascaux cave when it was opened to the public in the 1950s. Indeed, for only two small periods each year, a select group of paleontologists, archeologists, and other scientists are allowed into the cave, which is located near the famed Pont-d’Arc natural limestone arch along the Ardeche River. Herzog and his three-person crew were allowed to film in the cave for only six days, and for only four hours each day.

“It’s a perfect time capsule, which made it absolutely unique for science,’’ Herzog says. “You still have on the wall a charcoal painting of a horse, let’s say. But you can also see the powder of charcoal on the floor right under it, which hasn’t been touched for 32,000 years. And woe unto you if you sneeze and blow away the powder and the evidence of the artists.’’

Whether he’s traversing Antarctica (“Encounters at the End of the World’’), orchestrating the hauling of a massive steamship over a mountain in the rain forests of Peru (“Fitzcarraldo’’), or leading crazed conquistadors down the Amazon River (“Aguirre: The Wrath of God’’), Herzog has long been drawn to cinematic feats of extreme adventure or exploration, and at 68 he still has a seemingly insatiable curiosity about the world.

“He truly is a great explorer in the classical sense. I can imagine him as [Henry Morton] Stanley meeting [David] Livingstone, or discovering a lost world of dinosaurs, or climbing an Antarctic volcano, which of course he already did. And his grandfather Rudolph Herzog was an archeologist-explorer, so it’s in his genes,’’ says Erik Nelson, who also produced Herzog’s “Grizzly Man’’ and the Oscar-nominated “Encounters at the End of the World.’’

Herzog, though, was not interested in making a film about the archeology or paleontology of the Chauvet cave. Herzog’s subject is the source of humanity itself, the origins of the human soul. Shooting the film, he says, was like communing with the dead; indeed, there were a few moments when he says he could almost feel the presence of the ancient humans who created these striking images.

“The discoverers of the cave, they described very vividly having this feeling that eyes were looking upon them from the recesses of the dark, and even some of the scientists speak about it,’’ he says. “I, too, had this feeling vaguely once or twice, as if we were disturbing someone who had to crawl into a niche and hide away while we were filming.’’