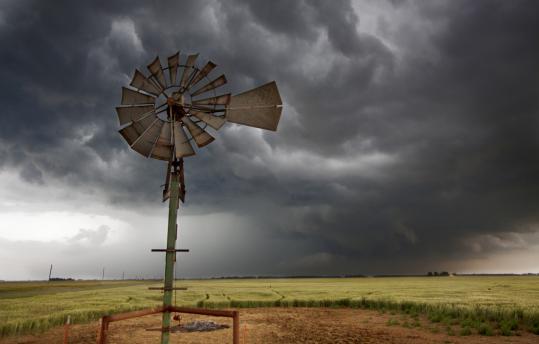 “Hunting a tornado can feel like swimming with a shark in dark waters,’’ the narrator says. “You know it’s there. You just can’t find it.’’

The voice, of course, is Bill Paxton, from “Twister.’’

“Tornado Alley,’’ the latest spectacular, which opens tomorrow at the Museum of Science, follows a team of 100 scientists and their fleet of vehicles mounted with Doppler weather radars, collectively called VORTEX 2. Their mission: to understand which supercell thunderstorms make tornadoes and why, and to plumb their “unseen architecture,’’ thus increasing warning times and saving lives. They spend a springtime scanning a seven-state swath of the Midwest known as “tornado alley,’’ home to 80 percent of the world’s most violent tornadoes. One wonders what happened to VORTEX 1.

You get what you might expect: the behind scenes sit-and-wait, then the psychedelic radar images blossoming on screen. The meteorologist geeks drop probes on the roadside and speak in crackling voices over the CB: “Rogue 11, deploy’’ and “Copy that.’’ Then a dark funnel gathers its strength, the soundtrack’s horns blare and kettle drums thunder, and “55-gallon oil barrels fly like leaves in the wind,’’ Paxton says, injecting the proceedings with requisite drama.

Meanwhile, Sean Casey (of The Discovery Channel’s “Storm Chasers’’) offers the thrill-seeker angle. He races around in his 14,000-pound armored Tornado Intercept Vehicle, or TIV, which looks like a prop from a low-budget postapocalyptic action movie. The TIV is equipped with a roof-mounted turret letting Casey shoot with his 70mm film camera in a 360-degree panorama. “It’s coming right at us!’’ he barks, and the turret swivels like he’s battling TIE fighters swarming the Death Star. Everyone in this documentary wants to be Han Solo.

“Tornado Alley’’ is awe-inspiring, doom-slinging fun, fluffy as the 10-mile-high clouds towering on the screen. More real might have been any grumbling between adrenaline junkie Casey, who seeks point-blank footage from the heart of a twister, and the more cautious researchers, who are actually doing science. In 43 minutes, only so many subplots can unfold.

Given tsunamis and other disasters swamping the planet, there’s some perversity to be had here, too. Weather geeks and motor heads alike might enjoy “Tornado Alley’’ and take pleasure in the chase. But when the clouds part and the destruction is revealed, can we feel good in the morning?

Ethan Gilsdorf, author of “Fantasy Freaks and Gaming Geeks,’‘ can be reached at www.fantasyfreaksbook.com.