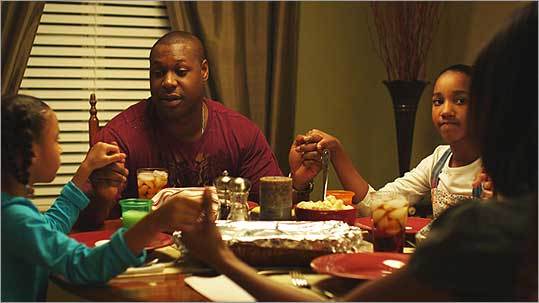 The Lord moves in mysterious ways. Devotional cinema — films intended to testify, revelate, preach, or convert — generally neglect the medium for the message. You have to take them on faith or not at all. “The Grace Card’’ is an exception; more drama than tract, it’s a low-budget Christian indie that just clears the runway on the sincerity of its performances and inclusiveness of its message.

That message — that the hardest people to love are the ones most in need of it — is bigger than any church, and “Grace Card’’ plays the God card sparingly. Set in a racially torn Memphis, it focuses on two cops. Sam Wright (Michael Higgenbottom) is African-American, upbeat, and a part-time pastor working to build his church to full-time status. His opposite number, Mac McDonald (Michael Joiner), is still bitter over his young son’s hit-and-run death 17 years before, and he takes out his disappointments on his surviving teen son, Blake (Robert Erickson), stressed-out wife, Sara (Joy Parmer Moore), and his new squad-car partner.

Mac has to hit bottom before he can look up, and “The Grace Card’’ gets him there with a few overly melodramatic twists and a lot of straight-up sympathy. Sam’s battle is to learn to extend Christian forgiveness to a racist jerk, a process that Howard Klausner’s script chews on thoughtfully, knowing that saying is easier than doing. Rooting from the sidelines is Sam’s grandfather, a preacher and civil rights-era survivor played by Louis Gossett Jr.

The director, David G. Evans, is a Tennessee optometrist and filmmaker making his bid for the Christian circuit big-time, and he’s off to a good start. The dialogue in “The Grace Card’’ is flat-footed and, aside from the two leads, the performances aren’t particularly nuanced, but the film benefits from a cast of semi-professional actors who look refreshingly like real people and mostly act like them. In its foursquare fashion, the film often gets closer to the domestic, financial, and spiritual dilemmas of middle Americans than a lot of hipper independent cinema.

The film also resists the temptation to evangelize, for the most part. “The Grace Card’’ is less about church than the community that gathers there, even if that community includes a Christian family therapist (Dawntoya Thomason) and a mysterious dashiki-clad man who represents Mac’s biggest spiritual challenge. Actually, Evans is onto something fairly radical here: He proposes a world without villains. He’ll never make it in Hollywood.