‘Big Momma’ is back looking a little flabby 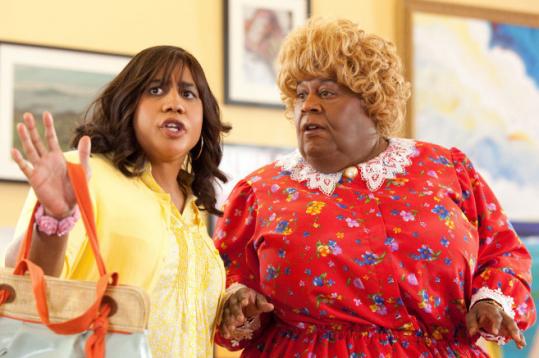 Fresh or not, creatively merited or not, here it comes: the third installment of Martin Lawrence’s big, dopey franchise. Oh, if only that meant – yep, this is what we’ve been reduced to – “Bad Boys III.’’ Instead, we get “Big Mommas: Like Father, Like Son,’’ with Lawrence pulling his prosthetic bazoombas, tablecloth dresses, and bad wig out of mothballs for another case as FBI agent-in-drag Malcolm Turner. And this time, Malcolm has a gal pal of sorts: his all-grown-up stepson, Trent (Brandon T. Jackson, “Lottery Ticket’’), a cross-dressing vision of homeliness in his own right.

Not that the two don’t have their issues (besides the whole tranny thing, that is). Malcolm proudly dreams of sending his kid off to college at Duke, but Trent defiantly pushes his own plan to hit the concert circuit as a rapper. Without Trent’s mom around to mediate — Nia Long has been written out here, for anyone keeping track — the spat spills over into Malcolm’s workday. When Trent foolishly lands himself square in the sights of a Russian baddie (Tony Curran) that Malcolm is after, dad and son are forced into hiding.

The pair are MacGuffined off to a girls’ high school for the arts, where Malcolm’s Big Momma alter ego conveniently fills a dorm mother vacancy, and Trent’s kneesocks-sporting “Charmaine’’ salivates at the pajama-party prospects. Then Trent falls for good-girl hottie Haley (Jessica Lucas, “Melrose Place’’), blows his cover, and sets the gangsters back on his trail. All of which is beside the point, of course — we’re here to see Big Momma get roped into modeling for a life drawing class, one of the few gags that sort of works here.

The listless comedy isn’t helped any by punchless sparring between Momma and an attitudinal ballerina (Portia Doubleday, “Youth in Revolt’’) she can’t help lecturing. “Big Mommas’’ is going to sermonize about body image? Really? Director Patrick Whitesell (“Big Momma’s House 2’’) also tries to change up the tone with a “Fame’’-style musical number here and there, but the best the movie manages is a Disney Channel-ing duet between Jackson and Lucas’s characters.

Looking back, it’s strange to remember that the first two movies were both hits, and that Paul Giamatti and Terrence Howard even saw enough in the premise to sign up for the original. At this point, it’s really all just flab.

Written by: Matthew Fogel, from a story by Don Rhymer and Fogel