Sci-fi festival lands a mix of old and new 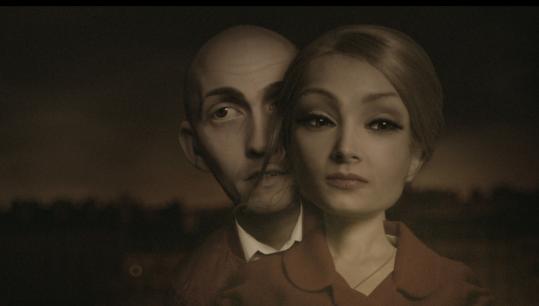 In the future, the world will be ruled by soul-sucking corporations. The alien kept in a government lab will break through its glass enclosure and escape. Once the enemy ship’s weakness is found, one hit and, boom!, it will explode in a fiery ball. The villain will be sucked through an air lock, while the hero survives, strapped to his command chair. Then, the hero (or villain) will time travel to the past (or future) to kill his nemesis, and none of this will have ever happened (or, uh, all of this will happen).

Clichés such as these will be laid bare, debunked, and groaned-over at SF36, the 36th annual Boston Science Fiction Film Festival, which invades the Somerville Theatre today through Feb. 21. As in past years, the SF36 program is divided into two parts: the festival, which features new films and several area premieres, and the 24-hour marathon of newcomers, favorites, and restored classics, which runs noon to noon, Feb. 20-21. Several directors will be on hand to introduce their films.

“Once you’ve felt it, you want to come back,’’ Garen Daly says of the event’s vibe. “It’s Brigadoon; it’s a community that rises out of nothingness, and then disappears.’’ Daly, who has been producing the sci-fi celebration since 1987, claims that it’s the longest-running genre film fest in the nation. Many moviegoers have been attending for decades. “My job is not curator but custodian, to make sure they have a good time.’’

Judges have selected some 20 new features and shorts from around the world — Spain, Mexico, Canada, Japan, Sweden, Finland, and Ireland are represented — plus the usual dose of “schlock masterpieces,’’ such as a 1962 subtitled (not dubbed) print of the Japanese monster movie “Mothra’’, and rare classics that include a 1916 silent version of “20,000 Leagues Under the Sea’’ screened with live musical accompaniment. Vintage cartoons, movie trailers, and contests round out the weekend.

Three programs of shorts give air-time to smaller-scale directors. “We really want to support young filmmakers find their voices,’’ Daly says. Highlights from the Dangerous Visions program include “Time’s Up, Eve,’’ a noir-ish, black and white short from local filmmaker Patrick Rea about a woman fighting off an alien abduction, and “Solita,’’ a thesis project by recent Boston University film program graduate Steven Fine.

“It’s a short film that has the ambition to ask a big question,’’ Fine writes on the International Movie Trailer Festival blog. “If you had to choose, would you pick the cold isolation of space or the warm environment of a virtual reality earth?’’ Shot half on green screen and half on location, for a student film “Solita’’ sports impressive special effects.

Another homegrown film on the Retro Speculatives program is “Battle Beyond Belief,’’ Littleton resident Bob Quinn’s goofy sci-fi parody about an elite team on a mission to rescue an astronaut trapped on a hostile alien planet (it’s cliché-ridden, in a good way); plus there’s “Tin Dreams,’’ a Pixar-like cartoon about a toy robot’s dream-life. Also of note is “[Expletive] Me Ray Bradbury,’’ in the Selected Short Subjects program, a musical video tribute chock-full of references to the author’s oeuvre.

As far as features, the festival includes the New England premiere of “Summer Wars,’’ which won best animated film in its native Japan; the US premiere of “Star Wreck: In the Pirkinning,’’ a Finnish spoof of “Star Trek’’; “The Wild World of Ted V. Mikels,’’ a documentary about the noted schlock-filmmaker narrated by John Waters; “The Revenant,’’ a zombie buddy film that goes sci-fi; and the US premier of “Zonad,’’ directed by John Carney (“Once’’), about a convict who tricks an Irish village into believing that he’s an alien.

The festival’s climax is the marathon, which typically attracts about 600 fans. This year’s all-day, all-night bender includes a screening of the only remaining print of “Battlestar Galactica,’’ the 1978 movie that launched the original TV series; the recent “young Kirk and Spock’’ “Star Trek’’; the New England premiere of “Metropia’’ (2009), a Swedish dystopian animation with the voices of Juliette Lewis and Vincent Gallo; the Korean monster movie “The Host’’ (2006); the campy, 1955 “This Island Earth’’ deconstructed by “Mystery Science Theater 3000’’; Roger Corman’s “Last Woman on Earth’’ (1960); David Cronenberg’s freaky “Videodrome’’ (1983); the New Zealand post-apocalyptic story “The Quiet Earth’’ (1985); and “Lady Terminator’’ (1988), a nearly scene-for-scene Indonesian rip-off of “The Terminator.’’

“[The audience] is going to be quipping and watching,’’ says Daly of the latter film. “I always book at least one or two bad films so people can have a good time.’’ Interspersed among the movies will be contests testing the audience’s prowess at answering movie trivia, making a hat out of tinfoil “to ward off alien mind melds,’’ and mimicking an “alien mating cry.’’ The last champ, Daly says, won with a “combination of whistles and songs.’’

The marathon also features the recent ultra-hyped, “District 9’’-like “Monsters,’’ reportedly made for $15,000 by newbie Gareth Edwards, whose crew traveled through Mexico and Central America, filming at improvised locations with actors met along the way. Later, Edwards composed some 250 effects shots in his bedroom.

Yes, “Monsters’’ may be another film about an alien invasion. But SF36 proves that as genres bend and high-brow melds with low-brow, the definition of science fiction is broader than ever. “It can be space to fantasy to something out of the ordinary,’’ says Garen Daly of the criteria ruling this year’s fest. “It has to be good enough and interesting enough to spark thought and conversation.’’

At the very least, SF36 should inspire some new clichés, and impressive foil hats.

For more information on SF36, visit www.bostonsci-fi.com. Ethan Gilsdorf can be reached at ethan@ethangilsdorf.com.