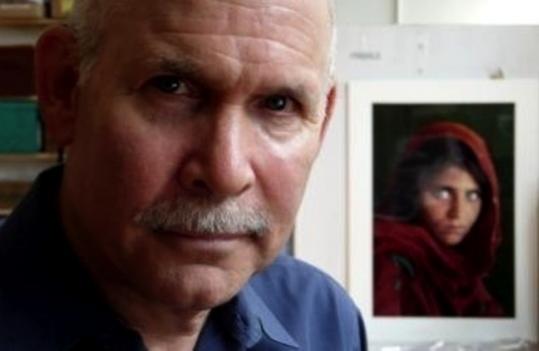 Photographer Steve McCurry is among the talking heads in “Views on Vermeer.’’ (Arthouse Films)
By Mark Feeney Globe Staff / January 5, 2011

A wonderful deadpan joke defines the documentary “Views on Vermeer.’’ What could be more incongruous than a moving picture about painting’s supreme master of stillness?

So often art onscreen is treated with ponderous, if not phony, reverence. Vermeer is a particularly tempting target for such treatment, with the special, almost-mystical place he holds in the art firmament. Fewer than three dozen of his paintings survive. Those paintings exalt the ordinary, taking a simple interior and investing it with a quality that can verge on the sacred: stillness as transcendence. “His paintings are like they were blown on the canvas with a breath of air,’’ the painter Chuck Close says in “Views on Vermeer.’’ “For me, he didn’t paint stuff. He painted light.’’

Close is among the impressive batch of talking heads who populate the documentary. They include the photographers Joel Meyerowitz, Philip-Lorca diCorcia, and Steve McCurry; the writers Lawrence Weschler and Tracy Chevalier (she wrote the best-selling novel “Girl With a Pearl Earring,’’ based on the Vermeer painting); the architect Philip Steadman, who’s built three-dimensional versions of the room which seems to recur throughout Vermeer’s domestic scenes; and various other artists, curators, and dealers.

Explaining the ineffable (and ineffability is to Vermeer what color is to Matisse) is like trying to put the ocean into a saucepan. The Dutch directors Hans Pool and Koos de Wilt have the good sense not to try. Instead, their film circles and surveys and simply, or not so simply, appreciates. In a sense, they take their cue from their subject. As the art dealer Otto Naumann says, “Many Old Masters leave nothing to the imagination. Vermeer leaves everything to the imagination.’’

The first word in the film’s title is plural for a reason. “Views’’ consists of 10 discrete chapters, each focused on one or two speakers, usually seen in studio or office or otherwise out and about, discussing Vermeer.

Much of the film is quite marvelous: relaxed yet lively, modest but confident. It’s like a series of bracing conversations about an endlessly interesting subject. Only two of the chapters come up short. In one, the filmmakers cut between Chevalier reading from her novel and McCurry’s assistant opening up a package containing the photographer’s most famous image, “Afghan Girl,’’ the National Geographic cover shot of a young woman. The segment is uncharacteristically facile and reductive.

The final chapter is the other misfire. Self-involved and portentous, Alain de Botton gasses away about how Vermeer’s work indicts our media world of hype and buzz. “There’s [a photograph] of Hilary Swank,’’ announces the author of “How Proust Can Change Your Life,’’ looking at Vanity Fair’s website. “Would Vermeer have painted her?’’ No, he decides. It’s safe to assume Vermeer wouldn’t have painted de Botton either.

In English (almost entirely) and Dutch (with subtitles)