Dolls are artist's bridge to reality 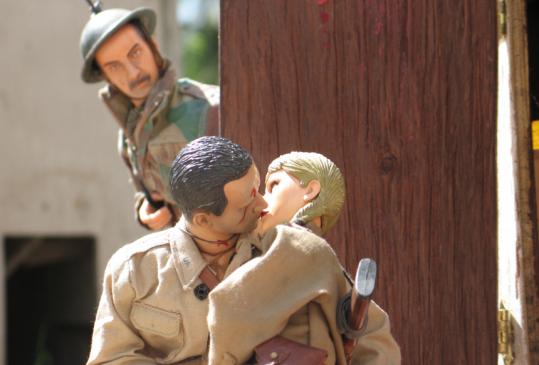 Like all accomplished war photographers, Mark Hogancamp puts himself at risk. He shoots fugitive moments of violence, anguish, and bravery. But Hogancamp’s work differs from others’ in one key respect: The combat zones he enters don’t entirely exist in the real world. It’s the battlefield of his emotions that he’s trying to capture on film.

“Marwencol’’ is a documentary about this peculiar man and the fictitious, painstakingly-detailed, 1/6-scale town he built in his yard. Set in Belgium during World War II and populated with dozens of buildings, military vehicles, and more than 100 foot-high, poseable action figures, Hogancamp’s simulacrum is called Marwencol.

“Everything’s real,’’ Hogancamp gushes at one point in the film, demonstrating how a tiny pistol in one soldier’s hands has a working hammer and replaceable clip. “That all adds to my ferocity of getting into the story. I know what’s inside every satchel,’’ he says. Those contents include a stamp-size deed proving that Captain “Hogie’’ Hogancamp, the real man’s 12-inch alter ego, owns the doll-house-size, make-believe bar in this make-believe realm.

The fine line separating real from imagined is the focus of this provocative documentary, winner of the Jury Award for best documentary at the SXSW Film Festival. “Marwencol’’ opens at Kendall Square Cinema on Friday.

“I was immediately taken by the world and wanted to know more,’’ says director/producer/editor Jeff Malmberg in a recent phone interview. Malmberg first saw Hogancamp’s photos in an art magazine. “At first glance, Mark could easily be judged as hermetic and creepy,’’ the filmmaker adds. “He’s a grown man who spends his days playing with dolls.’’

But Hogancamp’s sphere, and his story, is no child’s play.

Marwencol — the name combines Mark with two significant women in his life, Wendy and Colleen — is overrun with Allied and Nazi soldiers. As the story comes alive in Hogancamp’s head, the dolls torture each other, cat-fight, and fall in love. Their brutal and sometimes beautiful shrunken-down world ultimately becomes a realm for loss and recovery.

What led to Hogancamp retreating into his fantasy world is barbaric. Ten years ago, when Hogancamp was 38, he was beaten by five men outside a bar in his hometown of Kingston, N.Y. — badly enough to cause coma and brain damage (the motive for the beating is revealed in the film). Returning to “real life’’ proved difficult. He suffered from post-traumatic stress disorder (PTSD), and was understandably suspicious of the world. Worse, he couldn’t remember who he was before the attack.

“When the teenagers kicked my head to pieces,’’ Hogancamp says in the film, “they wiped away everything.’’ What was I like, he asks; was I mean? He has to start over.

To recover his motor skills and, hopefully, overcome his emotional trauma, Hogancamp creates what he calls “my therapy.’’ Having been a talented artist before his brain injuries, he buys dozens of historically accurate toy soldiers and civilians and, with a god-like hand, inserts each one into WWII Belgium. He paints their faces with scars, blood, dirt, and fatigue. To weather the tires of his army jeeps, he drags them behind him during long walks.

Many dolls resemble and represent real-life family and friends. There’s “Hogie’’ (Hogancamp himself); Anna Romanov (Anastasia, his ex-wife); and a British corporal named Albert Bodie (Bert Bodie, his friend). Others have more fanciful origins, like Deja Thoris, “the Belgian witch of Marwencol,’’ a composite of various femme fatale characters. To slip Deja into the story line, Hogancamp built her a time machine made from an old VCR and cellphone.

Despite no training in photography, and his Pentax having a broken light meter, Hogancamp takes gorgeously composed shots. He imagines dramatic situations between the characters, then poses them in highly charged, heart-rending moments of conflict and climax — his own counterpart strung up and cut, for example, until a legion of female dolls come to his rescue and mow down the Nazis. The photographs become real-world freeze-frames of Hogancamp’s ongoing narrative of life in Marwencol. Much of the film shows these stills, with Hogancamp narrating the improvisational story, which, unfortunately, he never writes down.

“These photos are amazing,’’ says one of the producers, Tom Putnam, in a separate phone interview. “When you see [them] on a theater screen there is so much detail and so much depth, you really get lost.’’

“That guy couldn’t take a bad photo,’’ adds Malmberg, who makes his directorial debut with “Marwencol.’’

The film also records how, in 2006, Hogancamp was offered a gallery show in New York, where his self-taught therapy threatened to become “art.’’ This is when Malmberg first met Hogancamp and began shooting.

The filmmakers turned a micro-budget into an asset. Putnam, Malmberg, and his wife and co-producer, Chris Shellen, were all classmates at the USC film school, so making “Marwencol,’’ Putnam says, felt like “reliving film school,’’ where “everybody does everything’’: a little camera work, a little editing.

Malmberg visited Hogancamp dozens of times, often filming one-on-one in available light. Going low-impact, he was able to capture intimate moments. “The process of hanging out with him was talk therapy. I felt my job was to listen, and be kind,’’ he says. In the process, the two became friends.

“I never wanted to make one of those movies where he’s your lab rat,’’ Malmberg explains. “. . . Mark was constantly upending my expectations. I was falling deeper and deeper into his world and saw how beautiful it was.’’ Now, the director says some of his favorite days were with the camera shut off, just hanging out with Hogancamp.

“There’s a tendency among journalists and documentary filmmakers to put up a wall between them and their interview subjects,’’ Putnam says. “Jeff did the opposite.’’ Now, director and star speak on the phone almost every day, and in Marwencol there resides a Jeff Malmberg doll.

It’s hard not to see the parallels between Marwencol and other fantasy realms, be they role-playing games such as Dungeons & Dragons or virtual-reality spaces like Second Life. But due to his PTSD, Hogancamp’s need to escape was no flight of fancy. “Marwencol’’ shows that desire was necessary to his survival.

In those who suffer PTSD, traumatic memories “continue to be very alive,’’ says Kate Young, a psychologist on the counseling staff of Santa Clara University in California. The treatment is to get the traumatic memories integrated into one’s life story, and to do so requires being exposed to them again and again.

“It is common for people to reenact traumas in a variety of ways in order to gain a sense of mastery over the situation,’’ Young says. “The key is to be exposed in a way that is not re-traumatizing.’’

That is what Hogancamp is doing with Marwencol. In the film, he acts out the night of his attack, this time in a war zone, with Nazis beating his doll proxy nearly to death. Sometimes the events come out differently — he triumphs, or is saved. Other times, they follow the real-life script.

Hogancamp’s approach may be self-taught and crude, but Marwencol did give him a second life. There, he’s able to be someone else, act out, do battle with his greatest fears, and tell a story that’s never-ending.

“I wish I could go live in Marwencol with him,’’ says Putnam. “I think he got what everyone secretly wants.’’

Ethan Gilsdorf is the author of “Fantasy Freaks and Gaming Geeks.’’ Contact him at www.ethangilsdorf.com.