The girl with the punk alter ego 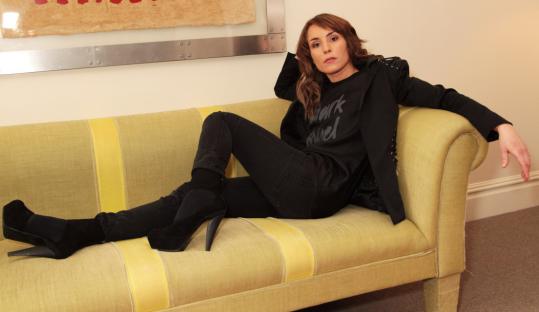 Noomi Rapace, pictured in London last March, says she did “everything I could to become’’ Lisbeth Salander. “I opened up a little anger, a little aggression.’’ (Dave Hogan/Getty Images/File)
By Tom Russo Globe Correspondent / October 29, 2010

When late Swedish author Stieg Larsson wrote “The Girl With the Dragon Tattoo,’’ his crime thriller about punked-out, brutally damaged computer hacker Lisbeth Salander and Mikael Blomkvist, her crusading-journalist booster, he created a phenomenon. That much became clear stateside when the book — an actual book! — landed on entertainment magazine covers. And when the foreign screen adaptations of “Dragon Tattoo’’ and its two sequels, “The Girl Who Played With Fire’’ and “The Girl Who Kicked the Hornet’s Nest,’’ started playing US multiplexes that ordinarily wouldn’t know Swedish films from Swedish meatballs. (“Hornet’s Nest’’ opens locally today.)

Much of the credit for the movies’ popularity goes to Swedish actress Noomi Rapace, 30, whose intense portrayal of Lisbeth is generating Oscar buzz. Rapace recently spoke with the Globe from Los Angeles, where she stopped to receive a Hollywood Spotlight Award during a short break from shooting “Sherlock Holmes 2’’ in London.

Q. Sounds like your life has changed just a little in the last year or two.

A. Yeah, everything happened pretty quickly, and I was a bit unprepared for the explosion. When the first film was released in Sweden, the producers called wanting me to do an extra press conference because there were so many journalists from all over Europe that had arrived in Stockholm. And I freaked out. I just wanted to go hide, because I hardly spoke any English.

Q. You must be a quick study, hearing how fluent you sound now.

A. I just hate when something’s standing in my way. So I decided I was going to make the English language mine. I started to watch movies without reading subtitles, and now I’m living in London and working on it there.

Q. You’ve said that when Lisbeth was being cast, the filmmakers didn’t automatically see you as the character. Were there past roles they associated you with?

A. I’ve always done complicated, messed-up characters that are struggling with something. So it’s not like I was doing comedies. But I look much more girlie than Lisbeth does. So when I met the director, I told him that I’d do everything I could to become her. And the day after I got the part, I started training, doing a mix of kickboxing and Thai [martial arts] — four days a week for seven months. I cut my hair, did all those piercings, and took motorcycle lessons. And I opened up a little anger, a little aggression.

Q. We couldn’t help noticing that in “Girl Who Played With Fire,’’ part of Lisbeth’s bad-girl look is a Yankees cap and hoodie. Please don’t tell us Lisbeth is a fan — you might’ve heard the Yankees aren’t popular here.

A. That was my pick [laughs]. But only because I love to dress down. Best thing you can wear when you’re working.

Q. The relationship between Lisbeth and Blomkvist is the heart of the trilogy, but in the second and third stories, they actually have very few scenes together. Is it tricky to further their relationship onscreen when the stories are structured that way?

A. It was odd — it always felt like I was talking to Michael [Nyqvist, who plays Blomkvist], even though I wasn’t. I felt like something out in space, because I was lonely, but I still felt like I was connecting to him from somewhere out there.

Q. “Hornet’s Nest’’ has a different feel from the first two films in that Lisbeth spends the first half of the story in a hospital room recovering from gunshot wounds, rather than out Tasering bad guys. Did that make it tough to build suspense?

A. Yeah, it felt like a prison sometimes. . . . You have to find a silent language, a way to give clues to the audience about what’s going on.

Q. Have you followed the news about David Fincher’s English-language remake of “Dragon Tattoo,’’ or Rooney Mara from “The Social Network’’ being cast as Lisbeth?

A. Not really. I’ve been working so much, and I’m not so sentimental. Even back when the rumors about a remake started, I was really clear that I was done with Lisbeth and I didn’t want to play her again. It’s up to somebody else.

Q. What can you tell us about your “Sherlock Holmes’’ character?

A. She’s a Gypsy. I think that all Gypsies, at least the ones I’ve met [through Rapace’s father, a Gypsy flamenco singer from Spain], are used to being treated like [expletive], almost like homeless people. So she’s seen a lot, and she can take care of herself.

Q. We’ve also seen your name mentioned as a possibility for a new “Alien’’ prequel that Ridley Scott is eyeing.

A. I’ve been reading a lot of things about me that I didn’t know [laughs]. But I’ve met Ridley a couple of times, and I would love to work with him.

Q. Until then, we’ll catch you on the “Sherlock’’ publicity beat, I guess.

A. In my baseball cap.