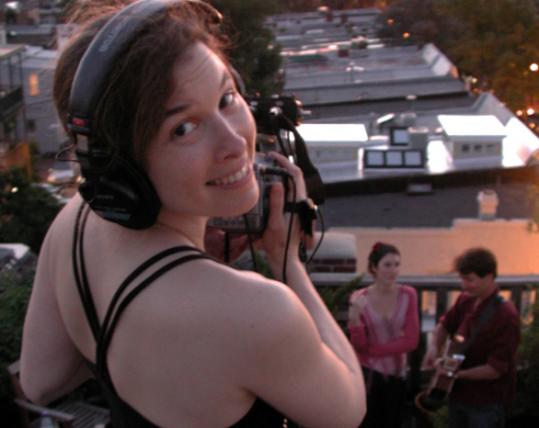 “A festival like Newburyport’s is an incredible gem for us filmmakers. It is such a necessary platform for us to get films like this out to the public,’’ filmmaker Liz Canner said.

Canner will be on hand when her “Orgasm Inc.’’ kicks off the seventh annual Newburyport Documentary Film Festival tomorrow night.

“Orgasm Inc.’’ explores pharmaceutical industry efforts to develop a Viagra for women. Canner now lives and works in Vermont, but she is a Groton native and has called Waltham, Boston, Cambridge, and Somerville home over the years. She’s one of several filmmakers putting a local sheen on this year’s festival.

Canner has screened “Orgasm Inc.’’ in several countries, but festival audiences elsewhere sometimes don’t quite catch the film’s offbeat attitude, she said. “I find New England audiences get all the types of humor in the film, maybe because I’m a New Englander.’’

On Saturday afternoon, award-winning editor and part-time Plum Island resident Alison Ellwood (“Enron: The Smartest Guys in the Room’’) will screen the 2006 TV documentary called “The Human Behavior Experiments’’ and discuss the film and the industry before an audience including local high school students.

The students will be admitted free as part of the festival’s annual outreach, which last year included a screening at the middle school.

There also will be student journalists shooting video at some events for future Web broadcast.

On Saturday night, the fest will screen “Do It Again,’’ Globe reporter and Arlington resident Geoff Edgers’s comic tale of his midlife-crisis attempt to reunite the Kinks. Director Robert Patton-Spruill, who lives in Roxbury, will attend the program.

On Sunday, David Binder will present “Calling My Children,’’ based on photo essays he did for magazines in the 1980s and ’90s, documenting the life and loss of Gail Farrow, a young wife and mother with AIDS, and following her family after her death. His photos will be on display at the Screening Room.

Also on Sunday, “Family Affair’’ director and Somerville resident Chico Colvard will be flying back from a festival in Maryland just in time to discuss his deeply personal documentary. When he was 10, Colvard accidentally shot his sister in the leg; as an adult, he visits his family members with camera in hand to expose the dark secrets of abuse the incident exposed and the different ways of coping.

“Family Affair’’ played at Sundance earlier this year and has been picked up for Oprah Winfrey’s new cable channel. A small theatrical release is planned later this fall. The film was nine years in the making, and Colvard has taken it to many educational venues to discuss the issues it raises.

“A festival audience brings something that is a little more authentic’’ than the academic venues, he said. “You’re more likely to find someone in a festival audience who will stand up and share their story instead of just dissect my story.’’

Colvard credited festival director Michelle Fino with attracting him and other filmmakers to the relatively low-profile Newburyport fest.

“The personality of the programmer is really important to me,’’ Colvard said. “Somebody like Michelle who knows the film, and communicated to me in ways that suggest she really identifies with the film, she sees the value in the film. I trust that she’s going to take care of it.’’

Fino said the festival team saw about 200 submissions this year to pick the 14 features and three shorts that will be screened at the Firehouse Center for the Arts and the Screening Room theater, a couple of blocks apart downtown.

Fino said the list of local films wasn’t necessarily a conscious emphasis, given the workload of screening the entries. “If I were more conscious, I’d know that, but not really,’’ she said with a laugh. “There are some really good films, and when you hear they’re from Boston, it’s like, we have to get you here.’’

Submissions were down a little bit, and she attributes that to the recession, even though the festival has kept entry fees the same as last year, all under $50.

“If you think about how many film festivals there are, and the filmmakers, a lot of them are spending their own money to submit, so it can get costly for them,’’ Fino said.

Daytime screening tickets are $7, while tickets to three evening events are $10-$12. All-access weekend passes are $50. Tickets at www.firehouse.org or 978-462-7336. Joel Brown can be reached at jbnbpt@gmail.com.