Documentarians get close to pastry competition 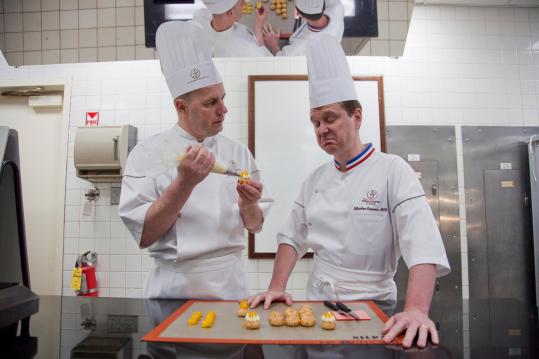 And you thought “Top Chef’’ was grueling.

The filmmakers gained unprecedented access to the tension-packed competition where a wayward millimeter of glaze on a cream puff or an elaborate sugar sculpture that accidentally shatters can mean the difference between success and failure. As Pennebaker notes, “In France, good is the enemy of the best. Chefs are celebrities in America, but competitions are all made up. The M.O.F. has real history and cultural value.’’

Pennebaker and Hegedus were speaking in a conference call from their New York office.

The MIT-educated Pennebaker, director of the seminal 1967 documentary “Don’t Look Back,’’ with Bob Dylan, was a pioneer of cinéma vérité along with Richard Leacock, Albert Maysles, and others 50 years ago. Pennebaker and Hegedus married in 1982. “We get divorced at least four times over the course of a film,’’ he says. “We try to maintain our friendship always.’’ Together, they have directed, among other documentaries, the Oscar-nominated “The War Room,’’ about Bill Clinton’s 1992 presidential campaign. “Kings of Pastry’’ follows the filmmakers’ fascination with passionate individuals on a quest. For Hegedus, who hails from Medfield, the interest was more personal.

“My grandfather apprenticed as a boy to a baker in Germany. After he immigrated to New York, he opened two high-end bakeries in Brooklyn in the 1920s,’’ Hegedus says. Besides that culinary connection, Hegedus’s great-grandfather was a chef at a German restaurant in New York and also cooked for Franklin Delano Roosevelt and his family at their home on Campobello Island.

“Kings of Pastry’’ originated when Hegedus and Pennebaker’s friend Flora Lazar decided to enroll at Chicago’s French Pastry School, run by Alsace-born chef Jacquy Pfeiffer. Lazar told the filmmakers about “the epic and bizarre pastry competition’’ that Pfeiffer was about to enter, Hegedus recalls. To make the plot more enticing, she says, Pfeiffer’s coach for the event was Sebastien Canonne, who had started the pastry school with him and who had several years earlier won the competition and its coveted blue, white, and red collar that forever identifies the chef as an M.O.F.

“We flew out and met them. . . . The more we heard the more interested we became,’’ says Hegedus. Later, she and Pennebaker traveled to Lyon to shoot the competition. “It’s a whole other world; it’s like another planet. But the real difficulty comes after the win, when the M.O.F. must mentor and teach at the highest level possible.’’

Pennebaker, 85, and Hegedus, 58, began working together in the late 1970s, when she edited his shelved footage of the infamous 1971 debate on feminism with Norman Mailer that became “Town Bloody Hall,’’ released in 1979. It wasn’t the first time Pennebaker had filmed the volatile Mailer. Along with Leacock, who was in Mailer’s graduating class at Harvard, Pennebaker served as a cinematographer for Mailer’s opus “Maidstone’’ (1970) and shot the now-legendary fistfight between Mailer and actor Rip Torn (revisited in the new documentary “Norman Mailer: The American,’’ directed by Joseph Mantegna). “I tried to draw theatrical talent like Norman and Dylan into documentary filmmaking, but they were so focused and preoccupied it was hard for them to take on this new thing,’’ Pennebaker says. “But Norman understood filmmaking; he knew we could not plan anything, that the camera was watching every move and he could not fake it.’’

One might think that the proliferation of cooking competitions such as “Top Chef’’ and “MasterChef’’ and the existence of the Food Network would make “Kings of Pastry’’ an easy sell to American television. Not so, says Pennebaker. “Kings of Pastry’’ elicited lots of interest in Europe, where it has already been broadcast widely. “There are more slots for individual documentaries in Europe,’’ he says. “American TV wants a series.’’

He shrugs off any notion that his landmark cinéma-vérité style has led, circuitously, to “reality’’ shows such as “The Real Housewives’’ franchise. “Television depends on advertising so it jumped on an inexpensive formula,’’ Pennebaker says. “The problem is that it’s about the bottom line. So any good, original documentary is rejected because it’s just one. They want a month of programming.’’

D.A. Pennebaker and Chris Hegedus will present “Kings of Pastry’’ at the Coolidge Corner Theatre next Sunday at 3 p.m.