My Tale of Two Cities 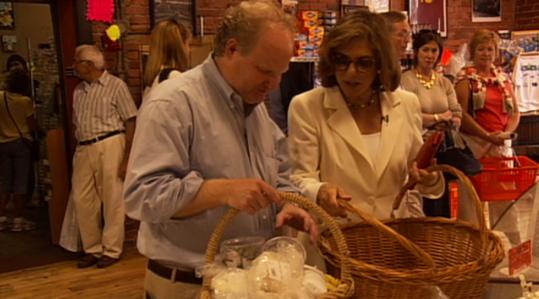 Carl Kurlander and Teresa Heinz Kerry shop for cheese in a scene from “My Tale of Two Cities.’’
By Mark Feeney Globe Staff / July 29, 2010

Pittsburgh is a great subject for a documentary. An even greater one might be its transformation over the past half century, from US Steel’s neighborhood to Mr. Rogers’s postindustrial one (Pittsburgh was home to the children’s television series). Carl Kurlander’s lively and annoying “My Tale of Two Cities’’ is neither of those documentaries.

The problem starts with that pronoun in the title. This is very much “The Carl Kurlander Show.’’ A Pittsburgh native, he moved back to his hometown after two decades in Los Angeles as a screenwriter (his best-known credit: “St. Elmo’s Fire’’). “It’s not ‘Roger & Me,’ ’’ he says, trying to explain the movie he wants to make. “It’s Mr. Rogers & Me.’’ The Michael Moore comparison is apt. Kurlander is all over his documentary, as Moore is in his. He’s a sweet-tempered, schlubbier version of Moore. Like Moore, Kurlander presents himself as a bit of a clown. Unlike Moore, he’s not a natural performer.

He’s also not much of an economist or urban planner. Kurlander’s basic premise, that his hometown is going down the tubes, is specious — something that the documentary’s icky-upbeat ending tacitly acknowledges. That finish hinges on the Steelers’ 2009 Super Bowl victory. Hey, Pittsburgh is back! So why wasn’t it back when they won in 2006?

It’s true that the city’s population is half what it once was. It’s also true that it’s vastly cleaner and more livable than during its industrial heyday, and that the presence of such premier service-economy institutions as Carnegie Mellon University and the University of Pittsburgh Medical Center have positioned it far better in a postindustrial economy than many other former industrial cities. Has Kurlander ever been to Detroit?

Perhaps sensing how little the camera warms to him, Kurlander keeps things moving right along as he plays straight man to a variety of Pittsburghers: former Steelers star Franco Harris, the city coroner, Mr. Rogers’s widow, former Treasury secretary Paul O’Neill, Andy Warhol’s nephew, an old girlfriend, his mother. Kurlander’s most frequent foil is his wife, who keeps telling him how much she prefers the idea of raising a child in Pittsburgh to doing so in Los Angeles.

At one point, Kurlander shows his spouse blowing bubbles. It’s that kind of movie. He misses few opportunities to cutesify. When his stepmother comes to town for a visit, he arranges for his stepfather to show up unannounced for a reunion. There are several brief animated sequences. On a visit back to LA, he takes his wife and daughter to their old house and they visit an amusement park. In Pittsburgh, he goes cheese-shopping with Teresa Heinz Kerry — her first husband was a pillar of the city’s establishment — and lays it on a bit too thick about how relieved he is when she picks up the tab. It’s $142.95. They don’t have steel in Pittsburgh any more, but they would seem to be doing just fine as regards gourmet cheeses.

MY TALE OF TWO CITIES