'The Sun Behind the Clouds: Tibet's Struggle for Freedom 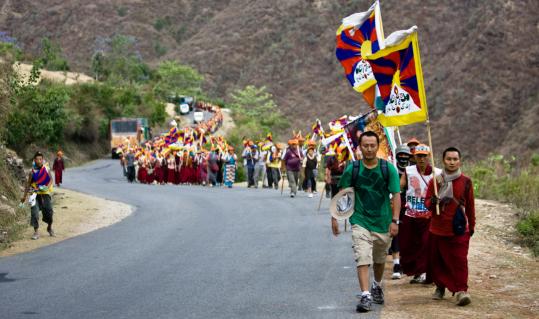 A grim contradiction haunts “The Sun Behind the Clouds: Tibet’s Struggle for Freedom.’’ Wondrous color and beauty often fill the screen: monks’ robes, protesters’ banners, the spectacular Himalayan landscape. Most wondrous of all are the face and character of the Dalai Lama. Yet against that is the fact of China’s domination of Tibet. Few things are as depressing as a David-and-Goliath story with no slingshot — or even the prospect of one.

The documentary filmmakers Ritu Sarin and Tenzing Sonam have made several films about Tibet (she’s Indian, he’s Tibetan). “The Sun Behind the Clouds’’ looks at events in 2008. China’s hosting of the Summer Olympics had a double effect: making the Chinese government especially sensitive about Tibet, which it has occupied since 1951, and inspiring worldwide protests for just that reason.

The film incorporates several approaches. One is to follow a group of Tibetan exiles on a months-long protest march, attempting to gain access to their homeland from northern India. Another is to include news film of protests in Lhasa, the Tibetan capital, as well as surreptitious interviews with ordinary Tibetans (there’s some archival footage, too). Those protests, in March 2008, were the most extensive since 1959, when the Dalai Lama fled to India.

For all its worthiness politically, “The Sun Behind the Clouds’’ is a lackluster film. That changes whenever the Dalai Lama is on screen. We see him at his residence in the northern Indian city of Dharamsala, as well as making public appearances in the United States and Western Europe. To watch his meet-and-greet with Prince Charles is truly to see worlds colliding — those worlds being humanity at its most impressive and Madame Tussauds at its most animated (relatively speaking). The Dalai Lama also gives interviews to the filmmakers. He’s the most prominent of several talking-head subjects, nearly all of them Tibetan activists.

While never heavy-handed about its politics, the film makes no effort to disguise its strong anti-Chinese bias. The Chinese are their own worst enemy, in that regard — as when we see a foreign ministry spokeswoman denounce Tibetan culture as “a theocratic serf system . . . the darkest system in human history.’’ Somewhere Pol Pot is smiling.

The closest thing to debate in the movie is over the Dalai Lama’s “middle way’’ policy, which seeks Tibetan autonomy under Chinese rule rather than outright independence. Several activists criticize the Dalai Lama for what they see as self-defeating moderation. It’s hard to imagine what alternative the Dalai Lama has. “The only thing we know is that empires rise and fall,’’ says Lhadon Tethong, former executive director of Students for a Free Tibet. That’s certainly true. But as another Tibetan activist notes, the situation of his people recalls that of Native Americans and Native Australians in the 19th century. More Chinese than Tibetans now live in Lhasa. Cultures fall, too, especially when they’re shoved.

THE SUN BEHIND THE CLOUDS: Tibet’s Struggle for Freedom Directed by: Ritu Sarin and Tenzing Sonam

Written and narrated by: Sonam

In English, Tibetan, and Chinese, with subtitles