From Polanski, a suspenseful ‘Ghost Writer’ 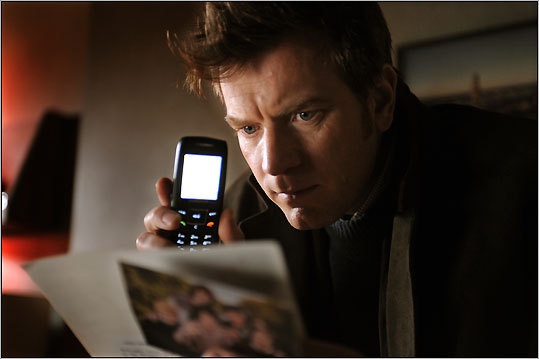 ‘The Ghost Writer’’ is a minor treat from a major filmmaker, an entertainment put together with dark, elegant confidence. It’s not a work that needs to be reckoned with, like 2002’s “The Pianist.’’ If you boycott Roman Polanski on principle, as is your right, you can sleep untroubled by thoughts of the masterpiece you might be missing. Yet it has to be said: Another director would almost certainly have bobbled this devilish mixture of paperback suspense, political chicanery, and jet-black comedy. In Polanski’s hands, it’s an unholy pleasure: a diversion that stings.

Adapted by the director from Robert Harris’s 2007 novel “The Ghost,’’ the movie concerns a hack writer played by Ewan McGregor - tellingly, we never learn the character’s name; like the heroine in “Rebecca,’’ he’s in thrall to people bigger than he - who’s hired to ghost-write the memoirs of Adam Lang (Pierce Brosnan), Britain’s newly ex-prime minister. The previous ghostwriter died in mysterious circumstances, his body washing up far from the ferry he supposedly jumped off.

With four weeks to adapt the manuscript and Lang about to be subpoenaed by the Hague, our Ghost is initially unwilling, but the money’s good and the chance to sit at the power table is irresistible. He’s quickly installed at Lang’s residence-in-exile, a swank high-tech fortress on Martha’s Vineyard. (Due to Polanski’s, ah, legal problems, German locations convincingly substitute.) The vibe is nearly as gothic as Manderly in “Rebecca,’’ complete with two Mrs. Danvers: Lang’s trim, all-knowing aide Amelia (Kim Cattrall in a neat career game-changer) and the ex-PM’s tightly wound wife, Ruth (Olivia Williams), who seethes at being miles from the action.

“The Ghost Writer’’ may be based on another man’s novel but it has been expertly tailored to its director’s abiding obsessions: murder and mayhem just out of sight, dark stretches of foreboding water, a hero swimming farther out to sea, hoping the sharks won’t bite. As is usual with Polanski, we’re meant to identify with the main character while groaning at his missteps; suspense here comes as much from the Ghost’s pesky human flaws as from the evil forces he begins to uncover. (When, in one key scene, the writer looks at himself in the mirror and mutters “bad idea,’’ you know he’s going to go ahead with it anyway. Take it as you will, but Polanski knows we’re slaves to our worst impulses.)

Lang’s most controversial act as prime minister was allying himself with America’s wars in Afghanistan and Iraq - any resemblance to Tony Blair not coincidental at all - and the links between 10 Downing Street and US interests run invisible and deep. As the Ghost mines his subject’s past in interviews and increasingly secretive fact-finding missions, ugly truths gleam through the murk. “The Ghost Writer’’ is about learning to read between the lines of history, and of other people, and of other people’s manuscripts.

That makes the film sound like a political screed, when it’s anything but. Directing with deliciously cool flair, Polanski stages the film as an uneven battle of wits between a terrier and a roomful of tigers. McGregor deftly manages to keep us on the hero’s side despite our misgivings - the Ghost has prospered in life because he’s likably spineless - and there are choice turns by Tom Wilkinson, James Belushi, and dear old Eli Wallach, frail but still noodgy at 94.

The heart of “The Ghost Writer,’’ though, is the couple at its center. This Pierce Brosnan is a new one on me: expansive, dismissive, charmingly cruel, he wields power like a professional athlete. Adam Lang is Silvio Berlusconi in the body of Jack Kennedy; anti-war protesters are demanding the ex-prime minister’s head on a pike and he shrugs them off like flies. The man was born to lead, but in the name of what? One of the movie’s many grim jokes is that it doesn’t really matter.

For her part, Olivia Williams takes back some screen real estate after a few too many mousy roles (the teacher in “An Education’’ being the latest), and one of the pleasures of “The Ghost Writer’’ is watching Ruth Lang reveal infinite sides to herself one claw at a time: ignored wife, frustrated insider, forlorn lover, and so on. The movie implies that only dullards like the Ghost have one persona, and if they were smart they’d be content with it.

The larger enjoyment of the movie is finding ourselves in the hands of a genuine filmmaker. How rare that is today - a director who simply knows where to place the camera for maximum unsettling effect, who can coach actors to give their dialogue some topspin, who shapes a sequence so that what we don’t see is as important, more important, than what we do. Maybe this is a little like Bernini making a sculpture out of toothpicks, but craft is in the making, not the materials.

That said, you notice the toothpicks in the last few scenes of “The Ghost Writer,’’ as the pieces of the puzzle fall tartly but not unexpectedly into place and matters come to an appropriately Polanskian head. The movie’s a light cruise to the dark side, and it may be evidence that the director’s brittle, alluring pessimism has become so ingrained it doesn’t bother him any more. “The Ghost Writer’’ takes place on the Vineyard and in London, but it’s really set in Chinatown, and Chinatown is where its maker has made his home.

Written by: Polanski, based on a novel by Robert Harris