Most Dangerous Man in America: Daniel Ellsberg and the Pentagon Papers 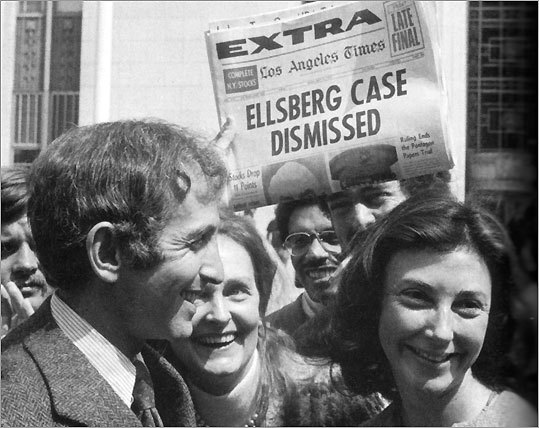 Toward the end of “The Most Dangerous Man in America: Daniel Ellsberg and the Pentagon Papers,’’ you begin to realize just how much four decades of history owe to one man.

If Ellsberg, a Defense Department-contracted policy analyst, hadn’t leaked 47 volumes of top secret CIA documents to the press and Congress in early 1971, the Vietnam War might have continued indefinitely. Broad public sentiment wouldn’t have finally turned against the conflict, and the Nixon administration wouldn’t have adopted a paranoid bunker mentality. The president wouldn’t have formed his dirty-tricks squad of White House “plumbers’’ to stop the leaks, wouldn’t have sent them out to dig up dirt on Ellsberg by burglarizing his psychiatrist’s office. The Watergate break-in wouldn’t have happened. Nixon wouldn’t have resigned.

And so on, and so on - no historic 1971 Supreme Court First Amendment case, no politicizing of the nation’s press for better and worse - and all because one stiff-backed ex-Marine refused to ignore his conscience. “The Most Dangerous Man in America’’ - the epithet comes from Henry Kissinger - is hardly evenhanded: It views Ellsberg as a hero and a genuine patriot and allows him, at a grey and dignified 78, to narrate his own story. But evenhanded is one thing and fair is another, and directors Judith Ehrlich and Rick Goldsmith make their case that if you or I had known what Ellsberg did - the secret story of US involvement in Southeast Asia and the cynical misleading of the American public by five presidential administrations - we would have, or should have, done the same.

The movie has been nominated for a 2010 Oscar for best feature documentary, but it plays like a solid suspense thriller when it’s not stooping to cheesy touches: doomy atmospheric music and a pair of embarrassingly crude animated “reenactments’’ are the worst offenders. We learn that Ellsberg was there at the Pentagon when President Lyndon B. Johnson used the Tonkin Gulf non-incident as a pretext for escalation in 1964; that two years working in Vietnam for the State Department opened Ellsberg’s eyes to the unwinnability of the war; that a subsequent stint at the RAND Corporation think tank included contributing to a landmark CIA study of the conflict that frankly exposed machinations and manipulations from President Truman on. Of course we were never supposed to see it: It was an in-house confession.

After painful soul-searching, Ellsberg decided to release the CIA study to the public. With help from RAND colleague Tony Russo and his own teenage children (to the understandable outrage of his ex-wife), he photocopied 7,000 pages over several months. He sent them to Senators William Fulbright and George McGovern and heard nothing. Only then did Ellsberg decide to go to The New York Times.

This is when “The Most Dangerous Man in America’’ kicks into high gear, as Times editors and lawyers discuss their own decision-making agonies. The Nixon administration filed an injunction to cease publication of what quickly were dubbed “the Pentagon Papers,’’ Ellsberg went underground, and over a dozen other newspapers (including The Washington Post and The Boston Globe) picked up the torch. At one point, Senator Mike Gravel of Alaska filibustered 4,000 pages of the report into the Congressional record. The secrets were out.

This is meaty, dramatic stuff - see this movie with your teenagers and watch their jaws hit the floor - and the filmmakers cannily use President Nixon’s secret tapes to bolster their case, letting us hear him raging about “that [SOB]’’ Ellsberg, OK’ing the hiring of E. Howard Hunt to head up the plumbers (“He can do it - and I’ll direct him myself’’), and proposing to drop nukes on North Vietnam (“I want you to think big, Henry’’).

In the process, Nixon shot himself in the foot, so tainting the government’s case against Ellsberg and Russo that the judge declared a mistrial. The sadder irony - noted by Ellsberg but glossed over by the film - is that the release of the Pentagon Papers became bigger news than what was actually in the papers. “The Most Dangerous Man in America’’ ends on a note of triumphant populism, but the film’s bitter aftertaste hints that when we ignore the details, we only ensure they’ll be repeated.

The Oscar-nominated documentary "The Most Dangerous Man in America" recounts the 1967 story of the leaked Pentagon Papers and the man who did it.

THE MOST DANGEROUS MAN IN AMERICA: Daniel Ellsberg and the Pentagon Papers Directed by: Judith Ehrlich and Rick Goldsmith