‘Most Dangerous Man’ is just fine with Ellsberg 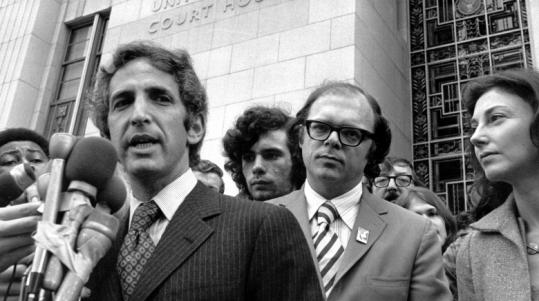 Daniel Ellsberg in 1973 outside the US Court House in Los Angeles.
(Associated Press)
By Mark Feeney Globe Staff / February 7, 2010

Secretary of Defense Robert McNamara commissioned the Pentagon Papers, a secret history of the Vietnam War, in 1967. Daniel Ellsberg, a RAND Corp. analyst and Pentagon consultant, photocopied its 7,000 pages and leaked them to The New York Times in 1970. When the Nixon administration enjoined publication, Ellsberg leaked them to The Washington Post, The Boston Globe, and other newspapers.

A new Oscar-nominated documentary, “The Most Dangerous Man in America: Daniel Ellsberg and the Pentagon Papers’’ recounts the story. It opens in Boston Friday. Speaking by telephone recently from his Berkeley, Calif., home, Ellsberg, 78, talked about the papers, the documentary, and his love of the movies.

Q. How does it feel to be a movie star?

A. [Laughs] That’s a good question. I haven’t gotten the full feeling yet, since the movie’s not in wide theatrical release. There was a time, 40 years ago, when I was very recognizable. And that lasted for several years.

A. He did a good job! He caught this obsessive quality that I have and my intensity. As I said to my wife the first time I saw it, “Did I look that good?’’ She was played by someone comparably beautiful to her, Claire Forlani, so that was nice to see.

Q. When you were photocopying all those documents four decades ago, could you ever have foreseen this?

A. I was offered many times back then to have movies [made] or books or whatever. And I passed them up. I didn’t want to be seen to be making money off of secrets. At the time [the story] would have been a feature film.

Q. Who would have played you?

A. I don’t remember the movie people of that day, so I’d have to be reminded. But could I have foreseen the fame? I figured it was possible. But it would depend on the reactions of the government. And that turned out to be true.

Q. When you watch the movie, does it seem like 40 years have gone by?

A. Unfortunately, I’m watching it at a time when [similar] events seem to be happening again, day by day [in Afghanistan]. The documentary is like watching the evening news. Seeing the movie - the bombs dropping from the planes - it just made me shudder, reliving that. That’s the main feeling I have. Not that it takes me back, but that history is being reenacted.

Q. What do you think of the film?

A. I was just stunned at some of the archival images they found. That clip they found, for example, of me going down the stairs behind Robert McNamara!

A. I like Errol Morris, whom I’ve met. But I know he was afraid that if he got too probing McNamara would flee. So he was pretty permissive of McNamara, who didn’t reveal much, or say anything that wasn’t already in “The Pentagon Papers.’’ But what I did find amazing was the early footage where McNamara discloses he was involved in the largest atrocity of all time, by body count, the fire-bombing of Tokyo in March 1945.

Q. The late Howard Zinn says in the documentary that you’d seen “Butch Cassidy and the Sundance Kid’’ seven times and that that’s what you went to see the night before the Times published the papers.

A. Four or five times, not seven. It’s a terrific movie. I just bought the DVD at Costco. I saw it and said, “Oh, I just can’t pass this up.’’

Q. The documentary’s title comes from Henry Kissinger once calling you “the most dangerous man in America.’’ Do you consider that libelous or complimentary?

A. Oh, well, from Kissinger I love it. I wanted them to think of me as dangerous and maybe affect their policy.

Q. “Most Dangerous Man’’ is a nominee for best documentary Oscar. Will you go to the ceremonies?

A. Well, they have very limited tickets.

Q. I’m sure they could find you a seat.

A. Seriously, I don’t know. If invited, I’d love to go. I love movies. I go to all of them, good and bad. I liked “It’s Complicated’’ and “Invictus’’ and “The Blind Side.’’ “Invictus’’ I liked very much. I had very mixed feelings about “Avatar.’’

Q. You must have picked up on the Vietnam vibe.

A. I thought some of the political aspects of it were too obvious. The idea that the solution for the indigenous people there was to take up arms and beat the helicopters and tanks was unrealistic. It was too cartoonish, even though I could agree with the politics.

Q. What else have you seen?

A. I liked “Youth in Revolt’’; that was very funny. I liked “Crazy Heart.’’ “The Hurt Locker’’ is a brilliant movie. Some people feel it’s an antiwar movie. Interestingly, I didn’t see it that way at all. I think it’s a very good recruiting movie for the armed forces. As a former Marine . . . I’m well aware of the adrenaline rush that combat really does deliver. People who want that will see that in the movie and say, Hey, that’s what I want. I really do think there are people who’ll see that movie and think, I’ve got to sign up.