No complications for Meyers 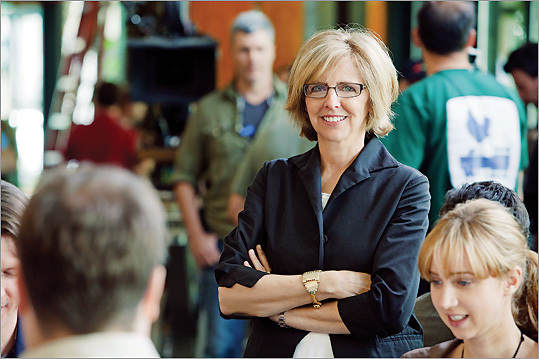 Writer-director Nancy Meyers says she knows what she wants and how to achieve it. (Melinda Sue)
By Amy Kaufman Los Angeles Times / January 1, 2010

HOLLYWOOD - Inside her home - just like on the sets of her films - Nancy Meyers rules the roost.

On a recent December afternoon, Meyers welcomed a camera crew and a couple of journalists and photographers into her expansive Pacific Palisades residence to discuss her new film, “It’s Complicated.’’ One photographer asked the writer-director if he could take her picture outside in her courtyard. She declined, saying the lawn furniture did not have any pillows.

Instead, she opted to pose in a chair in her living room. Just as she sat down, her assistant let her know that Jack Nicholson was on the phone, calling to apologize for missing an industry screening of the movie the previous night. “I have to take this,’’ she said, bouncing out of the chair. She returned 10 minutes later, and a makeup artist dusted some light rouge across her cheekbones while a stylist combed a wayward chunk of hair back into place.

“Should I smile? Look serious? Give me some direction,’’ she said, readjusting her button-down shirt so it wouldn’t crease. She peered up at a light, questioning if it would cast a shadow underneath her chin. “You know, on a film set, if I had one of my lighting guys trying to light that high, I would kill him.’’

Meyers, 60, knows what she likes - and her willingness to go after it, coupled with a rigorous attention to detail - has helped her to claim a spot as one of the leading female directors in Hollywood today.

She’s one of the few filmmakers who consistently crafts movies that appeal to adults, especially women, an underserved audience. Her films tend to be about women as well - mature, typically affluent professionals who are concerned with their families and greatly desired by multiple suitors.

“What Women Want’’ (2000), which starred Mel Gibson as a man trying to understand the female psyche, became the most successful film ever directed by a woman, grossing upward of $370 million worldwide. Meyers’s follow-up, 2003’s “Something’s Gotta Give,’’ chronicled an unlikely relationship between a couple played by Nicholson and Diane Keaton. That film, and her 2006 feature “The Holiday,’’ featuring Kate Winslet and Cameron Diaz, both pulled in more than $200 million worldwide.

Her latest, which opened Christmas Day, stays right in Meyers’s sweet spot. Meryl Streep’s Jane is a divorced mother of three with her own bakery who is surprised to find herself entangled in a messy affair with her ex-husband Jake (Alec Baldwin). She also has eyes for Adam (Steve Martin), the endearing architect helping her remodel her kitchen.

Donna Langley, cochairwoman of Universal Pictures, said the studio “courted Nancy pretty heavily’’ for nearly a year before Meyers pitched the script, which she had been writing for about seven months in her home office.

“I’m quite diligent about the work process,’’ Meyers said, curling into one of her couches. “I think a day’s work is a real day’s work. Three hours isn’t real to me. My friends make fun of me, because I really think I have to sit there all day and get up for lunch and come right back. This is my job.’’

That work ethic is also evident on set, said Langley.

“One thing that is great about Nancy is that she is so clear-minded about the story she wants to tell and how she is going to tell it,’’ Langley said. “She puts an extraordinary amount of effort and detail into the movie, from the set decoration to the production design. She’s methodical about it.’’

John Krasinski, who plays the husband of one of Streep’s daughters in the film, said he found Meyers’s precise nature helpful.

“She has an incredible eye, from what the croissants look like to the shirt you’re wearing underneath your sweater,’’ he said. “She does a fair number of takes, but that’s what I look for in a director. If you know what you want, at least you are chasing something, rather than doing a lot of takes for absolutely no reason.’’

“I really respect her writing, and I try to do it the way it’s written,’’ said Martin, who previously worked with Meyers and her ex-husband Charles Shyer on the two “Father of the Bride’’ movies. “Sometimes, I have a minor issue or suggest a joke here and there, which she may accept or reject. You can see her running over it in her head. She’ll sort of look up to the sky and envision it.’’

Meyers makes no apologies for her sometimes obsessive attention to detail.

“The most important thing is that I get what I feel the movie needs,’’ she says. “I’m the one in the moment who has been entrusted with the job of getting the movie to work.’’