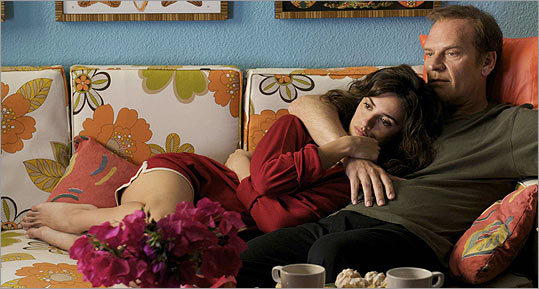 All love is movie love in Pedro Almodóvar’s “Broken Embraces.’’ The film’s emotional climax involves two hands caressing a projected image. It’s both ridiculous and ridiculously romantic, which is an apt description of a work shaped like a heart and structured like a pretzel.

Those hands belong to a blind mystery writer named Harry Caine (Lluis Homar). Once upon a time, Harry used to be Mateo Blanco, a successful, sighted filmmaker, who in the early 1990s was making the same overcaffeinated Technicolor sex capers that Almodóvar was during the same period.

Mateo changed his name and vocation, after losing his sight and the love of his life in an accident. His libido, however, seems fine. The story begins in Madrid in 2008, where Harry is seducing then making living-room love to a chesty creature he’s just met on the street. (His blind lust hits the bulls-eye so impeccably that there’s every reason to think he’s faking.)

A quick scan of the newspaper one day reveals that the businessman Ernesto Martel (José Luis Gomez) has died. Harry’s electronic reader recites the obituary, and it’s proof of how commonplace sensuality is in this world that the sound of a robot’s uninflected voice advancing the story counts as exotic.

The reason Martel’s death means anything to Harry is that Lena is the very woman he lost. Yet she became the star of his final film, a Almodóvar-lite concoction called “Women and Suitcases.’’ She persuades Martel to produce the movie, but he becomes threatened by the possibility that the director is once again drawn to his star.

Almodóvar’s entertaining solution to the obvious and the inevitable is to turn the proceedings into a meta-movie soap opera. Martel’s swishy adolescent son Ernesto Jr. (Ruben Ochandiano) snoops for his father under the guise of making a production documentary. Junior becomes a peeping tom, recording Lena and Mateo falling in love. The tattling footage, which Martel watches on the edge of his seat, has no sound. So he hires a lip-reader who does her job with hilarious mercilessness. She’s the human equivalent of Harry’s robotic translator.

As ever with Almodóvar, “Broken Embraces’’ is as much a movie as a cinematic nesting doll, with stories arranged inside of stories and tones planted within tones. (Ingeniously, Ernesto Jr.’s documentary is a romance that for Martel is a thriller and for us is a comedy.) On both sides of the film, Harry/Mateo’s right hand, Judit (Blanca Portillo), rolls her eyes and frowns, forever a woman with a secret. Eventually, she explains, although Portillo’s stoic performance seems to telegraph the news well before Almodóvar makes it official.

The trouble is that “Broken Embraces’’ never comes to a boil. These characters seem to move laterally through time, and the many red herrings, including some nightclub asides with Judit’s DJ son (Tamar Noves), seem to be here because Almodóvar loves that color of fish. By the time Judit and Harry begin to clarify the past in long mono logues, you wonder why, with all the other narrative intricacy, Almodóvar needed the confessional explications, too. The talking is meant to heal and unburden, but it only congests the proceedings.

It hardly ruins them, though. Almodóvar has complete control over the entire affair. He’s not trying to elevate himself to new thematic or emotional ground. He’s descending from the Olympus he reached in 2002 with “Talk to Her.’’

In fact, both Almodóvar’s movie and Mateo’s seem nostalgic for Almodóvar’s popular but least interesting stretch of work - from 1988’s “Women on the Verge of a Nervous Breakdown’’ to 1993’s “Kika.’’ It feels like a lark. And after having given Cruz her best role in 2006’s “Volver,’’ the director opts this time to treat her like a Hollywood mannequin. Various wigs turn Cruz into Audrey Hepburn and Marilyn Monroe, and some rough business with Ernesto is straight from a film-noir dream.

The laziness in these allusions is inversely proportional to the passion that has produced them. This is where a love of rapturous imagery takes over. “Broken Embraces’’ is drunk on its divinely sexy and sinister compositions. Two figures, for instance, writhe beneath a form-flattering sheet in a way that would make Magritte blush. And the sight of Cruz talking to a guilty filmed projection of herself is inspired.

Only a corpse could watch this visual pageant and feel no joy. In sending a set of hands caressing that image projected onto a wall, Almodóvar captures the fundamental inadequacy of certain moviegoing experiences. Sometimes seeing simply isn’t enough.

At: Kendall Square and Embassy