Alvin and the Chipmunks: The Squeakquel

‘Squeakquel’ almost lives down to its name 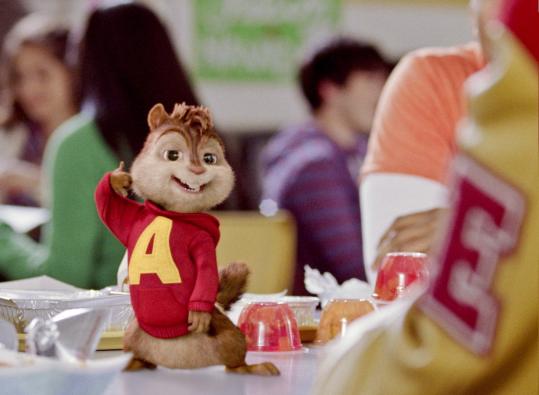 You may hate them, I may hate them, but someone loves those singing chipmunks, and it’s not just the heirs of Ross Bagdasarian, the guy who dreamed them up 50 years ago. 2007’s “Alvin and the Chipmunks’’ rebooted the franchise to the tune of $217 million, and thus we have the inevitable “Alvin and the Chipmunks: The Squeakquel,’’ which is almost but not quite as obnoxious as its title. Little kids will love it. You’ll need a hazmat suit.

“Squeakquel’’ offers the same mixture as before: live-action humans, computer-animated Tamias striatus, and junk Top 40 musical numbers sung in painful dentist-drill close harmony. This time we get six chipmunks instead of three, as Simon, Theodore, and Alvin (respectively voiced by Matthew Gray Gubler, Jesse McCartney, and Justin Long) are joined by the Chipettes, Brittany (Christina Applegate), Eleanor (Amy Poehler), and Jeanette (Anna Faris). Any individuality the actresses bring to their roles is obliterated by the sped-up vocals.

Where’s Dave Seville? Luckily for actor Jason Lee, the chief chipmunk handler has an Alvin-induced accident in the opening sequence and spends the rest of the movie in a Mexico City hospital bed, literally phoning in his performance. His replacement at home is nephew Toby (Zachary Levi of “Chuck,’’ doing his career no favors), a layabout whose job it is to get the ’munks to high school. Comedian David Cross again plays meanie music exec Ian Hawk with more exposed chest hair than is necessary.

If there’s anyone having fun here, it’s Wendie Malick as the school principal, a closet Chipmunks junkie with the tattoo to prove it. Most of “Squeakquel,’’ though, is as formulaic as they come, with rote scenes of school hallway mayhem followed by sub-Nickelodeon moral lessons (stick by your family; don’t be a jerk), followed by a frenetic race to the big singing contest.

The target audience, ages 4 through 8, will be very, very happy. Older siblings and parents will wish they were elsewhere. Grouchy middle-aged movie critics may or may not be alone in considering this evidence of the near-total bankruptcy of modern pop culture.

Actually, it would be perfectly acceptable family product (as opposed to a movie) if not for the script’s witless co-opting of Beyoncé songs and outdated hip-hop slang. When Alvin opens a cupboard and exclaims, “Holla! The cheeseballs are in the hizzouse!,’’ “Squeakquel’’ opens up a whole new field of cultural offense: digital rodent blackface.

ALVIN AND THE CHIPMUNKS: The Squeakquel

At: Boston Common, Fenway, suburbs, the insulation in your attic