‘Salmon’ doesn’t reel in the laughs 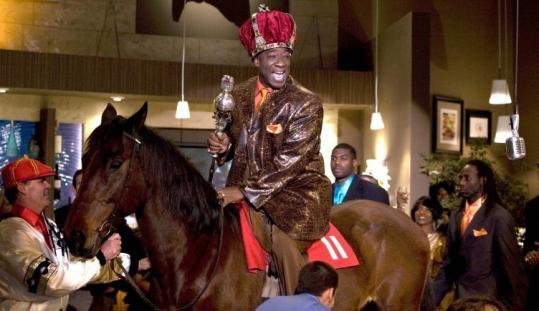 When is a comedy not a comedy? When it’s not all that funny.

“The Slammin’ Salmon’’ is the latest effort from Broken Lizard, the five-member filmmaking comedy group of Jay Chandrasekhar, Kevin Heffernan, Steve Lemme, Paul Soter, and Erik Stolhanske that gave us “Super Troopers’’ and “Beerfest.’’ It’s a troupe not exactly associated with highbrow laughs to begin with. Still, “The Slammin’ Salmon’’ hits some low notes.

The threadbare premise disintegrates if examined too much. Ex-heavyweight boxer “Slammin’ ’’ Cleon Salmon (played by Michael Clarke Duncan) is the owner of a trendy Miami seafood restaurant, the Slammin’ Salmon. He needs to pay off a gambling debt, so he forces his waitstaff to sell $20,000 worth of food in one night. The winner gets a pile of cash. The loser gets beat up by the champ.

First-time director Heffernan (who also plays the beleaguered restaurant manager Rich) seems to be aiming for “The Office’’ set in the food industry - a quirky ensemble cast of work colleagues, none too savory, who compete for the dough.

There’s Rich, who accidentally eats the dessert embedded with a customer’s engagement ring. (Half of the movie is spent waiting for the diamond to, uh, reappear at the other end.) There’s busboy Donnie, who chugs Blue Curacao all night and becomes, get this, drunk. There’s Nuts, the nerdy waiter who becomes either an OCD freak or an uninhibited ham -whichever is convenient - when he forgets to take his meds. There’s even a cameo by Morgan Fairchild.

Much of the weight falls on Duncan’s shoulders. He’s traveled far from his gentle-giant role in the “The Green Mile.’’ But Duncan’s got all the comedic timing of a Rolex flattened by a steamroller.

Considering the action takes place over the course of one night, the choice to shoot the entire movie on a single interior set - the restaurant - was a risk. This might have worked for an intimate drama, but it spells claustrophobic death for a comedy, particularly one that relies on slapstick. It’s like being trapped in a nightclub and forced to endure an endless improv skit.

While a few chuckles bubble to the surface, “The Slammin’ Salmon’’ is half-baked. This reviewer’s advice: Send it back.