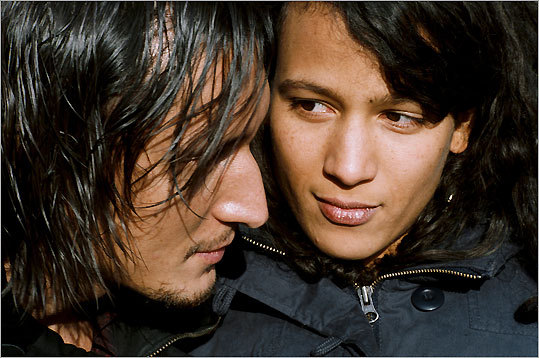 I don’t want to know how Claire Denis makes movies. Her magic is her business. But I imagine the process is like sculpture. A block of story is whittled and carved until only what’s essential remains. With her, the whittling is a seductive technique. Only in the final scenes of her latest bewitchment, “35 Shots of Rum,’’ do we know for certain how the four main characters fit within each other’s lives or even what that title is all about. Until then, we do a lot of gleaning.

It takes a handful of scenes just to learn the name of the man we see watching the trains and enjoying a cigarette in the film’s jazzy opening minutes. It’s Lionel.

Lionel drives for the RER, whose tracks wend into Paris and its suburbs, and the camera rides the rails with him. As played by the wonderful Alex Descas, he’s a handsome and resolutely taciturn middle-aged fellow. When a glum former co-worker spills his troubles, Lionel keeps his eyes on the tracks, offering only a sentence of support.

He shares his apartment with his daughter, Joséphine (Mati Diop), a beautiful young university student who has a job toiling at what must be the loneliest Virgin Megastore in France. Some nights Jo comes home and one of her neighbors is entering her own flat, annoying Jo with a comment or something she remembered. We’ve already seen the neighbor, an older, harder beauty named Gabrielle (Nicole Dogué), driving her taxi around the city, grousing about the piddling fares: Doesn’t anyone want to go to the airport?

Some mornings Jo wakes up and Noé (Grégoire Colin), the vaguely sleazy young gentleman in the penthouse, is inviting himself along for a run. Our guard goes up. He wears his designer shirts unbuttoned to the middle of his chest. His hair is greasy. He’s frequently packing a bag to dart off somewhere. And you can all but smell his cologne.

But Noé is a great example of the movie’s enveloping sense of trust. We take our cues about how to respond to him from Jo, who seems unbothered by his cheesiness but drawn to his smolder. They appear, in fact, to have some kind of connection.

Except for Noé, these are working-class French people of African descent. And there’s a thrill in the way Denis sees their brownness without dwelling on it. Nor does she exalt in forcing nobility upon them. These are extraordinarily everyday people in all their complexity.

Even when the movie flirts with overt commentary on the marginalization of European immigrants, the men and women we meet here feel thoroughly rooted in modern France.

These characters could have sprung from the family-centered universe of Yasujiro Ozu , whose “Late Spring,’’ about a father letting go of his daughter, turns 60 this year. “35 Shots of Rum’’ has Ozu’s watchfulness, but Denis pushes for filmmaking that’s less rigidly formal and more immersive.

The bits-and-pieces vagueness is true to the fragmentary way we actually get to know strangers. We enter this movie with the relationships well established. There’s no need for Denis, who wrote the film with Jean-Pol Fargeau, to supply us with expository dialogue since these are characters who spend many of their waking hours with each other.

Instead, events and conversations float toward us until the fragments begin to approximate something whole. A sabotaged drive to a concert strands Lionel, Jo, Gabrielle, and Noé in a little African restaurant, and their time there, which culminates with two separate sexy dances to the Commodores’ “Nightshift,’’ clarifies a few things and complicates others.

In Denis’s movies, which include “Nenette et Boni,’’ “Trouble Every Day,’’ and, her two greatest, “Beau Travail’’ and “The Intruder,’’ dancing has a way of bringing truth out of characters. In “Beau Travail’’ (1999), the dance a French Legionnaire performs alone in a nightclub is like watching a soul leave a body and ascend to disco heaven.

The ambiguity here never mutates into confusion. Denis hasn’t built a mystery, even if the nature of certain things remains ambiguous. Her emphasis is on both the characters - how they choose, what they feel, whether they’ll be completely forthcoming with each other - and the rhythms of their lives. More than once we see Lionel, Jo, Gabrielle, and Noé walk through their front doors, remove their outerwear, and prepare a meal (rice cookers figure sentimentally). Denis excels at putting tiny bumps in these roads - or, in one very sad case, a body on the train tracks.

Every scene is an essential ingredient for a film interested in mood, feeling, need, nourishment, and proximity - that last one being the most powerful ingredient of all. I liked these characters, and suddenly not having them in my life anymore, simply because Denis has decided to start the closing credits, devastated me. It’s all part of her grand illusion of emotional proximity. I was closer to them than I ever knew.

Written by: Denis and