Seeing the good one man can do 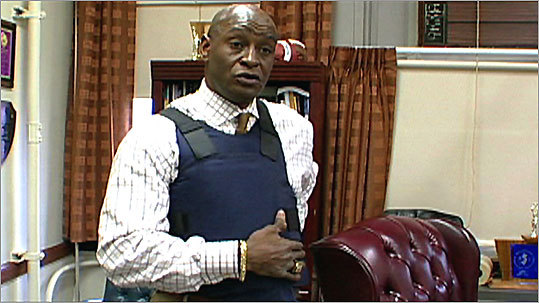 ‘Heart of Stone’’ is a heartbreaker: a documentary about an inner-city high school that shows how hard, how necessary, and how infinitely rewarding it can be to open doors for kids who didn’t know they were there. Technically the movie’s nothing much, but it makes Hollywood dramas like “Stand By Me’’ look tame and insipid.

The location is the blast site known as downtown Newark, and the school is Weequahic High, located at the flashpoint where Blood meets Crip. A majority of male students are gang members; the city’s police director considers them all criminals, period. Why should anyone care about them? Because when you do, amazing things happen.

The twin forces of light at Weequahic are principal Ron Stone and the school’s alumni association, the latter made up almost entirely of white middle-class Jews. Until the Newark riots and ensuing white flight crippled the neighborhood in the late 1960s, Weequahic was one of the country’s finest schools; the members of the alumni association, remembering the bonds between blacks and Jews in the years leading up to the civil rights era, refuse to let their alma mater sink.

They provide scholarship money and fund trips to Europe for kids who’ve never left their neighborhood. Principal Stone is charged with fighting the daily fight. A bullet-headed son of Newark who recalls his own battles with racism, he considers it his job “to provide options.’’ “Heart of Stone’’ focuses on his relationships with three students, all gangbangers and all smart enough to articulate the dead ends they see themselves heading toward.

Rayvon is a Crip; Sharif and Ricky are Bloods. Stone’s accomplishment, achieved mostly by walking out the door and into their lives, is to position these three as peace-making leaders to their peers while forging respect and friendship between them. Watching “Heart of Stone’’ forces audience members to completely recalibrate what they think they know. For one thing, it views gangs partly as a positive force, providing at least some emotional support and community to young men whose fathers are long gone and who society pointedly ignores.

Gang life also kills these kids, obviously; not a student at Weequahic hasn’t lost multiple acquaintances to bullets. Stone wants to take that kernel of self-respect and transfer it to the educational system and the world beyond, and because he talks straight at the students rather than down to them, they listen. He knows individual pride comes from school pride and orders the football coach to build a winning team in three years. (Really? OK, done.)

Director Beth Toni Kruvant spends a lot of time sketching in Newark’s history - cue the obligatory cameo by Philip Roth, Weequahic class of 1950 - and sitting at the table while the old gang chews the fat. One of the alumni is Hal Braff, father of actor Zach Braff (who gets an executive producer credit here); another is the model for Russell Crowe’s cop character in “American Gangster’’ and, in his own words, a “tough [expletive] Jew.’’ They’re all charming, and they all understand they’re not the main order of business.

Getting Rayvon into college is the main order of business. Trying to talk the boy into accepting an offer from Seton Hall, Stone tells him “People have shot at you and you’re still standing. What kind of fear can a schoolbook put in you?’’ And Rayvon still hesitates. That’s how terrifying the world can seem when all you know is Newark.

“Heart of Stone’’ makes you realize the vast amount of good one person can do and the widening number of lives he can change for the better. If the film’s quietly shocking ending is not at all what one has hoped for, neither is it hopeless. Rather, it’s Ron Stone’s challenge laid right at our feet.