In ‘Surrogates,’ living the simulated life 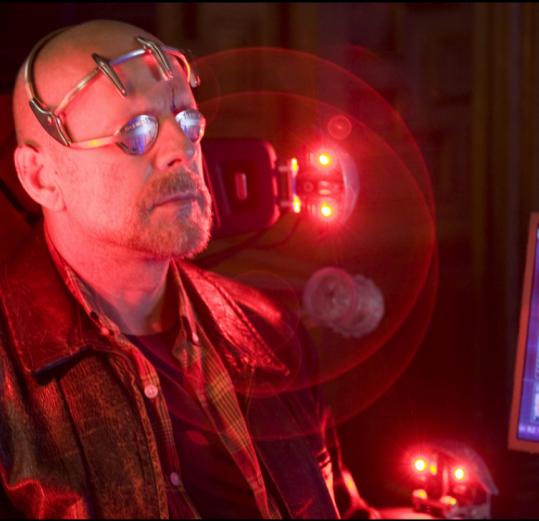 With breathless lines of dialogue like “Their brains were liquefied in their skulls!’’ - referring to onscreen characters, not the audience - it’s awfully tempting to let “Surrogates’’ review itself. In fact, the latest Bruce Willis futuristic action rama-lama is a reasonably watchable sci-fi B movie, a case of a good director and some intriguing ideas struggling to overcome formula plotting, limp dialogue, and a serious case of the sillies. Give credit to filmmaker Jonathan Mostow for keeping the movie on track; give credit to star Bruce Willis for keeping a straight face.

Willis plays Tom Greer, a FBI agent of the near future, when 98 percent of the population stays at home while their robotic Surrogates - replicants that look like younger, prettier versions of their owners - go to work and play, feeding the sensations back to the atrophying humans hooked to their stim-chairs. It’s sort of like “The Matrix’’ turned inside out, and we’re our own worst enemy.

The boilerplate plot involves a chase after a dastardly superweapon - it looks like a flashlight - that fries Surrogates in public while killing their humans at home. Greer and his partner (Radha Mitchell) follow the trail of carnage all the way to a tribe of anti-Surrogate Luddites (led by Ving Rhames in dreadlocks), a corporate conspiracy and other nefarious doings, leading to a race against time to push a computer key that will save the human race.

Against such nonsense, Mostow comes up with some impressive visual ways to convey the radical social disconnect caused by the Surrogates. Their faces have been given a CGI makeover, for one thing, so that they all look like extras from “The Polar Express.’’ A subway car full of Surrogates heading home from work is an eerie sight that may hit home with anyone who’s had a bad day; a glimpse of hundreds of soldiers fighting an overseas war from their stim-chairs is a frightening notion the movie doesn’t pursue.

Actually, there are ideas abandoned by the wayside throughout the movie, sacrificed to plot illogic and a too-short running time. Is the film’s message that we’re already too jacked into our computers and Blackberrys? If so, it’s left on the cutting room floor. At least we finally get Willis with and without hair in the same movie - the unconvincingly toupeed one is the Surrogate; the balding, beaten-up one is “real.’’ The actor, God love him, gives both roles his all - the mark of a B-movie trouper.

Among its other eccentricities, “Surrogates’’ offers a day-after-tomorrow picture of Boston that doesn’t jibe with the city as most of us know it, despite creative location filming all over the greater metropolitan area. It’s one thing to put the hero’s apartment in the South End’s Cathedral Housing projects; it’s another to reclaim the entire South Boston waterfront as an anti-robot wasteland. Good luck getting Anthony’s Pier 4 to move.

Written by: Michael Ferris and John Brancato, based on a graphic novel written by Robert Venditti and Brett Weldele