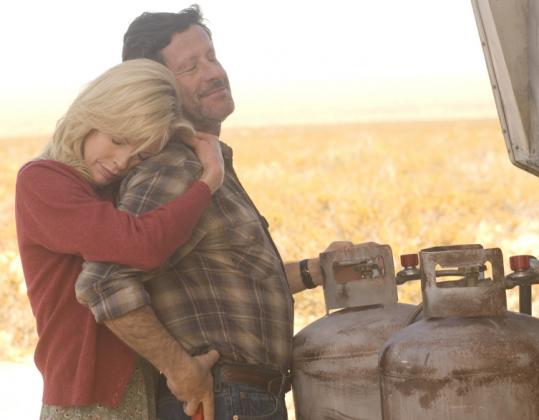 Early on in “The Burning Plain,’’ Charlize Theron tells a friend that she has a new beau. “Do I know him?’’ the friend asks - then quickly adds, “Do you?’’ It’s a great line, indicating everything we need to know about how unmoored Theron’s character is.

“The Burning Plain,’’ in substance if not style, updates the classic weepies Bette Davis specialized in during her heyday. It has adultery, teen love, not one but two highly charged mother-daughter relationships, and a heroine (Theron) who really has problems with emotional commitment. There’s also a crime of passion, on which all three of the film’s story lines hinge, but the passion is even more familial in nature than sexual. To go into the plot in any detail would reveal several crucial twists.

It’s a story with all the makings of sumptuous, Sirkian melodrama. Instead, writer-director Guillermo Arriaga (best known as the writer of “21 Grams’’ and “Babel’’) makes the movie into an exercise in writerly technique. He plays off dry, brown New Mexico, where Theron’s character lived when young, against her present home, damp, gray Oregon. And he shuffles those multiple story lines with the intentness, if not dexterity, of a three-card monte dealer. The result is a movie that’s emotionally flat and technically tricky.

Theron is good, but ever since “Monster’’ she’s been on a Serious Actress Addressing Serious Issues kick that’s begun to seem like automatic pilot. Unvaried solemnifying can be as harmful to a career as unvaried frivolity. Get this woman the lead in a stylish, grown-up comedy (assuming that Hollywood ever makes another one)! A reunion with Woody Allen might be in order (assuming he’s still capable of making a stylish, grown-up comedy).

Kim Basinger, as Theron’s mother, is surprisingly affecting. The peculiar resemblance she now bears to Diane Lane reminds us that the indiscriminating removal of wrinkles is not necessarily a good thing. Jennifer Lawrence plays Theron’s character as a teenager. It’s a thankless task. A person can change a lot in 14 years. But there’s no way a person can change enough to convince anyone staring at them on a big screen that Lawrence could grow up to be Charlize Theron. The best performance here comes from a Mexican child actress, Tessa Ia, as half of one of the fraught mother-daughter relationships.

She displays a severity and control - an authority - that even Theron visibly defers to. Burning but never plain, Ia embodies the unemphatic power Arriaga presumably sought in the rest of the movie.

THE BURNING PLAIN Written and directed by: Guillermo Arriaga