‘Love Happens’ seeks to blend cute with the Big Cry 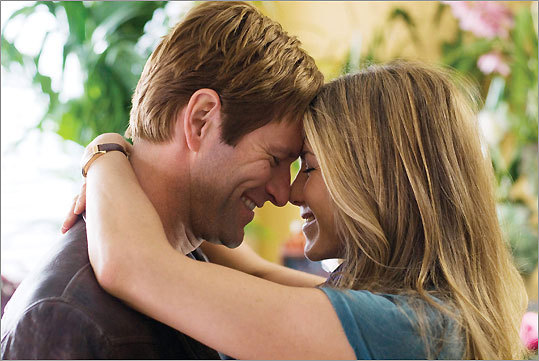 ‘Love Happens’’ is being sold as a romantic comedy but it’s really a Big Cry movie. You know the genre: main characters who’ve suffered tragedy and lost touch with their emotions, who get redeemed by love and a few well-orchestrated crises, who lead the audience in a big, cathartic bawl at the end. It’s a tricky balancing act: Beg for sympathy too early and you’ve got corn chowder; pour on the tears too heavily at the end and it all comes apart like a wet Kleenex.

Brandon Camp’s movie doesn’t make the first mistake but trips badly over the second. It helps that he has two likable stars: Aaron Eckhart as a psychiatrist who has turned his grief over his wife’s death into a self-help cottage industry and Jennifer Aniston as a free spirit who runs a flower store.

They meet cute - Burke smacks into Eloise in the hallway of a Seattle hotel where he’s giving a seminar - and court cuter, but Eckhart gives his lines an edgy topspin and Aniston is well within her narrow comfort zone.

On hand as the required “wacky’’ best friends are Dan Fogler (playing Burke’s agent) and Judy Greer (as Eloise’s assistant). It’s formula but sometimes the formula works. For about half its running time, “Love Happens’’ looks like the kind of date-night headcheese you can live with.

There’s trouble a-brewing, though, not least Martin Sheen in the role of Burke’s father-in-law, glowering on the horizon like an uneasy conscience. As Burke’s “A-OK’’ seminar progresses through a long weekend (and as the agent pursues a mega-deal that could turn his client into the next Dr. Phil), “Love Happens’’ turns its attention to all the emotional gunk the hero is repressing, even as he’s coaching others to let it all hang out. The movie’s so blunt in its greeting-card symbolism that Burke even has to rescue his wife’s pet bird and let it fly free.

That scene’s pretty funny, admittedly, but it’s the last gasp of lightness before Camp and co-writer Mike Thompson open the floodgates and turn “Love Happens’’ into glycerine therapy. Not that the grieving process shouldn’t be addressed in a movie, but this one feels increasingly cooked up. Burke’s built-in illogic - he’s a sensitive soul building a business on his wife’s death? - becomes hard for even the actor playing him to ignore, and in the final scenes Eckhart throws in the towel and shamelessly pimps for our tears and approval.

By then the movie has become one of those sticky dramas that use working-class stiffs (John Carroll Lynch as a grieving construction worker) and hipster bohemians to lend the white-bread main characters a soul and credibility they lack on their own. Eloise has just about vanished by this point, but the movie trots her out one last time so Burke can turn up at her store for an apology scene boiled down from the last five Hugh Grant movies. “Love Happens’’? So do other things, but I can’t say what they are in a family paper.

Written by: Camp and Mike Thompson