A different dimension of dark animation 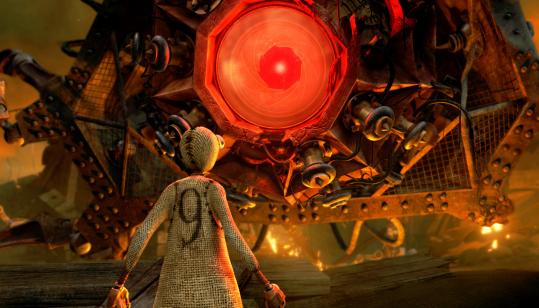 Elijah Wood gives voice to the title character, one of nine puppets - called stitchpunks - that hold the key to restoring humanity in a post-apocalyptic world. (Focus Features)
By Wesley Morris Globe Staff / September 9, 2009

“9’’ is just about the only animated movie this year not to be released in 3-D. But it flaunts meticulous design and downbeat color scheme (browns, blacks, glowing toxic greens) that provoke a similar response. At least twice, my hand motioned toward the screen to touch what I saw. The wax in a stub of a candle, the grooved grains in a piece of wood that passes for a pair of hands, the bird’s skull that serves as a helmet. It’s a stupid but involuntary response, the way some art makes you want to touch the canvas. You’re tricked into believing in the tactility of what is so obviously only visual.

The movie, conceived and directed by Shane Acker, is computer-animated but moves in the lifelike jerkiness of old-fashioned stop-motion. Acker brings us another story of a world on its post-apocalyptic last leg, only this one, imaginatively enough, is populated solely by machines and a collection of nine living puppets called stitchpunks, which might put a smile on many a science fiction writer’s face.

The stitchpunks are the final vestiges of an elaborate metaphysical science experiment, and they hold the key to restoring humanity, which has been reduced to these puppets. “9’’ is set in a bombed-out city (it feels like London after a nuclear blitz), and begins with the awakening of the puppet whose name gives the movie its title and whose voice belongs to Elijah Wood.

Nine was the last of these science experiments. His number is inked across his back, and he gradually discovers that he is not alone. He meets, among others, the efficient 2 (Martin Landau), the oafish, one-eyed 5 (John C. Reilly), the imperious, rather cowardly elder statesman, 1 (Christopher Plummer), and 3 (Jennifer Connelly), an adventuress who’s game for anything. They wear their numbers, too, and, after 2 goes missing, they band together and take on the rampaging machine - a giant metallic arachnid - that appears to want their souls.

The tale is spare (Acker has harvested this 79-minute film from his Oscar-nominated short), which means there’s time to marvel at the many splendid details. All the puppet and monster parts are found materials. Nine is made of burlap. He’s built like a pear. His hands are wooden, his fingers metal. Each of the dolls has a different fastener stitched onto his front: 9’s zips up (and down), 1 has metal snaps, 2 has laces, 5 has buttons. Each puppet has goggles for eyes. The centers are camera shutters, but each has been customized to express its owner’s personality. One’s shutter, for instance, opens at a much slower aperture. Nothing this homemade should be this sophisticated, and yet it is.

Tim Burton is one of the producers of “9.’’ The Russian director of “Night Watch,’’ “Day Watch,’’ and last summer’s Angelina Jolie action contraption “Wanted,’’ Timur Bekmambetov, is another. That they’ve tapped Acker to join their gang is testament to the grandeur of Acker’s sunless vision. He wrote the movie with Ben Gluck, and Pamela Pettler, who also wrote Burton’s stop-motion musical “Corpse Bride. “9’’ also recalls Terry Gilliam, Chris Marker, Jan Svankmajer, and the Quay brothers - some contortions of “Pinocchio’’ and “The Wizard of Oz’’ too. (There’s a terrific sequence in which the surviving stitchpunks mount an LP of “Somewhere Over the Rainbow’’ on a phonograph, riding its crank up and down in short-lived bliss.)

These allusions and influences don’t get in the way of the movie’s originality, though. What I loved about “9’’ is how much evident care its makers have put into it. I suppose the folks behind “Ice Age: Dawn of the Dinosaurs’’ care just as much about craftsmanship and visual authenticity. But you also watch it fully aware that they’re OK with turning apocalypse into a Happy Meal. It’s a synthetically tidy, somewhat insincere entertainment.

Any optimism in “9,’’ which is bound to try the fortitude of meeker children, feels hard-won. It actually ends in a bittersweet mystery. The film’s finale suggests that the human race could indeed be restored. But in doing so it leaves several intriguing reproductive questions unresolved.