Caught up in caricature development 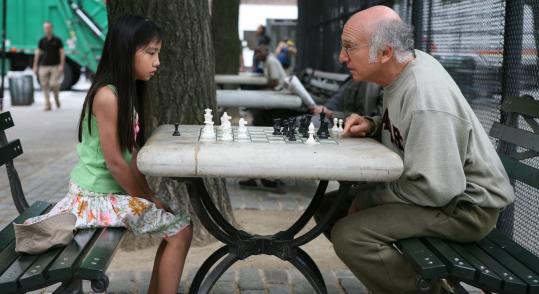 ‘Whatever Works’’? That sounds like Woody Allen’s approach to his career these days. The 73-year-old director made his last film in Spain because that was where the money was; his new one is based on a script written three decades ago for Zero Mostel and pulled out of mothballs when a writers’ strike loomed last year. Allen’s habit of getting a movie into theaters on a stringently annual basis has become a nervous tic, much like his latest hero’s obsessive-compulsive hand washing.

Quantity is no guarantor of quality, as anyone knows who saw the grim “The Curse of the Jade Scorpion.’’ “Whatever Works’’ is very minor Woody, querulous, fitfully funny, and removed from any shared reality. It feels like one of his lesser early plays or a New Yorker sketch padded to fill the contours of a feature film. And it confirms what the last decade of his movies has hinted at: The weakest part of any new Woody Allen movie is when Allen himself is onscreen.

In “Whatever Works,’’ that extends to Larry David, the actor cast as the director’s stand-in this time. He’s playing Boris Yellnikoff, a former Columbia University physics genius who has retreated to lower Manhattan and a bottomless sinkhole of cynicism, but in flailing hands and plaintive yawp, he’s all Woodman. On HBO’s “Curb Your Enthusiasm,’’ David gives self-serving bile a nearly heroic stature. Here he’s just a crank.

The movie’s ostensibly about what happens when this bitter pill takes in a stray: Melody St. Ann Celestine (Evan Rachel Wood), a young runaway from Allen’s blinkered idea of the Deep South. Moving onto his couch and into his life against Boris’s better judgment, Melody’s a perky cheerleader gone bad and she absorbs her savior’s bleak pessimism like a sponge. He’s all irony and she has none; they’re attracted to each other like two magnetic Scotties. In short order they’re married.

No, it doesn’t make much sense. “Whatever Works’’ lacks the relaxed eroticism of “Vicky Cristina Barcelona’’ (for which we should probably be grateful), but it also dances nervously around the dirty old man’s fantasy at its center, one that at this date Allen really needs to own up to. No such luck: The character of Melody is thin and wholly untenable - she’s like a farmer’s daughter in a joke told at Katz’s Deli - and Wood never finds a way to make her human.

Thank God for Patricia Clarkson, though. When the actress turns up as Marietta, Melody’s Bible-thumping mama, Allen stumbles onto the true theme of “Whatever Works’’: the transformative power of his beloved New York. Without giving too much away, Marietta discovers her inner bohemian in ways that neatly spear the pleasures and pretensions of the downtown art scene, and when her ex-husband (Ed Begley Jr.) follows her to Manhattan, he’s due for a makeover, too.

The gag is that only in New York, that cultural island floating serenely off the coast of America, can a soul find its true expression. “Whatever Works’’ is the movie equivalent of the famous Saul Steinberg map of America, 12th Avenue followed by Kansas and the Pacific Ocean, and it finds its beating heart in Marietta’s grin as she stretches languorously between two lovers in one bed.

The final 30 minutes of the movie are close to a delight, in fact, if you can ignore the fact that Allen’s New York no longer resembles the real thing. (Five years in Europe will do that.) “Whatever Works’’ even builds to an awkward yet warm-hearted finale, one that faintly echoes the closing scenes of “Hannah and Her Sisters.’’

By then, though, you may be struck by the heretical notion that Boris isn’t really necessary to this story, and that “Whatever Works’’ would have only worked if its director had written his trademark self-caricature out of it. Over the decades, Allen’s egotism has been both his great creative strength and his artistic blind spot. Here, once again, it hits the wall.

"Seinfeld" and "Curb Your Enthusiasm" funny guy David takes on a big role for Woody Allen.

Written and directed by: Woody Allen